Why Every "Rick and Morty" Fan Should Check Out "Solar Opposites"! 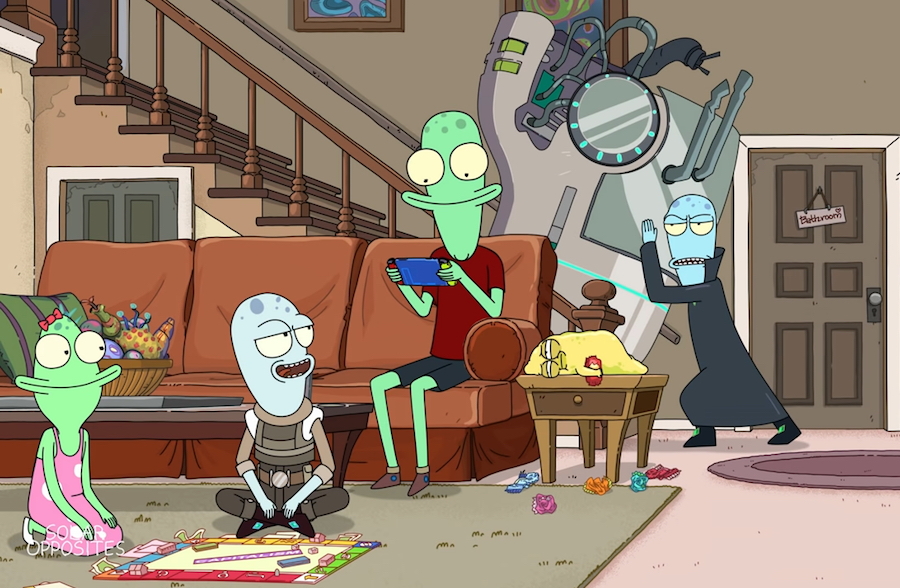 Unfortunately, "Rick and Morty" has wrapped up airing new episodes for the year, but don’t worry, fans of intergalactic misadventures, there’s still hope!

"Solar Opposites" premiered earlier this year on Hulu, and it’s produced by Justin Roiland, who also just happens to be  a co-creator of "Rick and Morty" and voices both Rick and Morty’s characters. In "Solar Opposites" he voices Korvo, an alien with potential anger issues, who thinks Earth sucks. The show is about two male aliens, one incredibly cynical about the Earth and the human race, and another who is an endless ball of optimism. Then there’s the two young clones of the aliens and the pupa of the family. The aliens have crash-landed on Earth and now must try to blend in with the residents of Earth.

If you need your "Rick and Morty" fix, here are some reasons to give "Solar Opposites" a try!

There’s a fair amount of commentary on human nature on "Rick and Morty". This is seen in the Season 2, Episode 5, “Get Schwifty”, in which the entire town turns into a cult with human sacrifices. It was all because they didn’t understand giant heads that appeared in the sky who were just trying to get the Earth involved in an intergalactic version of "American Idol". You have to watch the show to get it. This episode is a commentary on man’s tendency to put his own meaning on something when he sees none, no matter how ridiculous his interpretation may be. The show also constantly takes jabs at human nature through the eyes of Rick, its most cynical character. Rick is constantly jabbing at human nature and man’s tendency to pretend he gets things he doesn’t really understand.

"Solar Opposites" continues Justin Roiland’s analysis of human nature through the human zoo that Yumyulak and Jesse created and keep in their bedroom. Essentially, Jesse and Yumyulak have shrunk humans who they deem jerks down to about 6 inches tall and have put them in zoo-like cages in their bedroom for observation. Very quickly, the human zoo turns into a setting for a miniature Hunger Games involving adults. But while some residents resort to killing each other and even cannibalism, it’s not all doom and gloom. We see a human who Yumyulak had shrunk down in Episode 2 who was scared and confused by his situation turn into a competent survivalist in Episode 3. He had still held on to his morals enough to help a son find an insulin shot for his father and help other humans out with surviving the human zoo. The creators were possibly trying to comment on the duality of man with this. While he will always do whatever it takes to survive, empathy still exists within him. This is as optimistic a view on humanity as we’ll ever get from the mind of Justin Roiland, so we might as well accept it!

Korvo and Rick have incredibly similar personalities. They both hate the human race and think that they’re better than everyone else. It might not be a coincidence that Justin Roiland chose to voice Korvo just as he voices Rick. However, there is one key difference between the two characters -- While Rick’s condescension over the human race is unwavering, Korvo sees at least some beauty within it. In Episode 1, he falls so deeply in love with a kid's show character that he creates a clone of the character for himself. He sees that humanity can create great things, whether it be in the form of a sentient mammalian troll meant to entertain kids or otherwise. In Episode 3, he runs for mayor of his town just to get people to like him. Korvo’s craving of approval from the human race shows that he is capable of seeing good in them and wants to be a part of that good, although his neediness for approval from humans only lasts for one episode. Korvo, of course, still hates humans but he is occasionally able to see a shred of good in them, while Rick is disgusted by all of humanity at all times.

So, maybe, if you like "Rick and Morty" but it’s at times too dark and cynical for your taste, give "Solar Opposites" a try! It's now streaming on Hulu.