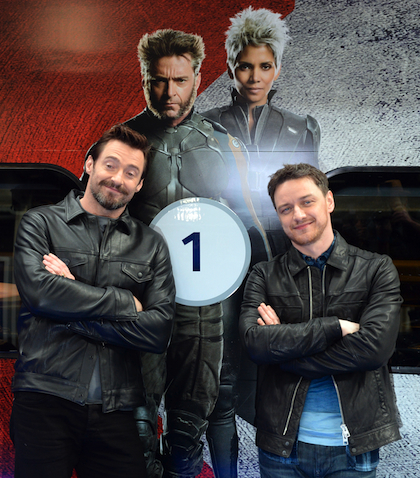 Well, I’ll jump right in off the bat here and say that I went into X-Men: Days of Future Past incredibly guarded. I didn’t watch it with merely a grain of salt but a sack-load of it. To give you a clear understanding as to why I was suspicious of this film, I’ll give you a brief history of my torrid relationship with the X-Men movies...

In the summer of 2000 (holy crap, I was still in high school when this franchise started!), the world was given X-Men, and for all intents and purposes, it was pretty good but not great. However, you had to give credit to Bryan Singer considering his schedule for making the movie was damn near slashed in half and he had to finish it in a rush. So, he made the best movie he could with what he had to work with. Luckily, X-Men went on to do some decent business at the box-office and made Hugh Jackman (and his abs) a household name, so the studio executives had the amazing idea of letting Singer do a sequel, only this time, they would actually give him some time to work on it. As a result, we got X2: X-Men United, and the world cheered. Needless to say, that movie was friggin' amazing, and up until now, it was easily the best X-Men movie and one of the best comic book adaptations ever. And then, alas, Singer left the series to make Superman Returns so X-Men: The Last Stand was put into the hands of Brett Ratner. I think when mentioning X-Men: The Last Stand, that a moment of silence is fairly appropriate. Let us all observe that now.

Anywhoo, after the interesting science experiment that was X-Men: The Last Stand, Fox thought it would be a good time to focus on individual X-Men by giving them their own movies. The obvious choice was, of course, to make the first one about Wolverine, and so the world was given X-Men Origins: Wolverine. Well, after the tears subsided, those fine foxy folks at Fox decided that maybe, in their next X-Men, movie they should try featuring a group of X-Men like we were used to seeing. This time around, Bryan Singer was on hand to produce the film, and Matthew Vaughn, the director of Layer Cake and Kick-Ass, was brought onboard to direct it. X-Men: First Class was pretty universally loved, although I found it a little lacking in terms of design and action. I will say that the best parts about that movie were the performances and, in particular, the character development of our two leads, with special kudos going to James McAvoy. Everyone else in the film, including Michael Fassbender and Jennifer Lawrence, were good as well, but McAvoy was the MVP from that film. Then, suddenly, almost out of nowhere, came The Wolverine, and I thought that it was pretty good. But with my X-Men movies, I’m afraid that I’m not willing to settle for "pretty good" or "decent". I saw first hand with X2 how absolutely amazing these movies can be, and I damn well wanted more.

Well, I’m happy to say that I got exactly what I wanted, as X-Men: Days of Future Past is a marvelous return to form and majorly indicative of not only what the X-Men movies are capable of but what comic book movies in general are able to accomplish when some thought and effort are put into the story. Now, if you read my article on Captain America: The Winter Soldier, then you might hear a few familiar things, because both movies do allow the drama of the characters to drive the story forward as opposed to the action set pieces. But whereas The Winter Soldier was an excellent action/adventure movie on a small scale, Days of Future Past is an absolute epic in every sense of the word. The scope and stakes of this movie are huge and presented to us in the form of an incredibly horrific and bleak future for all of mankind. And no, it’s not a future where Godzilla has won Best Picture.

I don’t want to go into too much detail on the plot, but needless to say, the story does involve time travel and we are given a fair amount of time in both the future and the past. In a lesser movie, the scenes of the future would probably outshine the generic-looking ones that take place in the past, but the story is so well constructed here that production design, as awesome as it is, really takes a backseat to the wonderful plot progression and character development. Once again, James McAvoy walks away with the MVP trophy as he is truly the heart and soul of this film. But ultimately, this is an ensemble piece, and everyone from Michael Fassbender and Jennifer Lawrence to Nicholas Hoult and that Hugh Jackman guy deserve praise for their work. And, of course, let’s no forget the man who is responsible for bringing the film to us in the first place. Bryan Singer has once again been able to strike a lovely balance with this film between the dreadfulness, high stakes tension, and the light humor that is eventually needed to let the audience know that it’s okay to actually enjoy the film. As I said before, the action scenes do not drive this story, but it is the story that drives the action scenes and makes them all the more enjoyable and exciting because we actually care about what’s going on with the story. X-Men 3 was supposed to be his greatest and most exciting X-Men movie, but unfortunately circumstances took that away from him. Now, he is back and he is showing the world with Days of Future Past just what he is truly capable of in the realm of cinema.

This movie is on par with The Avengers in terms of it’s sheer spectacle and enjoyment. However, in terms of depth and soulfulness Days of Future Past exceeds that film because, at the end of the day, the final climatic scene of the movie doesn’t find itself hinged on a bomb about to explode, a city about to crushed, or an asteroid about to hit earth. No, at the end of the day, it comes down to two people talking. Two characters in a major personal conflict trying to reason with each other because they both think that what they are doing will ultimately benefit everyone. The beauty of these X-Men movies (the good ones at least) is that they always allow you to step into the shoes of the “villains” and walk around for a time. You truly understand their point of view, and, in some instances, it even seems like their methods might be necessary. That’s because this film contains true characters that have been carefully constructed and expertly portrayed. With Days of Future Past, you don’t get the lazy cookie-cutter drama that you are used to seeing during the Summer Blockbuster Season, and for that reason alone, the bar has been raised high in regards to the standards of these types of films.

But why listen to little old me? Get your behinds to your nearest multiplex and have yourself an awesome time with X-Men: Days of Future Past.

(Also, check out this interview with McAvoy at the YH Studio!)