What Will Be the Fate of Jon Snow on "Game of Thrones"? 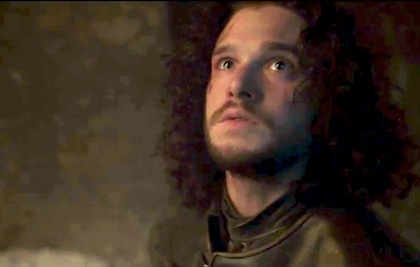 Hey listen, if you haven’t seen the episode by now or at least heard about it, then I can’t help you!

Anyway, as most of you SHOULD know by now, “Game of Thrones” Season 5 ended on Sunday night with the shocking(?) death of Westeros’s reigning Prom King, Jon Snow.

ICYMI,here’s the scene in question.

Looks pretty cut and dry, doesn’t it? It seems much the same way in the books as well. Even Kit Harington has gone on record to say that he’s definitely not coming back. And yet people still refuse to believe it’s true. Why? Why the denial and speculation?

Well, sweet summer children, I am here to educate you.

Let’s look at how all this goes down in the books – first of all, it’s important to point out the REAL reason why the Night’s Watch decided to mutiny against Jon in the first place, and it had nothing to do with a pre-teen boy's grudge (Olly does not exist in the books… thank the gods). On the show, we’re led to believe that Jon got shanked because… um, he was nice to the wildlings? Seems like if that was really all they were mad about, they could have at least deposed him as Lord Commander and taken another vote or something, no? You would also think that whole (non-canon) battle at Hardhome would be enough to rouse the men to Jon’s cause too, since, you know, they now have like a HUNDRED witnesses that the white walkers are real and coming for them and that re-enforcements at the Wall are necessary, even if they are wildlings.

But no. In the books, the white walkers are still considered a myth, more or less. There was no Battle of Hardhome to solidify their existence. Yes, the Night’s Watchmen were indeed miffed with Jon for allying with the wildlings, but that was just the tip of the iceberg that led to Jon’s stabbing. There was also the little detail of Jon, um,deserting his post so that he himself could ride to Winterfell to personally kick Ramsay Bolton in the nuts. You see, Ramsay sent Jon a taunting letter (known in fandom as The Pink Letter) wherein he tells Jon that Stannis has been defeated (not true, sorry show-watchers) and demands fealty from Jon and the Night’s Watch, otherwise he’s gonna cut out his heart and eat it. Jon’s not about that life, so he crumples up the letter and tells his men he’s peacing out for Winterfell with some wildlings and asks for volunteers from the NW. Instead of joining him, they instead decide to get stabby with him, though they are admittedly kinda sad about it.

And that’s where we leave off. It’s also important to note that, in the books, Stannis leaves Selyse, Shireen, and Melisandre behind at the Wall, and all three of those ladies are still alive and well at this point (ahem).

While there’s no official confirmation, A Song of Ice and Fire authorGeorge R.R. Martin has more or less indicated that Jon will indeed be featured in his next book, The Winds of Winter. So, within fandom, it’s not really a question of whether or not he survives but HOW he survives. The prevailing theory (and the one that I subscribe to) is that Melisandre calls upon the Lord of Light to bring Jon back to life. This theory seemed to have been confirmed by Melisandre’s (miraculous) reappearance at The Wall on the show just in time for Jon’s shanking. (And now that we know that Shireen will definitely get the torch in the next book [though not in the same context as the show], there’s now speculation that Mel will sacrifice Shireen to save Jon.)

HOWEVER… there is another theory amongst book fans. This is how Jon’s chapter ends in the book A Dance With Dragons:

“Jon fell to his knees. He found the dagger’s hilt and wrenched it free. In the cold night air the wound was smoking. ‘Ghost’, he whispered. Pain washed over him. Stick them with the pointy end. When the third dagger took him between the shoulder blades, he gave a grunt and fell face-first into the snow. He never felt the fourth knife. Only the cold…”

His last word/thought is of his direwolf, Ghost. Contrary to what the show has told us, Bran Stark isn’t the only one who can warg into their wolf – all the Stark kids can, including Jon. So, the alternate theory goes that Jon warged into Ghost as he was dying (hence why he didn’t feel the fourth knife) and that his spirit lives on through his direwolf.

That would certainly explain why Kit Harington has been insisting that he is not returning to the show. Indeed, he, the actor, might not be returning, but Jon might still be alive, via his wolf. Though, like I said, the show never established Jon as a warg, so I’m not sure how they would convey this.

At any rate, the showrunners of “Game of Thrones” have all but thrown out the books at this point anyway, so literally ANYTHING can happen going in to Season 6. Is Jon Snow still alive? George R.R. Martin says yes, but that carries little weight these days. We’ll just have to wait until next spring to see what the showrunners decide.