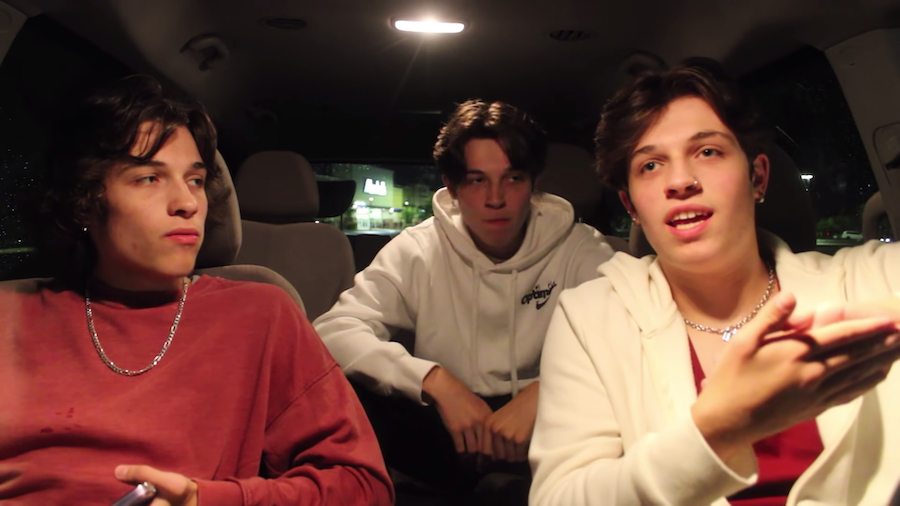 If you’ve been scrolling through Tiktok or looking for new hilarious YouTube channels to watch recently, chances are you’ve heard of the Sturniolos. Matt, Chris, and Nick Sturniolo are 19-year-old triplets from Boston who are best known for their casual car videos in which they discuss random topics like the best breakfast foods and dipping sauces. In a matter of months, the boys have garnered 2.92 million YouTube followers as of this writing thanks to their high-energy and effortless hilarity.

In order to gauge what type of content fans would like to see, the boys post polls on their Instagram account, letting followers decide discussion topics for their videos. These conversation starters paired with their sheer curiosity, contagious laughter, and chaotic energy make every video extremely engaging.

Matt, the middle sibling and only brother with his license, sits in the driver’s seat.

Although Nick, the eldest, sits in the back, he steers the conversation and takes charge of editing the videos.

Now that we’ve covered the basics, let’s get into some of the best Sturniolo clips that will make you want to run to YouTube and soak up every single moment of all of their videos.

On July 15th, the boys released a video entitled “don’t correct our grammar” in which a large portion of the conversation focuses on their favorite condiments. When Matt’s hatred for ketchup is brought to the forefront of discussion, a round of hypothetical questions are sent Matt’s way to determine just how deeply he dislikes the condiment. It becomes immediately apparent that the boys don’t have triplet telepathy. When Nick asks a question that prompts an answer in the form of a measurement, Matt’s random response of “baby tomatoes” leads to a discussion which gets Nick fired up. This particular section of the video went viral on TikTok, and people couldn’t get enough of the complete chaos.

Then there’s their video entitled “REACTING TO FAN FICTIONS ABOUT US *uncomfortable*”, which went viral due to the boys becoming majorly invested in a fanfiction piece starring themselves. While Nick reads the story, Matt and Chris act out the scene, a performance which fans joke is “Oscar-worthy”.

Not only are the Sturniolos natural storytellers and entertainers, but they also utilize their platform to share vulnerable sides of themselves, offering advice and validation to fans when it comes to topics such as mental health and sexuality. The boys are all extremely open and honest with their fans. In their YouTube videos and various other social media posts, Chris touches on stress and loneliness, Matt talks about his anxiety, and Nick shares his coming out journey.

In this clip, Matt opens up about his various types of anxiety, showing fans with similar struggles that they are not alone.

In their video “COMING OUT STORY TIME *very personal*", which was posted almost exactly a year ago, Nick sits in the driver’s seat and shares his coming out experience. Chris and Matt are by his side, and at the end, the triplets express that fans who need someone to talk to about their sexuality are more than welcome to message any of them on social media. The boys are extremely willing to personally support their fans.

The Sturniolos are the real deal — high-spirited, goofy, sweet, and relatable all at the same time. We are so proud of how far they’ve come and can’t wait to see their future content!