TV Families We Would (and Would NOT) Want to Spend the Holidays With! 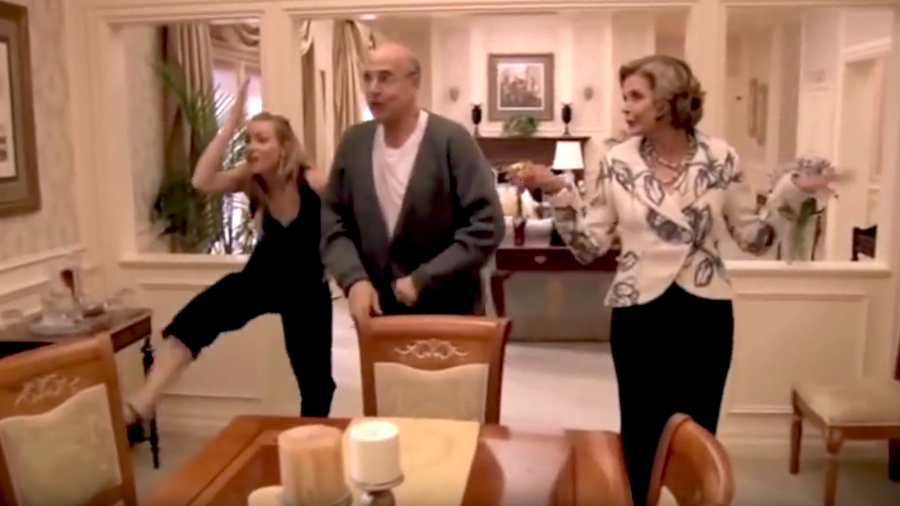 What are the holidays without family? And what, for that matter, are long-running TV shows without families? Some remind us of our own, for better AND for worse, and like it or not we live through them vicariously every week for 30 minutes to an hour. With Thanksgiving coming in mere days, and Christmas just around the corner, let's take a look at three TV families we would love to spend our holidays with... and two we would rather choke on a turkey bone than be in the same room with!

This whacky sitcom family has a lot of issues, but despite the matriarch, Beverly, being a complete nut job, she does love her family. Even more importantly, she’s a great cook and welcoming to guests who want to eat -- so long as you don’t try to tell her kids Adam, Barry, and Erica that they are anything short of amazing. Because of this, who wouldn’t want to spend the holidays with the Goldbergs? Well, maybe if the father, Murray, would put on some pants when he watches TV...

This family may be full of degenerates -- starting with the single patriarch, Frank, of this six-child family. They drink, get high, complain about the government, and come up with ways to scam the system to keep their heads above water. Coming from an Irish-American family, I can safely say that this pretty much feels like home to me. Of course I would love to spend the holidays with this family, because even though they are gutter trash, they do look out for each other.

The Shahs ("Master of None", Netflix)

Honestly, “Master of None” didn’t give us much of a sense of either of Dev’s parents' cooking skills. All we know of Dev’s mom, Nisha, is that she doesn’t like Chinese food and his dad, Ramesh, loves most of it. With that said, this is one instance where, if the kid cooked instead of the parents, it’d probably be awesome, because Dev’s homemade pasta in the episode “Mornings” looked so dope. Outside of that, the family dynamic seems fun to me, and it’d be interesting to see them during the holidays. Ramesh, played by Aziz Ansari’s real pops Shoukath Ansari, was a scene stealer throughout his the season. He seemed like such a fun dude to hang around that if Dev continues to deny Ramesh help with updating his tablet, I’d happily catch a flight from LA to NYC just to give the guy a hand. Plus, who wouldn’t love it if Eric Wareheim’s Arnold showed up and added some insanely stupid dialogue to the meal?

“Westworld” is one bonkers show about robot cowboys and the rich people who love to shoot them that I find a lot of fun. One stand-out, though, is Dolores Abernathy and her robot family. Being that they live in “Westworld”, they are programmed to follow certain storylines throughout their days. When we first meet Dolores, she’s the daughter of a dairy farmer and, provided there are no interruptions, is doomed to live the same day over and over again where her family and her love interest Teddy are brutally murdered by either local robot bandits or rich people joining up with the bandits for fun. This really doesn’t seem like a fun way to spend any holiday, especially given the fact that Teddy gets killed quite routinely, even if he doesn’t make it back to the ranch with Dolores. First X-Men 3 then The Notebook… man, nobody wants any of James Marsden’s characters to win!

One of my favorite shows of all time but clearly one of the families I would least like to do anything with, let alone spend the holidays together. If the constant lack of communication leading to horrible outcomes for everybody involved isn’t enough, then the backstabbing they hurl at each other on an episodic basis would make the cast of “Game of Thrones” cringe. There is a saving grace, however, as I would bank on the Bluths getting Thanksgiving completely wrong and think a chicken is close enough to being a turkey, and we all know how well they can do a chicken impression.

The Boltons (“Game of Thrones”, HBO)

Say what you want about the Lannisters and their history of familial betrayal, murder, and incest, but the Boltons are hands down the worst family in Westeros. Sure, we don’t know about them having any incest, but the torture, flaying, and castrations of their enemies (or, in Ramsay’s case, just whoever he feels like) make the Lannisters look like the Brady Bunch. If that wasn't bad enough, the Boltons were in cahoots with the Lannisters and the Freys to execute the Red Wedding, and it was Lord Roose Bolton himself who put the final nail in the coffin (as it were) by personally murdered Robb Stark himself. HARSH. Here’s a prime example of why you don’t celebrate anything with this garbage family.

So what have we learned today? Some families are better than yours, but if you lived in medieval times, all families were pretty terrible.