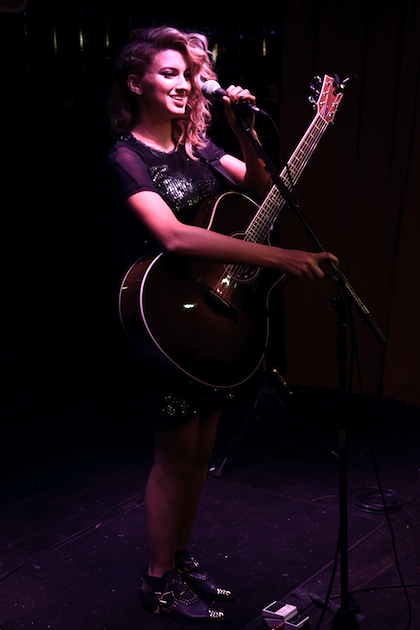 It seems like just yesterday that the beautiful and talented Tori Kelly stopped by the YH studio to deliver a heart-stopping performance of her single “Dear No One”. We knew even then that Kelly’s music would captivate audiences and take the music industry by storm, and transcend her into the bonafide hit selling artist that she has so truly become!

Now, two years later, Kelly has finally released her debut album, Unbreakable Smile, which has deservedly launched her to the #2 spot on the iTunes charts! So, it’s only right to break down this extraordinary piece of work by reviewing this album track-by-track!

Kelly kicks off the album off with a grounded message in this one-minute-and-27-second acoustic prologue, explaining who she really is as an artist and leading the listeners right into the first song that was written for this album.

Fave lyric: "If there’s anybody out there listening to me / All I have is a story and a dream / Here I am and that’s all I can be."

The idea of breaking into the entertainment industry is typically dogged by the idea of conforming to a certain lifestyle and having to alter your inner self. But Kelly makes it clear in this fun and upbeat hit that her true self is not going anywhere! She is determined to remain “just a California girl with big dreams”, and yes, Kelly, you are still singing “songs about real things”! “Unbreakable Smile” was the first song that Kelly ever wrote for this album, which is why she chose it represent the work as a whole.

Fave lyric: "Saying 'Tori, this’ll sell more records' / But I’d rather make ‘em yawn then be a pawn on your chessboard."

Oh, the angst of first love – everyone has been there. This upbeat jam was not only Kelly’s first single from this smash album, or just her first song to hit the Billboard Hot 100, but it’s about the struggle of having a love that was once so addicting that you just can’t seem to let go of it.

Fave lyric: "I try my best to fight it / Say I have you but I always stay."

Kelly is laying down the law, making it known that no amount of money can buy her love! She believes that she deserves to feel rich with actions of pure love and sincerity, as should you! This song is not only filled with so much sass, but the saxophone will be sure to cue the eargasms!

Fave lyric: "We’ve all be taught to chase that dollar / But that’s not on my mind."

Kelly’s second single to hit the charts triggers an emotional pull on the heartstrings. "What ifs" always seem to creep into your mind after an epic love story comes to an end, and Kelly sure knows how to sing about the struggle of missing that special someone.

Fave lyric: "Back and forth like a tug of war / What’s it all for, do I want you back / I still got a flame for ya / Even though you drove me mad.

This song gives me ALL. OF. THE. FEELS. This is Kelly’s first balled on the album, about the first time she let someone in, the first time fear crept into her mind, and the first time she was absolutely petrified to lose somebody. The fear of wanting a relationship to work so badly can scare someone to think of it as the first heartbreak, if it ever fails.

Fave lyric: "I wanna run I wanna stay / Hold every piece so it won’t break / Wanna let go, wanna hold tight / Afraid that I might suffocate."

This track has that Ed Sheeran touch written all over it for sure! When two incredible singer/songwriters like Kelly and Sheeran team up, you know it’s bound to be one killer song. It’s about those relationships that start so sudden and finding that special someone who instantly clicks with you, and you fall madly in love.

Fave lyric: "Touch my soul and hold it tight / I’ve been waiting all my life."

If you are one who believes that there is something greater in this life than the moment you are living in right now, than this song is a must-hear! It’s about not knowing what the future holds, living in the moment, and soaking up every experience that passes by.

This song isn't one of my favorites or go-tos on this album, but you can hear a great range of vocals from Kelly on this track.

This song is DEEP! I want to congratulate and thank every single person who was behind the creation of this track! It is a stripped down, acoustic live version of all of the inconsistencies that occur in the circle of life. Talk about incredible lyrics!

Fave lyric: "If you lose your soul, you’ll lose it all / If you’re at the top, then brace the fall / Surrounded by faces, no one to call."

If you want to talk about a catchy tune, than let’s talk all about the “Art of Letting You Go”. It’s definitely a go-to break-up song if you are in need of one. We tend to fall back to the ones who hurt us the most and want what we can’t have. Kelly belts all about the struggles of moving on.

Fave lyric: "I know you’ll always be the one that stays with me, haunting me / And maybe I’ll never know just how to let you go."

Talk about a jam to throw in your Summer playlist! This is definitely an upbeat, catchy tune that must be played in the car with the windows down, driving past the beach! The track features Kelly reminiscing on a Summer romance at age 17, and LL Cool J delivers, as always!

Fave lyric: "Jumped in the ocean while the sun kissed on me / Was a sucker for them boys with the wild hearts."

When those doubts about a relationship sneak into your mind, play this song. It’s a mid-tempo love song that is about a girl who has been through a lot of struggles with love, but is still open to falling in love again... but slowly.

Fave lyric: "But here I am, just a lot of broken pieces / I don’t plan to leave and break your heart."

This song is my jam! Kelly ends the standard version of the album with this anthem, and I couldn’t be any more satisfied. It has confidence written all throughout it, with the message of doing your own thing and not letting anyone change who you are. Oh, and did I mention Kelly has a sick verse in this track where she is rapping?

Thank you, Kelly, for bringing back an old favorite! Most fans have already swooned over this forthright hit, but for those who have just recently been hooked by Kelly’s exceptional songwriting, take a listen -- you will not be left unsatisfied! This exceptional melody is to all those independent individuals who just secretly want someone to lean on.

Fave lyric: "I don’t really like big crowds / I tend to shut people out / I like my space, yeah / But I’d love to have a soulmate / And God’ll give him to me someday / And I know it’ll be with the wait.

You can’t deny what the heart wants. Distance can be a detrimental factor that can play into staying in a healthy relationship. Especially in this industry, Kelly shares this beautifully written ballad from her own perspective of always being on the go, and knowing that relationships aren’t always all that easy when miles separate one another.

Fave lyric: "But if you go, I think I’ll understand / It’s not that easy holding my hand / But you should know that I miss you all the time / And I wish that I could tell you that we’ll be alright / But I can’t be with you tonight."

Now, excuse me while I digest all of these glorious lyrics that Kelly so kindly graced us with to change the lives of every single one of us. As for you, go click on the video below and watch Kelly slay her “Dear No One” performance at the YH Studio!