Rogue Returns in Special Director's Cut of 'X-Men: Days of Future Past'! 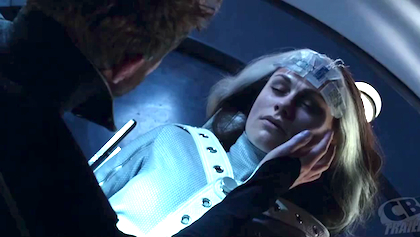 Last summer, the X-Men film franchise was given a new lease on life when Bryan Singer returned to the director’s chair and gave us X-Men: Days of Future Past. The 7th entry into the X-Men series (or 4th, if you’re going chronologically) was an amazing achievement, in that it showcased how a film could be a blockbuster hit without having to lobotomize its own story... or the audience watching it, for that matter. The film also deserves mad props for finally dethroning X2: X-Men United as the best film in the series, which honestly makes it one of the best comic book movies ever made.

If anybody truly wanted to nitpick the film (I mean, that never happens on the internet, right?), then they might notice and become alarmed at the fact that it contains 99% less Anna Paquin than the public was initially promised when the film was first announced and expounded upon in detail. But as the release of the film approached, Singer sadly announced that he had to lop off the entire subplot featuring Paquin’s power-draining heroine, Rogue. Singer revealed that the Rogue subplot created a pacing issue with the film and felt that it should be removed entirely in order to preserve the film’s main story. Writer Simon Kinberg also admitted that he wrote the Rogue subplot into the script so that the older versions of Magneto and Professor X would have a reason to go on one final mission together, but seems to be in agreement with Singer’s reasoning, as he too admits that the subplot did not really “come from the spine of the film” and therefore needed to go in order to redirect focus onto more important aspects of the story.

This, unfortunately, meant that die-hard Rogue fans (I imagine there are some) would be greatly disappointed with the final cut, which resulted in a paltry 5-second glimpse of their sassy southern mutant before she disappeared again like a fading memory caught in a rainstorm (man, I’m deep).

Well, fans can rejoice, because on July 14, an extended version of Days of Future Past will be released on DVD. Yes X-Men: Days of Future Past Rogue Cut will include 17 minutes of deleted footage that will see the discarded subplot resurrected and reinserted into the film. They’ve also just released the first clip from this extended version, which you can view below. And anyone headed to San Diego Comic-Con next week can be the first to see the new cut in its entirety when it is screened on Saturday, July 11.

One of the most successful aspects of Days of Future Past was its ability to continually transition between events happening in the past and the future without causing the film to be too confusing or disorienting. This crosscutting is present in the below clip and, for my money, doesn’t look too shabby at all, although it’s hard to judge an entire cut of a film by only looking at a minute of it. But who knows? Maybe Singer was just overly cautious when he cut Rogue from the picture. Perhaps this restored cut will even exceed the excellent film that was released into theaters a year ago. I can’t imagine that being likely, but stranger things (like the 7th film in a series surpassing its predecessors) have been known to happen.