Let’s face it – the Teenage Mutant Ninja Turtles are lovable goofballs, but they’re also pretty zen. I mean, you have to be in order to be a NINJA and all, right?

But like all great heroes, the TMNTs have their weakness. They’re only reptile/human hybrids, after all. Even Superman has kryptonite. So what is it that brings the Turtles to their knees?

Ah yes, this is a weakness we can all relate to, amirite? Even Macaulay Culkin has an entire band dedicated to the delicious pie. But pizza isn’t exactly without its beneficial merits – in fact, I’d venture to say it’s the PERFECT food for a band of butt-kicking vigilante turtles! You see, I took a neuropsychology class in college, and according to my professor, pizza is actually the perfect food to ingest when working on something that requires a lot of brain activity. There is something about the mixture of ingredients in pizza – the dough, the cheese, the tomato sauce, the pepperoni – that creates a certain chemical release which helps you focus. So, all you kids out there cramming for finals? Cram some pizza in your pie holes too! And you crime-fighting ninja warrior turtles? Pizza it up!

The TMNT’s sensei Splinter must have realized this – why else would he basically raise his adoptive sons on a pure pizza diet?? Well, that and it’s a good way to get them to cooperate…

Anyone who saw the Michael Bay-produced Teenage Mutant Ninja Turtles reboot later this summer remembers the scene earlier in the film when Splinter tries to break his charges’ zen-like resolve by presenting them with pizza, but not just any pizza – the 99 CHEESE PIZZA!

The boys deny that such a thing could even exist, and you might have as well… until now! 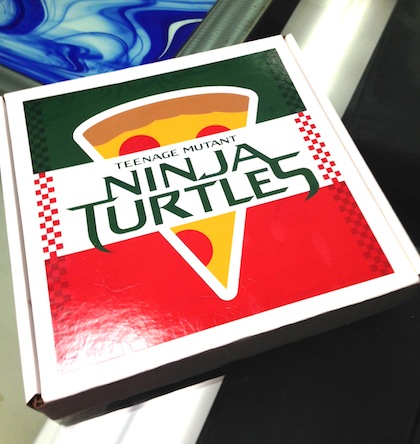 To celebrate the release of TMNT on DVD and Blu-ray today, Paramount has taken up the challenge to bring the mythical 99 Cheese Pizza into a reality. And lo and behold…! 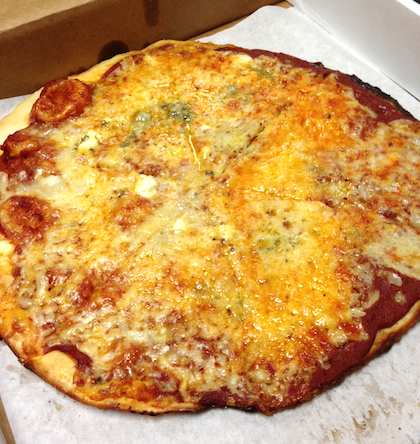 The pie does indeed include NINETY-NINE different cheeses, some of them I can’t even pronounce, including 7-year cheddar, Asiago Fresca, 3 different types of Havarti, Kaltbatch Cave Aged Gruyere, Salemville Gorgonzola, Triple Cream Brie, Truffle Gouda, and, of course, Smoked Mozzarella… just to name a very few. It is indeed a fromagian ambrosia, and it makes me want to fight crime and ace the SATs!!! 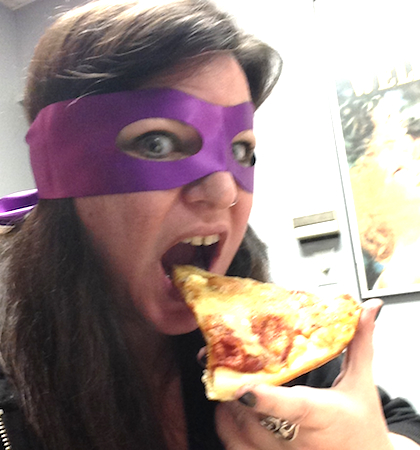 Don't forget to pick up your copy of TMNT today... and a hot juicy pizza to go with it!