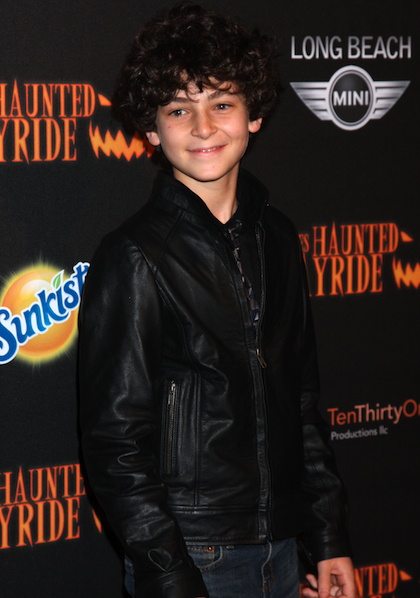 Welcome one and all to The Suggestion Box. This is the series in which I stop pretending to be uninterested in the attention of the Hollywood bigwigs and really, really demand that they pay heed to what I have to say. So, what’s on the chopping block today? Superheroes. Or at least an upcoming show about a superhero... only not really. Alright, I’ll spare you the usual spin around the block and get right to the point.

As some of you more avid comic book fans might’ve heard, Fox just recently announced that they have cast David Mazouz as a pre-teen Bruce Wayne and Camren Bicondova as a teenage Selina Kyle in their upcoming series “Gotham”. This news comes on the heels of other superhero-related tidbits such as a photo released of The CW's new Flash, a trailer for Guardians of the Galaxy, two new posters for Captain America: The Winter Soldier, a new trailer for The Amazing Spider-Man 2, and several hundred Empire Magazine covers dedicated to the X-Men and anybody remotely related to them. Oh, and Jennifer Garner says her husband looks really nice as Batman, so we can all start relaxing about that new Batman vs. Superman movie now. To say that this generation is slightly bogged down with comic book-inspired entertainment is somewhat of an understatement. But putting all of those other terribly interesting stories aside, I’d like to bring the focus back around to “Gotham” because I think there is real potential there if the makers handle it with care.

For those of you not familiar, “Gotham” will tell the story of a young Jim Gordon battling the likes of Oswald Cobblepot, Edward Nygma, and Will Smith’s wife in the days before Batman’s arrival. Ben McKenzie, star of "The OC" and "Southland", will star as a Jim Gordon alongside such talented folks as Sara Paxton, Donal Logue, Sean Pertwee, and the afore-alluded Jada Pinkett Smith. Now, superhero television shows can be touch-and-go at best, so it is easily understandable that some folks are casting weary glances at a series containing 99% less Batman than most of the other previous shows that have dealt with the world of The Dark Knight. So, to the showrunners of “Gotham”, I beg your indulgence for just a moment.

You’ve already told us that Batman will not appear in this series. That is all well and good, but please don’t continually tease the audience with something that they’re never going to see. What do I mean by that? Well, you had us with the words “young Bruce Wayne” and “young Jim Gordon”. We know Batman ain’t popping up anytime soon, so please do not go winking at the audience every chance you get. Let me break it down a little easier for you: I’ll pretend to be you, the people in charge of “Gotham”, and I’ll ask questions. I will then switch back to being the lovable author of this article and answer those questions.

Q: Are we allowed to show a young Bruce Wayne stare solemnly into the distance while a bat flutters by in the background?

A: Yes. But only once, so use that moment wisely.

Q: Are we allowed to have Bruce see a cool-looking black car and mention to Alfred or someone else that one day he wants a car like that?

A: No. We already know Bruce is going to get a Batmobile one of these days, and unless you’re going to actually let us see it in this show, then please don’t waste time on this. Remember, this is your vision that we are interested in. Don’t make us think about other versions of this world without fully exploring your own first.

Q: How many cat references are we allowed to use around Selina Kyle?

A: One per Season. I think that’s being more than fair. You can double that amount if you actually plan to have her suit up as Catwoman at some point.

Q: Can we introduce The Joker?

A: No. The Joker is not that interesting without Batman. Even The Joker knows this.

Q: So, should we just concentrate on growing and developing our own versions of these iconic characters and not waste time pandering to the audience about something they already know about?

Basically, what I am trying to say is that the showrunners should have faith in their material. They have a solid foundation on which to build upon, as the world of Batman is a dark, exciting, sad, horrific, funny, serious, and nostalgic place all in one. The possibilities for this show are very exciting, but if all they do is spend their time teasing something that will never appear onscreen, then they’re going to have a bit of a problem on their hands. You have some very interesting characters lined up for this show. Take us on a ride with them, and only them. The target audience for this show is not stupid and does not need constant reminding that this is the eventual world of Batman and other famous DC characters. We want to see what “Gotham” has to offer, but we don’t want to be punished with constant pandering while we do so. So, to the show’s creators and to the Fox executives, I bid thee go out into the world and do great things!