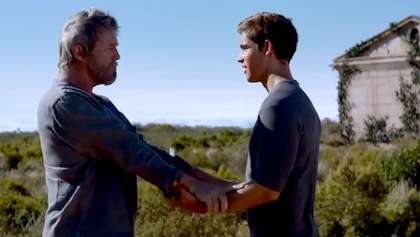 If you read The Giver by Lois Lowry while you were in high school, then you should be pretty excited about the upcoming movie adaptation. Whether you liked the book or not, you should still see the film because… well… Jeff Bridges is “The Giver” and Meryl Streep is “Chief Elder”. Nuff said?

For those of you who haven’t read the book, let me give you a quick rundown:

Following the popular trend of utopian/dystopian stories, the setting of the story is what seems to be a perfect society where no one gets sick or questions the world they live in and the rules they have to follow. The main character, Jonas (played in the film by Brendan Thwaites), is sixteen and naturally more curious than his peers. Later, he meets “The Giver”, a wise man who keeps the memories of the world before the current time. Jonas is given these memories and returns to his life with even more questions and curiosity than before. The “Chief Elder", though, is threatened by Jonas’s rebellious leanings, and we all know what Meryl Streep is capable of... In the film, the differences between the "old world" and the current one are depicted through color -- the current, "perfect" world is in black and white whereas the memories The Giver bestows on Jonas are in color, and this allows him to see things in color now too. It's sort of like a Divergent meets Pleasantville.

Check out the trailer here!

The film also stars Katie Holmes, Alexander Skarsgard, and Taylor Swift. If you haven’t read the book, then you better add it to the top of your Summer reading list, because The Giver comes out on August 15!

For more information about the movie and plenty of extras, check out the official movie website.

There is also The Giver Challenge! This is a 16-week challenge where fans can make profiles, earn points, and win prizes! Check out how you can win and be a part of “The Community” here.

Don’t forget to see The Giver when it hits theaters in August!