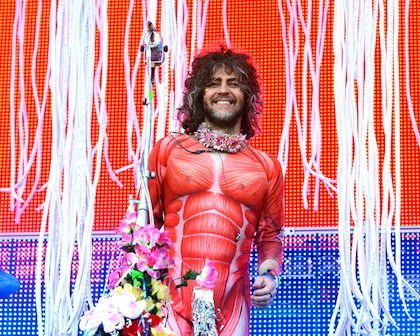 After this whole summer with rumors and details of The Flaming Lips's recreation of the classic Beatlesalbum Sgt. Pepper’s Lonely Hearts Club Band, the band has finally given us a release date of October 28 and a music video for “Lucy in the Sky with Diamonds”. The title of the recreation album will be With a Little Help From My Fwends, an obvious nod to the famous Beatles song from Sgt. Pepper (and “The Wonder Years” theme song) entitled “With a Little Help From My Friends”.

If you're asking yourself why The Flaming Lips chose that song as the title, well, on top of notifying the public of the release date and a music video, the band has also released a track listing detailing all the other artists the band is actually friends and have collaborated with for the album. The full track listing can be found below:

2. "With A Little Help From My Friends" – The Flaming Lips, Black Pus, and The Autumn Defense

3. "Lucy In The Sky With Diamonds" – The Flaming Lips, Miley Cyrus, and Moby

7. "Being For The Benefit Of Mr. Kite" – The Flaming Lips, MJ Keenan, Puscifer, andSunbears

8. "Within You Without You" – Birdflower, The Flaming Lips, and Morgan Delt

As you can see, a lot of people contributed to this album, including My Morning Jacket, Moby, Phantogram, Tegan and Sara, and even Miley Cyrus. In fact, Miley is prominently featured in the music video for “Lucy in the Sky with Diamonds”, as she is the lead vocalist. Check out the video below (but a word of warning: there are some extreme “F-bomb” drops in the beginning):

Wow! That was some whacky stuff! Feels like the psychedelic '60s have come right back and mingled with the 2010s in an insane blast of colors and sounds. While the lyrics are the same and it goes with the same melody, we can tell that The Flaming Lips are indeed doing something different with their recreation. I have a feeling that, this being the first song to be released, it means that it could be the most tame of the album. I personally am expecting that the rest of the album will be even more whacked out and awesome!

To make this album even better is the fact that none of the artists working on it will actually get paid from its success. All proceeds will be going to the Oklahoma City-based pet charity called The Bella Foundation, which helps low-income, elderly, and terminally ill pet owners pay the fees of veterinary care.

I don’t know about you, but from the insane music video, the musicians involved, and the fact the albums revenue will help a good cause, With a Little Help From My Fwends is sounding pretty magical and majestic to me. How about you? Are you excited to hear The Flaming Lips and their fwends?