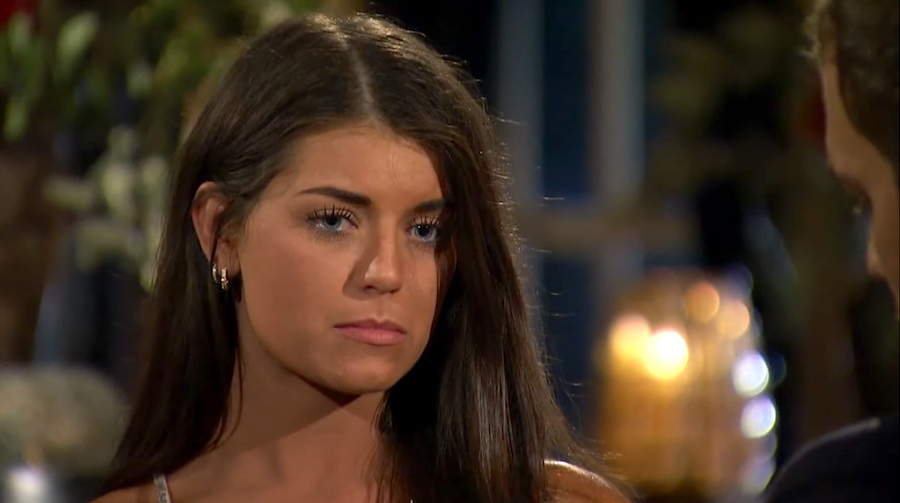 Wow, talk about an intense and equally frustrating episode of "The Bachelor"…

In last night’s episode (#9), Peter and the girls (Madison, Hannah Ann, andVictoria F.) are in Australia, and things heat up because it’s Fantasy Suite Week!

I’m a big believer in this week each season, because it’s so important to solidify these relationships. Not even for them to sleep together necessarily, but to have an all-private night with each other – no cameras, no other contestants, just the two people in the room.

If you’ve been watching the show, you know Madison is waiting until marriage to have a physical relationship with someone, and Peter has no idea. The night definitely focuses around these two, but there are a few other stand-out moments from the episode that I’ve laid out below!

*See Moment 3, The Most Emotional Moment*

There isn’t a clip for this (wtf, Bachelor Nation?!) but Madison walks away from Peter after he asks her to stay and fight for their connection.

Of course, the episode ends without us knowing what’s going on, BUT they did give us a preview of the next episode where she’s nowhere to be found… but then we see Peter’s mom pleading with him to go get someone and it’s probably Madison.

What do you think?!

I understand relationships are absolutely not perfect and there will be bumps in the road, but she and Peter still cannot get their communication under control.

Victoria F. attempts to open up about why she’s so quick to run when things get tough, but then, like we’ve seen many times before, she shuts down, gets defensive, and her insecurities show through.

Her insecurities about not feeling good enough aren’t even the issue – we’ve all been there. But her constant “I don’t know what you want” attitude frustrates Peter, and America is left wondering why she’s still there. BUT THEN, he tells her how much he loves his time with her and we’re all like ???

Okay let me set this up for you.

Let me start off by saying, I love Madison.

Emotional Moment, Part 1: At the end of the last episode, we see Madison ask Peter to talk before they set off to Australia. She tells him that she won’t move forward with him if he sleeps with other girls during Fantasy Suite Week. She DOESN’T tell him why she feels this way, and in my opinion, it was the perfect time to do so.

Emotional Moment, Part 2: Madison FINALLY gives Peter the full reason why she doesn’t want him spending the night with the other girls. Peter admits to doing it.

I’m torn with this whole thing because: (a) I feel like Madison was not clear at all to Peter about waiting until marriage (until this moment) and she waited so long to open about it. I mean, it’s her and two girls left. I personally feel like she should have talked about this sooner. HOWEVER, I can see why she didn’t open up about this earlier on because she didn’t know she’d make it so far, and maybe she wanted to keep it to herself until absolutely necessary. And (b) I don’t feel it’s fair for Madison to give him the ultimatum that she did (she claims it wasn’t her intention but it’s what happened) so late in the game, because Peter is right – he has two other relationships outside of Madison, and he should explore that in the ways he wants to. He’s looking for his wife, and I don’t think it’s right for him to feel guilty for doing somethings(s) he wanted to do.

When you watch the clip below, you’ll see comments that viewers think Peter doesn’t care about Madison, but I disagree. People can’t be giving people ultimatums left and right and expect them to always be followed. It’s not always fair, and this is the perfect example of that. Again, I love Madison!!! But Peter is free to do what he wants, and that shouldn’t mean he doesn’t care.

I’m giving her this moment because it feels like the first time we see her try to open Peter up, and she tells him she’ll be there for him.

She gets a lot of flack for being too young for the show, but here I feel like she shows real maturity in being his rock! CUTE.

I can’t find a clip for this, but all you really need to know is that the funniest moment goes to "The Bachelor" producers for putting all three girls in the same room during Fantasy Suite Week. Talk about awkward and uncomfy.

When one girl comes home from her night with Peter, another one leaves for a date with him a few hours later. Wild.

What was your favorite moment of Episode 9?!