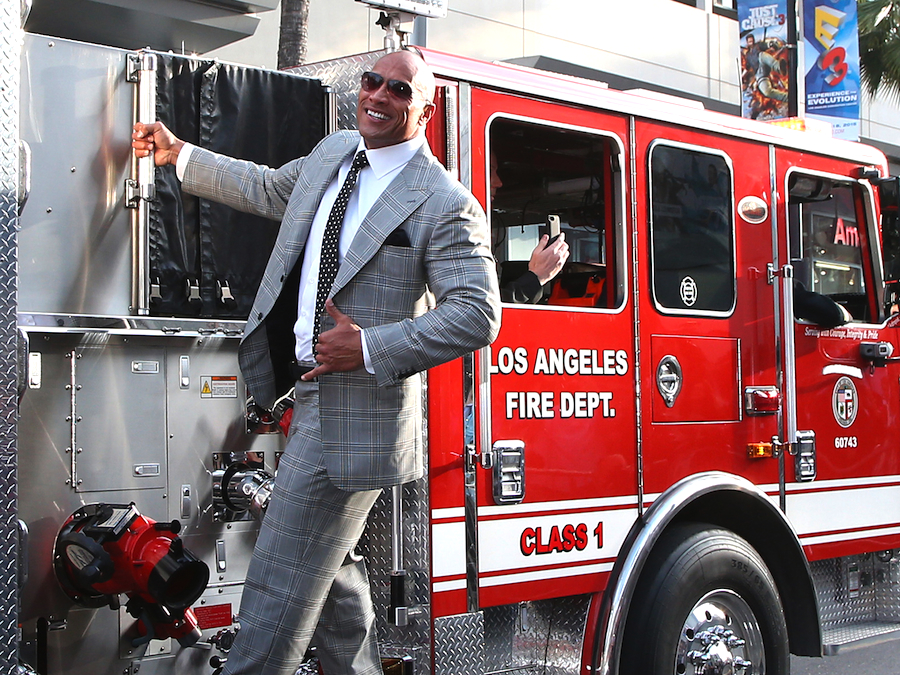 The legend of a man who stands amongst us mere mortals as... also a mortal has decided to bestow upon us his secret to success. If you haven’t figured out whom I’m talking about, it’s Dwayne “The Rock” Johnson, of course, and I’m talking about his new alarm clock app called The Rock Clock. The Rock says he attributes his recent boom of success in Hollywood on waking up consistently between 4 AM and 5 AM, so he wants to help you reach your goals too with this secret that farmers have been living by for centuries.

This app consists of a goal-setting screen with a progress calendar, no snooze button (because you gotta wake up to accomplish your goal), a “Rock Time” setting that wakes you up at 5 AM when The Rock wakes up (I originally read it that links your phone up to The Rock’s, but more on that later), and finally, but most awesomely, is that The Rock has personally recorded and sung the alarms… check them out:

Why am I telling you about this besides the fact it’s hilarious? I decided to spend all of last week living like The Rock (which is exactly what I set my goal as) and wake up at “Rock Time” AKA 5 AM. Here is a brief rundown of my results.

To start, I already didn’t do this correctly. I followed the instructions that you need to run the app all night for it to work, and the screen showed a picture of a phone getting plugged into a charger, but I saw this as a suggestion. I didn’t realize that you needed to have your screen on the whole time for it to work, but hey, I learn from mistakes so you don’t have to. I still woke up pretty early because my girlfriend goes to work quite early and woke me up anyway. Found out The Rock leaves motivational messages that look like they were made in Microsoft PowerPoint.

I have to say this: The Rock might be on to something. I’m sure he gets up this early to work out, but I got a lot of writing done before I even ate breakfast. By the time I was done writing, I went to the grocery store to get things for breakfast and other meals. I realized too that I got to the grocery store before most of the general public did. In fact, a lot of the workers were still stocking shelves at a massive level, and I was pretty much done writing for the day. The rest of the day was spent cleaning my apartment and catching up on other projects. I should note that I recently wrapped on a TV show so a lot of things fell by the wayside during those long hours.

Tuesday – The Rock gets up at 5 AM. Kevin may have been up earlier but official time is 5:23 AM.

My girlfriend was supposed to wake up before 5 AM, so I let her use the charger; she ended up sleeping in because her alarm was way too low, so the time I could’ve used to open my phone was spent getting her out of bed. Essentially, I made a transformation into a personified “Rock Clock”. Quite a quick leap.

After getting my girlfriend’s (in the words of The Rock) candy @$$ out of bed and off to work, I got on track towards my new regiment of writing all morning, breakfast, catching up on household, chores and watched “Game of Thrones”, as I hadn’t seen any of the new season yet. Nothing really exciting happened, but the video The Rock put up this day got me more excited. He actually spoke to us and apparently took it while driving his pick-up truck. He also sang a cover of one of his own alarm hits, “Good Morning Sunshine”, and toss over the possibility of more original songs for the following generations of “The Rock Clock”.

This was just on me, guys. There may not be a snooze alarm, but you can still shut it off. On this day, and the following day, my girlfriend and I wanted to celebrate me wrapping up another project by hitting up Disneyland, so I can experience it for the first time ever. I hit the alarm off quick, fearing that I would wake her up too early and bother her as she doesn’t really get to sleep past 6 AM. Instead of getting up, however, I decided to cuddle for a bit and accidentally fell asleep, but my fail-safe alarm goes off and I wake up without disrupting my hibernating girlfriend.

The Rock’s video is as motivational as ever coming from the gym, telling us that we gotta get up because “greatness doesn’t chase itself.” I hit the showers and we got ready to head to Disneyland. Our car, powered with fuel and us running on coffee, we made it to Disneyland early and had a great day for my first visit, even if “Pirates of the Caribbean” is closed. (I will ask, is Splash Mountain supposed to be terrifying? Meaning, if you’re supposed to feel as the ride progresses that you are sucked into the cutest and most cuddly hell dimension before you’re plummeted to your possible death? … Seriously where are the seatbelts? Is this ride built as a reminder that you will die someday?)

Yup, I really dropped the ball on this one. The night went later than either my girlfriend or I suspected, and our feet were killing us! We had to rally because today we were trekking back to Disney to go to California Adventure (where you can drink alcohol!). We had another great day but felt way more wiped out than the day before. It’s tough to say if one park is better than the other, but The Cars ride is a lot of fun. I will say that Disneyland has a big Star Wars presence and I certainly wish it carried over to California Adventure.

The Rock left a fun message from the night before at 9 PM about how he is driving to set (I found out on Sunday that he was driving to the upcoming Baywatch movie set) to film until 7 AM. This brings up two things: (1) Unlike an initial news report I read on “The Rock Clock”, going “Rock Time” doesn’t link your phone up to The Rock’s. I deduced that it must be a time he chose to be the one he usually wakes up at, and (2) Fast 8 is currently filming, so is The Rock juggling both projects, or is his role in the now-dubbed Furious series becoming gradually smaller? Either way, this has nothing to do with my relation to his free motivational alarm clock app that he sings original songs and created his own alarms for.

Friday – Rock Clock Time (lies… we don’t know when The Rock really wakes up) 5 AM. Kevin wakes up at 5 AM… sort of.

I did it! I finally did it. I woke up on Rock Time! … Sort of… I won’t lie, I went back to sleep not long after. Even another homerun of a motivational video from The Rock himself couldn’t keep my eyelids from sliding down. I was just too tired from the previous two days of nonstop fun with my favorite person in the world (save your groans, I’m cheesy). I spend the day resting up, reading, catching up on more TV, and eventually writing.

My overall impression of this app is that it is a great idea. I will say to people interested in using it for the Rock Time feature to get to bed no later than 10:30 PM. You don’t always need 8 hours of sleep, but try not to waver from getting up around there. Whether you need to wake up for a rocking workout sesh, or just because you want to get non-physical goals done earlier, this app will help you out. It may be an idea that a lot of farmers and good garbage men have done forever, but The Rock is certainly on to something, and by making 5 AM Rock Time, you too will certainly want to tackle that challenge as well.