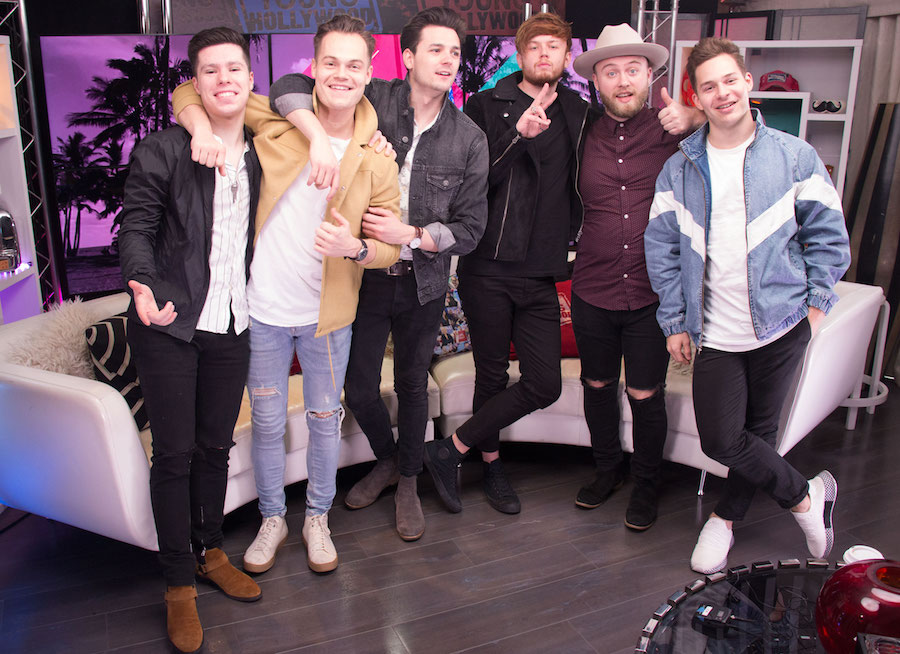 The Young Hollywood Studio was packed tight with talented cuteness when up-and-coming country group King Calaway stopped by! The brand new 6-member music group sat down and talked about everything from touring all the way to celebrity crushes with us.

When I say this band is brand new, I mean BRAND new! King Calaway came about in 2018 when Jordan Harvey, Chad Michael Jervis, Simon Dumas, Caleb Miller, Chris Deaton, and Austin Luther all joined together to create the harmonic and anthemic country music that their fans are going crazy over! But the recent forming of the band doesn’t mean these guys are strangers to the music industry. Individually, the boys all have music-heavy backgrounds and have accomplished a lot of big things with their powerful voices and instrumentals. Now, they are putting all of that talent together and giving us the next big thing! And they aren’t your typical "boy band" either. The King Calaway members are native to 3 different countries/regions that include the U.S., Scotland, and Gibraltar. That is 3 different cultures and 6 different experiences, coming together to make one amazing sounding band.

To kick off their career together as a group, King Calaway is currently on a radio tour, which they are so excited about. They even mentioned how special it is for them to hear their hit single "World For Two" being sung back to them by their fans. One of the most renowned venues they got to perform at was the Grand Ole Opry, where Caleb said he could hear his mom screaming from the audience… how cute! The band also discussed the not-so-glam parts of being on tour, like the bunk bed situation, but you can tell there is nothing but gratitude coming from these guys.

Of course, there is way more to the King Calaway members than just their music. First of all, when host Mary Kate Corsetti asked them who the best gamer was, they admitted it was a sensitive subject for them because they all happen to be obsessed with FIFA, especially Jordan, Austin, and Simon. A little friendly competition never hurts, but for Chris, he would rather just watch from the sidelines. As for celebrity crushes, well, all eyes were on Caleb when this subject came up. He casually admitted to having a crush on former Disney Channel star, Sabrina Carpenter. Lucky for him, one of his band-mates knows Sabrina, so who knows, maybe he can put in a good word for his friend. We are all rooting for you, Caleb!

So, what’s next for King Calaway? They told us they are aiming to get their music out to as many people as possible, and with that the boys have a lot of exciting things coming up. Having King Calaway in the YH Studio was so much fun, and we can’t wait to continue to  follow them on their journey to success!

Watch the full interview below!