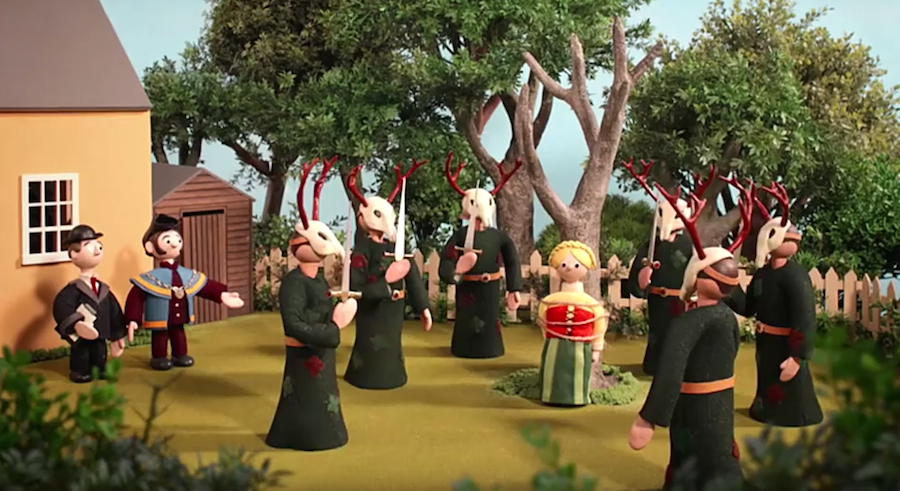 Whether you’re a fan of the band Radiohead or not, you have to admit that, as far as the fan consensus goes, they are the most consistently good band of all time. Outlasting The Beatles, who debatably never put out a bad album, Radiohead sits pretty supremely as always giving fans what they want with each album. These later years may even see them at the top of their game, thanks to their latest album, A Moon Shaped Pool.

Take a look at their music video for the track “Burn the Witch” below:

Something that smacks me in the face right off the bat in this video is The Wicker Man-esque plotline and imagery. It’s got everything from a stranger visiting a town with weird customs, pagan masks, communal work, rural setting, small wooden house, the fact the main character believes that somebody else is going to be executed (in this case, for being a witch) only to find out before it’s too late that it is him who is getting roasted, and it even occurs in a tall wooden effigy of a man that is set on fire. That is more or less the plot of the original The Wicker Man and also the amazingly, hilariously awful-but-totally-watchable Nicolas Cage remake (yes, that’s the version I own on DVD…).

So, obviously the original book’s author, the original director, or the original screenwriter is looking to sue Radiohead, right? Wrong. Did anything about the style seem familiar to you? If you said no, it’s okay, as I myself only faintly recognized it from my childhood, like the half-forgotten acid trip that this video feels like. It’s come to my attention that this is specific style of clay animation comes from a trio of British children’s shows done in this style dubbed the “Trumptonshire Trilogy”, created by Gordon Murray. Take a look for yourself:

It’s completely understandable that Murray’s estate would be upset over the violent and sacrificial depictions in their patriarch’s style, but I probably would’ve never seen or gotten the name of this style without it. I’m a huge fan of claymation, so this music video to me is amazing. It not only brings back an old animation technique and gives it a pretty perfect homage, but it spins it’s own dark aesthetic to this specific style that kind of feels a little spooky to begin with. It could just be my own experiences, or growing up really associating clay animation to Nightmare Before Christmas, but I doubt I’m alone in this feeling that something wicked looms in the brightly lit skies of Trumptonshire.

What also makes this music video quite enjoyable is that, amidst this beautiful and eerily trippy landscape, it has a clear plot... except I really can’t tell if the main character is a health inspector or what exactly he’s supposed to be doing. The story, coupled with the craft, gives me an off-edge kind of feeling where I know something creepy or possibly violent is going to happen but I never know when. In this I would even go as far as to say it accomplishes more uneasy feelings in such a short period of time than most full-length horror movies do today in their much more extensive runtimes. Here’s to hoping, no matter what happens with the pending copyright case, that it never gets taken down.

Speaking of half-forgotten acid trips, check out Radiohead’s other video for “Day Dreaming”. It’s a different kind of trippy music video that uses live-action to throw off your senses.