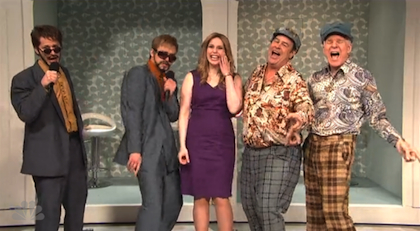 If you watched “Saturday Night Live” over the weekend – and we KNOW you did, because Justin Timberlake was the host and musical guest – then you’re probably well-aware that the show featured many callbacks and recurring characters/skits… Some of which you might not even realize were do-overs.

Oh, I’m sure you recognized the good ol’ “D**k In a Box” guys immediately, as well as the singing, be-costumed storefront shill (this time for Veganville). But for those of you ages 25 and under, a couple of other flashbacks might have gone over your heads. Allow me to help.

We’ll start with JT’s opening monolgue, which saw him become inducted into SNL’s exclusive Five-Timer’s Club, since this show was, you know, his 5th time hosting. But did you know that they did the same skit way back in 1990, when Tom Hanks made his own 5th appearance on the show? It’s true! And that one included Paul Simon and Steve Martin as well. Plus, it was probably the last time the “surprise” appearance of Elliott Gould elicited spontaneous applause (sorry, E). Check it out below (Coco Cameo Alert!):

Now, let’s take it way, waaaayyy back. During the “It’s a Date” sketch, the terminally adorable Vanessa Bayer was tasked with choosing between 3 bachelors – every guy Bobby Moynihan… the ever-so-smooth Motherlovers themselves (JT and Andy Samberg)… and then… Dan Aykroyd and Steve Martin dressed in really tacky clothing and talking in funny accents. Huh. Okay, I wouldn’t blame you if this one left you scratching your head, because the Festrunk Brothers are even before MY time! These recurring characters came about during SNL’s original run back in the late-‘70s. Basically, a couple of bros from (then) Czechoslovakia who come to America to score chicks… in the most crude, self-unaware ways possible. Their catchphrase was, of course, “We are two wild and crazy guys!” Plus cheeky references to “bulges” and “big American breasts” and other misused U.S. slang. Such charmers. But you gotta love 'em. Anyway, check out the video below to see Aykroyd and Martin in action back when it was in context (and the polyester pants fit better):

And now you’re all caught up! So, rewatch Saturday’s episode below with a new sense of understanding and some trivia to impress your friends with! (Or not.)