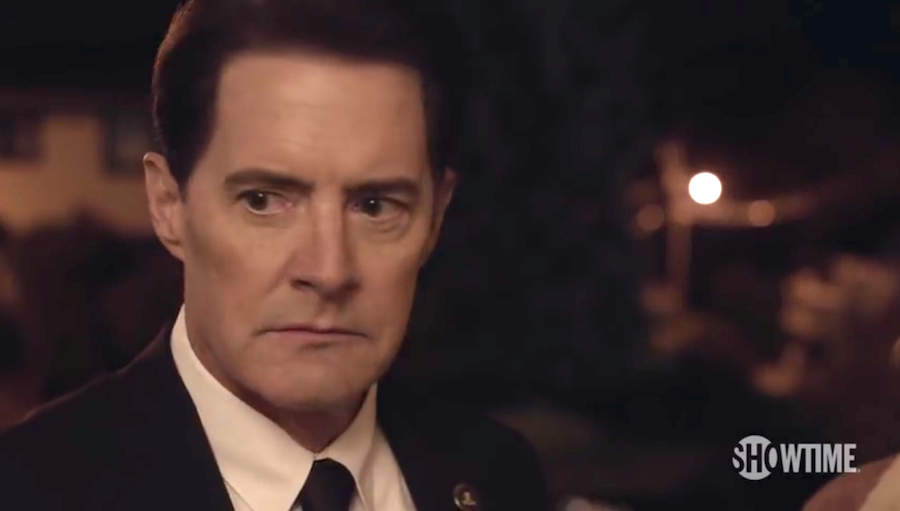 In 1990, a television mystery premiered that would change the world. “Twin Peaks”, created by Mark Frost and David Lynch, gripped audiences with its nail-biting mystery, quirky setting, and intriguing characters. Although the show would only last for two seasons, it gained a huge cult following and remains one of the most popular mystery series to this day. Now “it is happening once again…” as “Twin Peaks” returns for a limited series on Showtime. To help prepare you for its return, I made a handy list that introduces the world of “Twin Peaks”. For all you newbies out there, welcome! And let’s start with the basics…

In the fictional town of Twin Peaks, Washington, FBI agent Dale Cooper (Kyle MacLachlan) is enlisted to help solve the murder of homecoming queen Laura Palmer (Sheryl Lee). While the series follows the traditional beats of a crime drama, it is directed by Lynch -- so, needless to say, it’s weird. Expect supernatural elements, surreal shots, quirky humor, and a bit of horror. I won’t reveal what happened to Palmer (you’ll have to watch to find out!), but audiences dug the oddball mystery, making “Twin Peaks” a cult classic.

In 1992, a prequel film was made titled Twin Peaks: Fire Walk With Me. The film follows the investigation of the murder of Teresa Banks and the last seven days of Palmer’s life. Unfortunately, the film was not a hit -- audiences were disappointed that the movie lacked the same tone as the series. However, the new limited series has been fairly received.

The reboot of “Twin Peaks” premiered on May 21 (this past Sunday) on Showtime. It’s actually more of a continuation of the original, and takes place 25 years after the original events (that 25-year mark is important). Most the original cast returned for the continuation, as well as some newbies (it has been 25 years, after all, some things in the town are bound to change), and of course Lynch and Frost, who wrote all of the new episodes.

The original two seasons of “Twin Peaks” are available for streaming on Netflix, Hulu, and Amazon.

This is a series that you have to pay attention to, so it’s not one to put on in the background while you tidy up your house. Be sure to start with the pilot, and the third episode of Season 1 -- that’s when the plot thickens…

For the sake of spoilers (for all you newbies!), I won't reveal any crucial twists or turns:

- The original population of Twin Peaks was much smaller (only 5,000!). However, ABC executives were worried that that was a bit too small, so the town’s population grew to 51,201.

- The show was so popular (and gripping) that world leaders wanted to know spoilers! Producer Jules Haimovitz stated that President George H.W. Bush called him wanting to know who the killer was, per request of Russian leader Mikhail Gorbachev!

- The tantalizing theme song was created in just 20 minutes. David Lynch and composer Angelo Badalamenti wrote it on an electric keyboard.