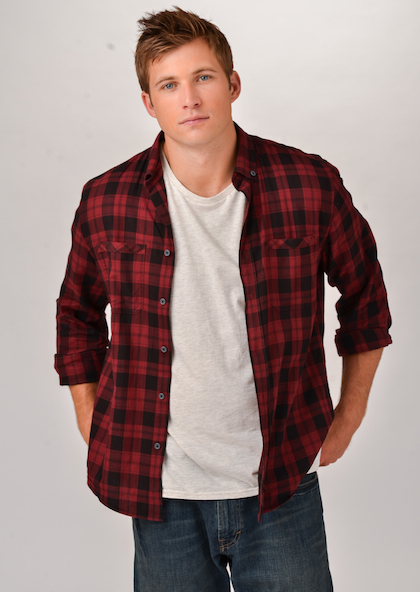 Justin Deeley stars in Huffington Pictures and Breaking Glass Pictures's upcoming flick Geography Club, which tells a tale of teenagers questioning their identities and end up forming a LGBT support group under the alias "Geography Club" in hopes they can be themselves around each other. Throughout the movie, the teens take us on their heartfelt journey to discover just who they really are. Geography Club will be in theatres and on VOD starting November 15.

Justin gave us some good advice and let us in on exactly what his perfect day off would be! Hint hint, ladies… it involves shirtless guys and the beach!

YH: Your new movie Geography Club comes out in theatres and Video on Demand in November; without giving away too much, can you tell us a little bit about the plot of the film?

JD: For those who have read the novel, they might be able to see some significant differences, things like: in the book, we play baseball, and in the movie, it’s football. But the plot and the message of the film is the same. Geography Club is an alias for a support group for gay and lesbian students in high school… that’s kind of what it all centers around. You know throughout our we lives search for an idea of an identity of who we’re supposed to be based on whatever’s out there. My character is a football superstar, and all he wants in the world is to be a football player and play in the NFL and go on to college and earn a scholarship, and his fears are, “What if I’m not accepted because I’m gay?” For my character, the journey is watching him go through that battle of that inner conscious of what his dreams are and what his heart tells him to do. The film is just about accepting who you are and knowing you’re not alone.

YH: Can you use three words to describe your character Kevin?

JD: He’s very shy, which, again, plays away from the stereotype of a superstar football player, because he’s holding on to this secret. He’s determined… to achieve his goals. He loves football, which is something I can definitely relate to, and nothing will stand in his way of reaching his goals. And he’s selfish.

YH: Tell me a little bit about what it was like working under Producer Michael Huffington, who’s a well known politician, filmmaker, and who’s played a large role in supporting the LBGT community.

JD: He was there for just support, he was somebody who wasn’t trying to have his opinion. A lot of times, in similar situations, people will say "I want to do it this way" and get very arrogant, but he was very humble about the whole thing, and he just let the creative people do their thing. For the actors, directors, writers, EPs… he made it feel like a very comfortable environment, especially given a lot of the scenes are very sensitive. He was just there; you never even knew he was there most of the time, and he respected the actor and gave them the space that they needed. He’s a good man, he knows what he wants out of these films, he knows he wants to make a difference, whether it’s to one person or 50,000 people, it doesn’t matter to him… he’s in the business of making important films. And I know his track record; he’s done it all, and he was just a good person to have on set.

YH: Since October is Anti-Bullying Awareness Month, and the movie centers around a group of students who have been bullied and are ashamed to reveal their true selves to their peers, if you could give any piece of advice to anyone today that may be in this same situation, what would you say to them?

JD: I remember there was some bullying that went on a little bit [at my high school], but nothing physical, because our school was very disciplined, and you could be expelled for something like that. It was a very private school, very strict, that sort of thing. But I do remember that there were some kids, it was very apparent they were struggling with fitting in in high school and feeling like they didn’t belong. And I’ll say this, I admired them greatly, because they found out what they loved and they weren’t apologetic about it. My advice would be this: Don’t be apologetic about who you are. And, again, I’m 27, and it’s easy for me to say that now, and also I wasn’t the kid that was bullied. I was an athlete and I was a good one, but there’s something very powerful, very strong, and very brave about that person. Those are the bravest and strongest kids in high school, those are the toughest kids... not the ones who play sports and do it all. When you’re the big football superstar, that’s not a tough high school experience. A tough high school experience is the kids that don’t apologize for who they are, they go to school everyday and they are who they are and they accept that. And I find that to be very admirable. I think the world of people like that. The truth is, you’re not alone in the world, you’re not the only one who’s going through that if you can just have that attitude and know that it gets better. I would say, you are who you are and be proud of who you are.

YH: What kind of message do you hope that Geography Club gets across to its viewers? What kind of impact are you hoping to make?

JD: As far as impact, if it influences one person, I think it was worth doing the movie. It’s beyond my control of who it’s going to touch. There are people who are going to gawk at it and make jokes about it, and they are people who are going to find it wonderful… If it can just help one person, great! We all wear masks, especially in high school, and it’s a tough time in our lives, especially if you are going through this identity crisis. So, I think the message of the film is, you’re not alone in the world, you’re just not alone. No matter what you think or how you feel, just be honest about who you are and you’ll be surprised on who will stand beside you.

YH: In the movie, you play a ladies man/jock; when you were in high school, did you fall under a certain group yourself? And speaking of Geography Club, were you involved in any clubs or sports?

JD: I wanted to play in the NFL. That was the goal of mine, and football is a year-round sport. I was in high school from 2000-2004, and that was the beginning of the one-sport athlete. I was in student council, and all my friends were on student council just because it was fun to do. We had tons of clubs, and I had friends that were in Chess Club and stuff like that. I do know that there wasn’t a Gay Straight Alliance Club that I knew of. Football was kind of my family, and I had a wonderful experience with it. I wanted to do theatre, but I was terribly shy at doing theatre. I couldn’t sing, so the musical was out, and I just thought football was going to be my main focus, and acting was just sort of like a hobby. I think football was my club. 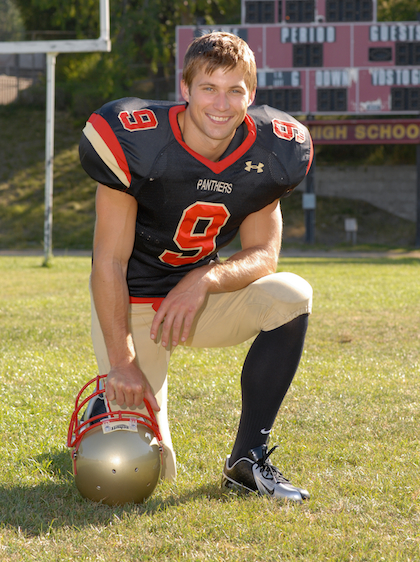 YH: When did you realize you wanted to pursue acting instead of football?

JD: In a nutshell version, it’s a long story why I stopped playing football, but it just didn’t work out for me, and I think everything happens for a reason. Had I gone to a different school, it would have probably been a different story, but I stayed home and played football at the University of Louisville, and it just wasn’t what I wanted out of my life anymore. And I got so much flack for stopping playing football that I wanted to give this dream of becoming an actor a fair shot. My dad was the big supporter of that. If it wasn’t for his encouragement, I would have never even stopped playing football, I would have just gone on with my life.

YH: When you’re not busy working, what do you like to do with your time off? Describe your perfect day off.

JD: My perfect day would be the Fourth of July. I’ve got nothing to do and it’s a beautiful day out. I’ve got some friends from back in Kentucky that came to visit me, I’ve got my friends here in L.A., and we go down to the beach early in the morning, play beach volleyball, and drink some beers. That’s what it’s all about, when you do find those people in your life that are great to hang around, especially when they come back to visit you from Kentucky, those childhood friends of yours, it’s just the relationship that you have with people. I think that’s what life’s all about. Whatever you’re doing doesn’t matter as long as you’re with the people you want to be with. I don’t need a bar -- give me some beach, some beers, and some beach volleyball, and let’s rock and roll… Oh, and at night, throw a bonfire on there and we’d bring our guitars.

JD: A guitar, a fishing pole, and a notebook/pencil.