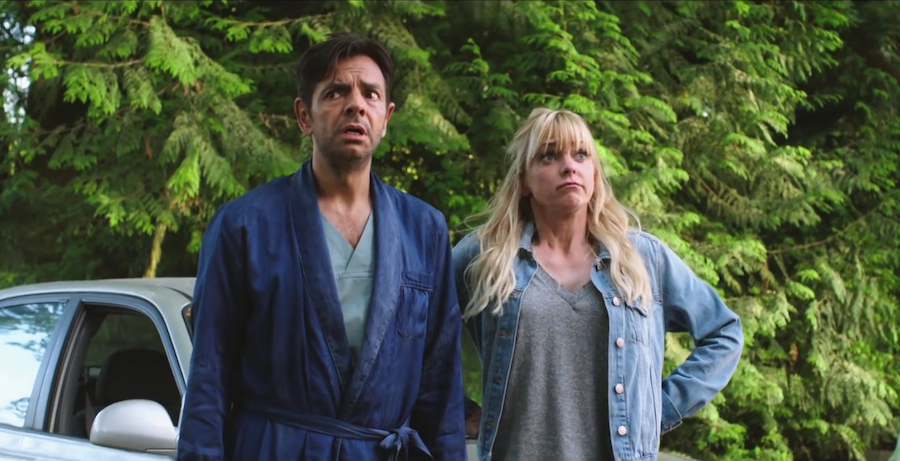 Opening up to a solid $15 million at the box office this past weekend, romantic comedy Overboard, starring Anna Faris and Eugenio Derbez, is a solid look into the necessity of Latin American narratives in cinema.

Inspired by the late-‘80s Kurt Russell and Goldie Hawn comedy of the same name, the film depicts Derbez’s character, Leonardo, as a wealthy man who is far removed from all working class constructs. Living in total luxury thanks to the family business, Leonardo offers no sympathy to anyone that cannot uphold his lifestyle. Upon falling off his boat during a drunken escapade, he wakes up on the shores of a small Oregon town, only to realize that he has amnesia and cannot even remember his name. When Faris’s character, Kate, learns that the man who had previously humiliated her during a shift for a cleaning company has amnesia, her friend Theresa (Eva Longoria) devises a plan to set Kate up as Leonardo’s wife. Taking advantage of his memory loss and the hospital’s inability to identify him, Kate brings him home to play a father role to her three daughters as she prepares to study for the board exam to become a nurse. Although off to a rocky start, Leo begins working hard at his construction job and fatherhood, only to find the beauty in building other forms of wealth.

While the trailer appears to offer yet another fun, feel good movie for families, there is more to Overboard than it seems. Dynamic character development, genuine progression, and the reality of being Latinx in America come together to offer a film that actually speaks to an underrepresented community. Los Angeles is known as the entertainment capital of the world, yet its largest demographic remains hidden. In a city that is nearly 50% Latinx, it’s shocking that there’s such disconnect in speaking to those audiences.

Overboard doesn’t necessarily have all of the makings for box office success—it’s a remake that has come out just one week after record-breaking Avengers: Infinity War, and its stars, although amazing, aren’t huge (despite Derbez being a significant influence in the Spanish-speaking community). Critic reviews haven’t been the best, but they’re missing the biggest part of the film’s success: it is inclusive. Overboard starts off Leonardo as a billionaire, a role that isn’t commonly seen for Latinx characters. It then transforms him into an honest, working class father who spends his days laboring away at luxuries for the wealthy, and nights cooking and cleaning for his family while finding peace in the simplicities of life. Although the film never makes the lifestyle appear glamorous, it shows the appreciation that can come from tough times.

When Leo is still new to the world of hard labor and the never-ending tasks of a parent, his co-worker gives him a genuine pep talk. It might be film dialogue, but it hits hard when the man tells him to be thankful that he has a decent job and a beautiful family. It isn’t the best life, but it’s his life, and he has to keep pushing if he wants the next generation to succeed. It is the narrative of so many working class families, immigrants, and especially Latin Americans in the U.S. Looking into the homes of the richest 1% while going home to prepare minimal dinners is rough, but people go through it every day. Despite the realities, the film is never heavy or forceful in its perspective—it remains consistently funny and well developed. The film is offering Spanish screenings along with the English ones, which opens it up to its targeted demographic even more. It is lovely and refreshing to see cinema shifting to consider audiences of varying ethnicities. Last year’s overwhelming successes with Coco, and this year’s Black Panther, show the dire need for diversity in the entertainment industry.

Regardless of your background, Overboard is an endearing film with necessary themes that anyone can find enjoyment in.