Not Your Average Run in the Park: 8 Wild & Wacky Marathons to Get You In Shape! 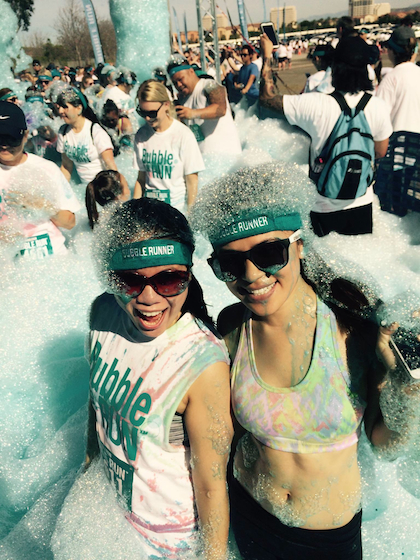 How many of you have running a marathon on your bucket list? I definitely do, but I am no way near in shape for that yet. One way to start training is to sign up for a couple of 5ks, which is a little more than three miles. There are so many 5ks out there, though, so why sign up for just the regular ones when there are various races that are more than just running? Ever heard of the Color Run or the Mud Run? Those are just a couple of the 5k races out there!

The whole country is looking for new ways to get fit and have fun. These races are a great to stay in shape as well as have a good time. Bring your family, your friends, your co-workers, or your club/organization and have a blast!

Here are a few of the wackiest and craziest races that you can sign up for:

At this race, you run a normal 5k, and at every mile marker, people throw colored dust at you. Sounds unpleasant but it’s actually a lot of fun!

"A Good Clean Run" is their slogan, and I couldn’t agree more. It’s like one big bubble bath, or a car wash without the cars.

This is the EDC of races. Flashy costumes, neon, music, glow sticks, bright lights accompany you while you take on a 5K. And when it’s all over, everyone gets to party at a huge concert with live DJs.

Have you ever seen the show "Wipeout"? Well, here’s your chance to feel what its like to be on the show! It is filled with “game show-inspired obstacles needed for one of the craziest runs you’ll ever do." Some of the obstacles include the Sweeper, the Wrecking Ball, Big Balls, and many more!

If you are a huge Disney fan, than this was made for you. Orlando's Disney World puts on a variety of races, from a 5K to a 10K, a half marathon, a kids run, and even a full marathon. They also have a Goofy and Dopey Run, the latter of which is 48.6 miles! Whaaaat?! All the races take you through the Disney Park and it’s a huge Disney running party!

This is one of the most intense and grueling obstacle races out there. This race was designed by “insane ultra athletes and a Royal marine.” This race runs worldwide as far as Mexico and Australia and hopefully more! This race just looks kind of painful, but if it's for bragging rights, then I’ll try it out!

Much like the Spartan Race, this is an athlete’s test of endurance, skill, and mental grit. It’s more of a challenge than it is a race.

Run For Your Lives

If you need a little extra motivation to keep movies, how about being chased by zombies? Can you survive? And there’s a killer after party. Pun intended. There are only a few dates for this run so hurry and check it out!