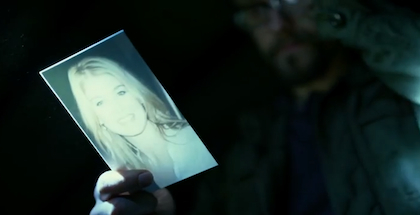 Dim lighting, low angles, plenty of tracking shots, and the drama! You know what that means -- the full theatrical trailer for the new David Fincher film, Gone Girl! This trailer gives us a more in-depth look at the mystery film starring Ben Affleck and Rosamund Pike. For those of you who do not know what the film, loosely based on the novel of the same by Gillian Flynn, is about, here's a quick rundown:

Gone Girl follows Nick Dunne (Affleck), whose wife, Amy Dunne (Pike), has gone missing. As it tends to happen in real life, Amy’s disappearance stirs a media frenzy, putting Nick in the hot seat. As the press and the general public explore more of Nick’s behavior, rumors circulate that Nick most likely murdered his own wife. The biggest reveal we get in this in the trailer is showing Nick smiling next to a picture of his missing wife during a media event. We then cut to a woman (who can I only assume is a producer of some sort) who is shown disgusted by Nick’s smile. As we see this, a voice says, “The hallmark of a sociopath is a lack of empathy.”

This puts me in mind of the Laci Peterson case that took place about ten years ago, which started a full-fledged media circus to find the missing pregnant wife. Just like Affleck’s Nick Dunne, Laci’s husband Scott Peterson was at the forefront of the search party. In the end, Scott Peterson was convicted of Laci's death. Could Affleck's character suffer a similar fate, or is the trailer trying to divert us?

Something interesting about the trailer is that it features so many other great stars like Neil Patrick Harris (whom the trailer reveals may have been stalking Amy in the past) andCasey Wilson. I personally would never expect to see any of these performers in a Fincher film. Tyler Perry also makes an appearance in what seems like a pretty big supporting role. Perry, like NPH and Wilson, is more well known for comedy, though he has dabbled in some more dramatic work as an actor in films like Good Deeds and Alex Cross.

The teaser trailer made it seem like the film will mainly follow Affleck’s Nick Dunne, but this new one features occasional voiceovers from Pike’s Amy Dunne. Could it be that the film will jump back and forth through time? I honestly don’t know, but I do know I will be there opening day!

How about you, do you think Gone Girl will be great? Check out the trailer below and let us know your thoughts!