Neighborhood to Get Strange Again: 'Ghostbusters' Returning to Theatres! 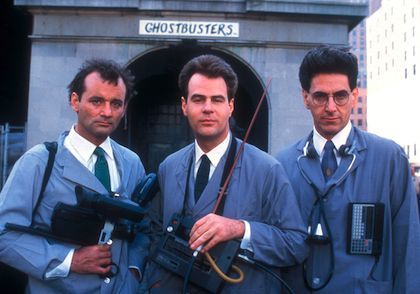 Q: Who you gonna call?

A: Your local Fandango for tickets to the 30th anniversary screening ofGhostbusters, that’s who.

It’s hard to wrap my head around the fact that Ghostbusters is 3 decades old, but come this weekend, it will be something I’m just going to have to deal with. And thanks to Sony Pictures, you and I both can relive our childhoods when they re-release the landmark film in over 700 theatres nationwide starting August 29 to celebrate this impressive milestone.

I honestly can’t remember if I saw Ghostbusters in the theatre when it was first released (though I do remember dancing to Ray Parker Jr’s theme song in ballet class), so this would be a new AND nostalgic experience for me! And it would be for most of you reading this too, as I’m willing to bet a majority of you were not yet born when the film came out, though you have undoubtedly seen it, or, at the very least, have heard of it.

Ghostbusters holds up remarkably well all these years later. Yes, some of the special effects are pretty dated but still decent and easily forgiven thanks to the superb writing, directing, and performances of all involved. Up until that movie came out, horror/sci-fi fell into two categories only: starkly serious and epic, or ridiculously cheesy and campy. No one had thought to do a COMEDY horror/sci-fi film before (except perhaps Young Frankenstein, but that was a spoof on existing material and doesn’t really apply here), and the reason Ghostbustersworks so well is that it still feels authentic. It’s a comedy, yes, but it’s not a send-up and it’s not a satire. There is a real, true sense of DANGER from the events of the story, but it never squelches the actors’ ability to show off the comedic chops that they’re known for.

Incidentally, with Ghostbusters turning 30, that means that its little brother, the sequel Ghostbusters II, will be turning 25, and even though the latter won’t be getting the big screen treatment like its elder, both films will enjoy a shiny new Blu-ray set, with the sequel boasting never-before-seen deleted scenes and commentary from Dan Aykroyd and directorIvan Reitman. Happy birthday, indeed! The Blu-ray set will hit stores on September 16.

So grab your proton packs, kiss your mood slime goodnight, and head to the theatre next month to enjoy Peter, Ray, Egon, and Winston all over again! JUST DON’T CROSS THE STREAMS!