Movies That Pair Perfectly With Songs From Taylor Swift's 'Folklore'! 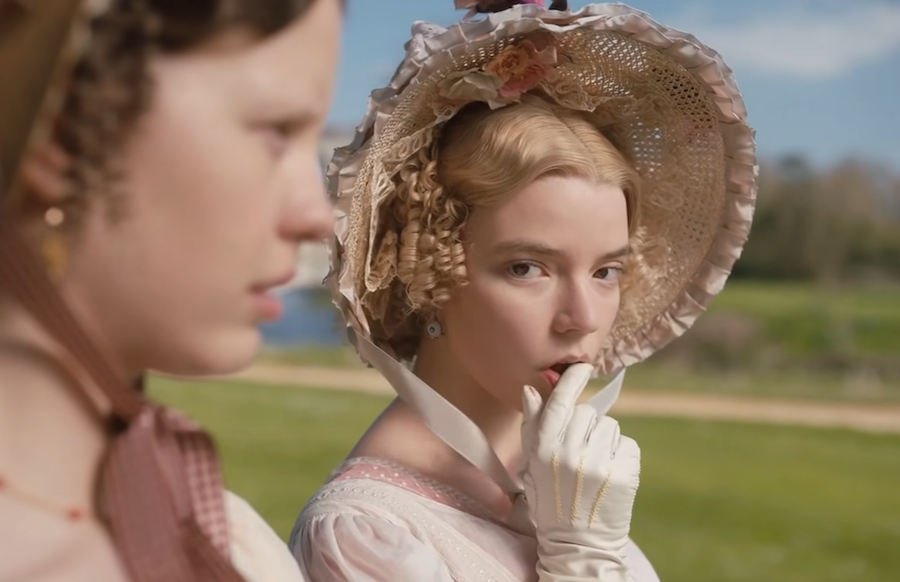 We can’t thank Taylor Swift enough for her mystical surprise album Folklore and for inviting us to get lost in the folklorian woods! Swift’s poetic lyricism and vivid storytelling in Folklore make you feel like listening to an actual book of tales — the energy surrounding the album is so strong that it made us wear cardigans in the midst of Summer! From the first moment I listened to the album, I couldn't help but think that every single track could be adapted into a movie, thanks to Swift's ability to paint the perfect picture with her lyrics.

If you are looking for some cinematic pairings for your favorite Folklore tales, here are some movie recommendations for each track on Folklore!

In "the 1", Swift tells the story of the one that got away and what would happen if they didn't get away? Swift explains the track is almost like "updating a former lover on what your life is like now."

Sample Lyrics: "But we were something don't you think so? / Roaring twenties, tossing pennies in the pool / And if my wishes came true, it would've been you..."

In Comet, Dell (Justin Long) and Kimberly (Emmy Rossum) meet during a meteor shower and believe it was fate that brought them together. "I don't belong in a world where we don't end up together," says Dell, and, sadly, the soulmates go through a rocky patch and are left wondering: "if one thing had been different, would everything be different today?" (Comet is available on Prime Video.)

2. "cardigan" — Splendor in the Grass

"Cardigan" tells the tale of young Betty, who is going through heartbreak as part of her coming-of-age journey after her first love James betrays her with a summer fling.

The Old Hollywood classic Splendor in The Grass captures the intensity of young love and how it can leave a mark that will never fade away. Deanie (played by the legendary Natalie Wood) and Bud (Warren Beatty) are their small town’s it couple until Bud breaks Deanie’s heart. The story follows her struggle to move on from her first heartbreak, which continues to haunt her even after years. (Splendor in The Grass is available on Prime Video.)

This historical masterpiece tells the tale of Rebekah Harkness, a woman who used to live in Swift's infamous Holiday House in Rhode Island. The track is so vividly written that it is almost like listening to an audiobook about Harkness's glamorous but lonely life.

Sample Lyrics: "There goes the most shameless woman this town has ever seen / She had a marvelous time ruining everything..."

Sofia Coppola's Marie Antoinette shows the notorious Queen of France having the time of her life while throwing parties, eating good food, having affairs, going to the opera… She may not be part of an American dynasty, but she's gone down in history as the woman who "ruined everything" and had a "marvelous time" while doing so… (Marie Antoinette is available on HBO Max.)

"Exile" tells the story of a broken-up couple and the bitter feeling one gets after seeing an ex with someone new. ‘‘After the second, third, and hundredth chances,’’ it is too late to turn things around for this fictional couple. Swift and Justin Vernon’s duet sounds like a musical argument; Vernon is singing "You never gave a warning sign" to which Swift opposes with "I gave so many signs."

Sample Lyrics: "You're not my homeland anymore / So what am I defending now? / You were my town / Now I'm in exile seeing you out..."

"My tears ricochet" has a haunting melody and vulnerable lyrics as it narrates the emotional chaos one feels after getting betrayed by their most trusted one.

Sample Lyrics: "I didn't want to have to haunt you / But what a ghostly scene... You had to kill me / But it killed you just the same..."

The Netflix thriller Things Heard & Seen also has themes of "betrayal" and "haunting the past" from a woman's perspective. After moving to an old, mysterious house with her husband, Catherine (Amanda Seyfried) begins to sense a ghostly presence around the house and unravels some dark secrets. (Things Heard & Seen is available to stream on Netflix.)

"Mirrorball" is a track that many Folklore lovers resonated with because of how relatable and honest the lyrics are. The track is based on Swift feeling like a mirrorball that is broken into pieces, allowing it to shimmer beautifully and reflect its light on to the dance floor.

Sample Lyrics: "I've never been a natural / All I do is try, try, try / I'm still on that trapeze / I'm still trying everything / To keep you looking at me..."

The newest adaptation of Emma. is a beautifully nostalgic cinematic reflection of Swift's lyrics. The character of Emma (Anya Taylor-Joy) always tries to please the people around her as their perfect matchmaker. For others, she is a mirrorball that entertains them and brings them joy, but she forgets about her own happiness and desires in the process. (Emma. is available on HBO Max and Hulu)

"Seven" tells the fictional tale about the narrator's childhood friend who has an abusive household. The narrator wants to protect and help this friend escape the haunted house with a child-like naivety; "Pack your dolls and a sweater / We'll move to India forever..."

Sample Lyrics: "I've been meaning to tell you / I think your house is haunted / Your dad is always mad and that must be why / I think you should come live with me / And we can be pirates…"

In The Book of Henry, young Henry (Jaeden Martell) finds out that his new neighbor Christina (Maddie Ziegler) is being abused by her stepfather, so he writes down a detailed plan in his notebook to help save her from the toxic household. This emotional movie will definitely give you "seven" feels with a plot that strongly resembles Swift's thoughtful lyrics. (The Book of Henry is available on HBO Max and Hulu.)

"August" is probably one of the most heartbreaking songs written by Swift — it is also a musical serotonin. The girl in "august" is a part of the love triangle from the songs "betty" & "cardigan". This track reveals Augustine as the girl who had a Summer fling with James and her dealing with their summer affair slipping away.

Sample Lyrics: "And I can see us twisted in bedsheets / August sipped away like a bottle of wine / 'Cause you were never mine..."

In Call Me By Your Name, Oliver (Armie Hammer) and Elio (Timothée Chalamet) have a nostalgic but short-lived affair in an ethereal Summer house somewhere in Northern Italy. As the Summer comes to an end, so does their fling. (Call Me By Your Name is available on Hulu.)

Swift described the character she created for "this is me trying" as ‘‘a person who is really lost in life and then starts drinking and every second is trying not to.’’

Sample Lyrics: "And it's hard to be at a party / When I feel like an open wound ... They told me all of my cages were mental / So I got wasted like all my potential..."

In When a Man Loves a Woman, Alice Green (Meg Ryan), a wife and mother, has an alcohol addiction and has to deal with adjusting to sobriety, which leads to problems in her marriage as well; Alice tells her daughter, ‘‘I messed up, baby. But I'm fighting my way back.’’ (When a Man Loves a Woman is available on Prime Video.)

"Illicit affairs" is a brutally honest musical portrayal of how messy an intensely passionate affair can get, especially after the ''dwindling, mercurial high'' fades.

Sample Lyrics: "And that's the thing about illicit affairs / And clandestine meetings / And longing stares..."

In Martin Scorsese's adaptation of Edith Wharton's novel The Age of Innocence, Ellen (Michelle Pfeiffer) falls in love with her cousin May's husband, Newland Archer (Daniel Day-Lewis). The two begin a love affair that can be destructive for their social status and Archer's marriage to May (Winona Ryder). (The Age of Innocence is available on Pluto TV.)

Sample Lyrics: "Were there clues I didn't see? / And isn't it just so pretty to think / All along there was some invisible string / Tying you to me?"

Love, Rosie is a heartfelt rom-com that tells the story of two childhood best friends, Rosie (Lily Collins) and Alex (Sam Claflin), drifting apart after high school only to find their way back to each other years later — most likely with the guidance of an invisible string! (Love, Rosie is available to stream on Paramount+.)

Mad woman is both melodically and lyrically filled with female rage and thoughts of revenge. The track perfectly reflects Swift's rage in a moment when she was disrespected but was treated as if she was an overreacting "mad woman".

Sample Lyrics: "There's nothing like a mad woman / What a shame she went mad / No one likes a mad woman / You made her like that..."

The 1976 horror classic Carrie is the perfect cinematic "mad woman" experience. It follows the shy and outcast teenager Carrie (Sissy Spacek) getting bullied in high school until she finally snaps and seeks revenge on prom night. (Carrie is available on Hulu and Showtime.)

"Epiphany" is another track where Swift proves her storytelling skills with vivid imagery and historical references. The track was inspired by Swift's grandfather's time at the Battle of Guadalcanal and how it affected him.

Sample Lyrics: "Sir, I think he's bleeding out / And some things you just can't speak about / With you I serve, with you I fall down..."

"Betty" was written from the perspective of James (the boy who broke two hearts as we know from the tracks "august" and "cardigan") and he is apologizing to his high school sweetheart Betty for messing up. The small-town love triangle and the boy apologizing to the girl after messing things up is a tale as old as time and one that we love!

In the '80s rom-com Can't Buy Me Love, high school nerd Ronald (Patrick Dempsey) makes a deal with the school's most popular girl Cindy (Amanda Peterson) to be her boyfriend. Soon, the relationship takes a bad turn when newly popular Ronald breaks Cindy's heart and tries to get her back. (Can't Buy Me Love is available on Prime Video.)

In "peace", Swift writes about the fear of not thinking you will be good enough for the person that you love and you can never give them peace.

Sample Lyrics: "I never had the courage of my convictions, as long as danger is near / And it's just around the corner, darling / 'Cause it lives in me / No, I could never give you peace..."

In the 1999 teen classic Cruel Intentions, Annette (Reese Witherspoon) and Sebastian (Ryan Phillippe) are opposites-attract. Sebastian is a manipulative socialite who, at first, only wants to seduce the "good girl" Annette as part of a bet. But once he falls in love with her, he fears that he can never give her peace because of his past mistakes. (Cruel Intentions is available to stream on HBO Max and Hulu.)

"Hoax" is a track about a toxic relationship and one's insistence to find reasons to hold on to it, despite knowing that it is hurting and painful.

Sample Lyrics: "Stood on the cliffside / 'Screaming 'Give me a reason' / Your faithless love's the only hoax I believe in..."

In 500 Days of Summer, Tom (Joseph Gordon-Levitt) is a hopeless romantic who is stuck in his fantasized idea of a no longer happy relationship. Throughout the film, he finds excuses to hold on to his ex-girlfriend Summer (Zooey Deschanel) and only chooses to remember the happy moments of their relationship and disregards all the bad parts for his convenience. (500 Days of Summer is available to stream on Hulu.)