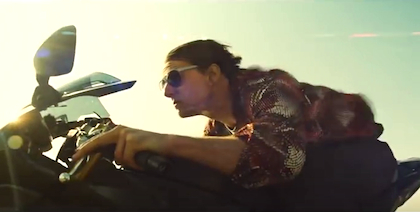 I can’t say that my interest wasn’t somewhat piqued when trailers for Mission: Impossible -- Rogue Nation started blooming faster than chicken pox on a herd of kindergarteners. After all, its predecessor Mission: Impossible -- Ghost Protocol was a huge success and a testament to what practical and cleverly crafted filmmaking could accomplish in terms of audience satisfaction that amounted to more than just the sum total of a contended 2 hours spent in a dark air-conditioned theatre with dozens of other strangers. And while that knowledge was kept in mind, your Uncle Greg still did not allow his feelings to approach anything that resembled enthusiasm because he was suffering from a broken heart. You see, I had a bad experience at the theaters that turned out to be a good experience for many, many other people for reasons that I still cannot explain properly.

The summer started out on a high note (Mad Max: Fury Road) that was said to have shattered the glass parts on the Mars Rover, and I skipped into the summer blockbuster season blindly optimistic that we would have a repeat of last summer, which I have constantly stated as being one of the best in terms of above-average spectacle in recent years. But I was kicked in the gut, and despite a strong showing from Pixar, I remained skeptical in regards to seeing anything else that could match last year's offerings, or, much less, Fury Road. But then Tom Cruise appeared magically on the back of a motorcycle, as he is wont to do, with Rebecca Ferguson and Simon Pegg in tow, and suddenly all was right with the world.

Yes indeed, Tom Cruise is back (did he ever really leave us?) and the 5th installment of his blockbuster franchise is in top form. It’s not everyday that a big Hollywood actor gets his own action franchise (it’s every other day, actually), and this one in particular has been kept in very good shape over the years. With Rogue Nation, we are seeing an interesting mix here, courtesy of director Christopher McQuarrie. Up until this movie, Ghost Protocol might’ve been seen as the most lighthearted film in the bunch, but Rogue Nation takes up that mantle, but does so in a way that does not diminish the stakes of the film or the adrenal pay-offs that come with the oh-so brilliant action scenes.

Ah yes, it was an absolute pleasure, bordering on an honor, to sit in that theater and watch the dances that McQuarrie laid out for us, and that truly is the best thing to liken them to. McQuarrie has a fine grasp on what makes these kinds of gripping action set pieces interesting, and they do not always hinge on explosions and flashy things. Everything that is happening within the frame is happening for a reason, and the meticulous planning is apparent without ever interfering with the flow and the energy. And thankfully, we are given the opportunity to take it all in rather than being robbed of the chance due to do shaky cameras and haphazard editing. I was having some real fun watching this movie, and not the type of fun that you sometimes have to convince yourself you’re having due to the obligatory “I’m just here to have fun” attitude that surrounds these types of flicks. A lot of what I am talking about takes place during a night at the opera, which turned out to be a much more exciting affair than the day at the races, which was featured in M:I2. In lesser film,s the the entirety of an action scene can sometimes be encapsulated in one still image, but it would be impossible to do this with the opera scene, which has a gaggle of moving parts to keep you glued to the edge of your seat. This opera scene is a great contribution to moviemaking and one that will be remembered for a long time to come.

While Cruise is the center of our little spy adventure, he has wisely allowed himself to once again be surrounded by supporting characters that make up the rest of the team. The idea of these films centering on a team died at the beginning of the first Mission: Impossible, stayed very dead in M:I2, and was finally resurrected to a successful degree with Ghost Protocol. These movies work best when Ethan Hunt has a crew of folks he can trust by his side. This not only allows for potentially delightful comic interplay between our band of spies, but it allows for later scenes filled with danger and death to have more weight because we have been given this crazy notion that Ethan might just give a damn if he lost someone, and vice-versa. I have love in my heart for the insane M:I2, but would anyone really have given a damn if the wacky Australian helicopter guy bit the dust? But more than all of that, we get to see the team react to Hunt’s insane philosophies when it comes to scaling tall buildings and other acts of aerial insanity. But such reactions are more than cute in this film, because while Ethan is taking it to the limit one more time, we are finally allowed to see the so-called “limit” actually have an effect on him. We’ve never really seen Ethan stumble (figuratively and mentally) in these films, but in Rogue Nation, we are, for the first time, allowed to doubt the capabilities of our leading man, and even he, for the very first time, shows hesitation in regards to his own abilities. And no, he is not pulling a Murtaugh from Lethal Weapon either. This was a welcome change and not only allowed for some excellent comic bits to take place but for us to actually be concerned for a man who has, up until now, proven to be almost super-human.

Mission: Impossible -- Rogue Nation has lifted my spirits, and seemingly the spirits of a nation, as it currently rests at the top of the Box Office in the #1 spot that it was destined to inhabit. But this is a film that deserves to be thought of as #1, and if Mr. Cruise wants to continue making these films (there’s a rumor that he’s already started planning the next one), well, that is fine by me, and I can’t wait to see what direction it heads in. At this point, I’m up for anything as long as this type of care and quality can be upheld.

Mission: Impossible -- Rogue Nation is now in theatres. Be sure to check out our chat with star Rebecca Ferguson in the YH Studio!