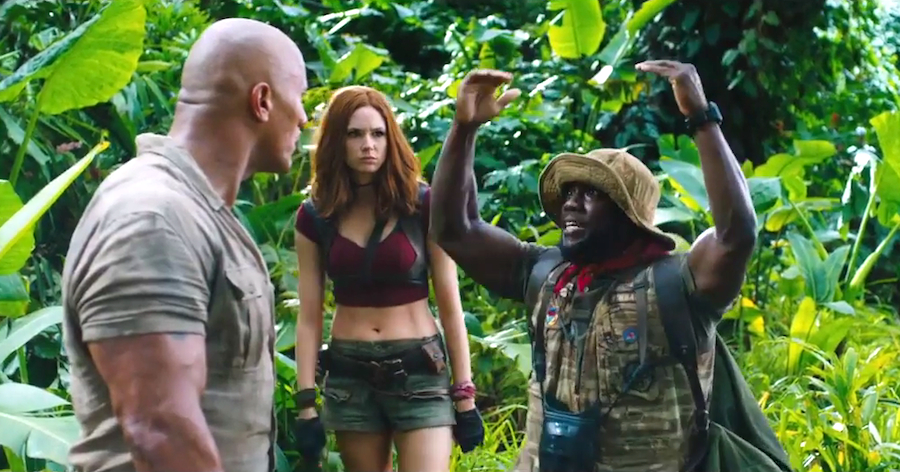 It feels like it’s been over a year since The Rock took to his SnapChat to post relentlessly about the filming of this movie, and introducing his fellow stars Kevin Hart, Karen Gillan, and Jack Black as they appeared to enter production. From the start of its announcement and who was involved, there’s been a lot of negativity swirling around Jumanji 2. Much of it being due to the fact that this was a classic for many '90s kids, and it’s only big star at the time was Robin Williams. Packed with three stars and one actress who is on the rise (but has a pretty devoted cult following due to her involvement in “Doctor Who”), there’s been plenty of push-back. It also didn’t help that nobody knew what the movie was going to be about. “Is it a remake? Is it a reboot? Is it a sequel?” We now know it seems to be... a combo of a sequel and a reboot.

Now that we know what it is -- that instead of it being an old board game with magical powers, it is an old video game with magical powers -- we can finally make judgments. As you saw above, there’s already major backlash, but scroll through the comments and you’ll see plenty defending the movie, especially since nobody has seen it yet! How can anybody make judgments already? Oh right, Ghostbusters did almost tear this country apart last summer...

Personally, I wasn’t a fan of Ghostbusters from the trailer, and then when I was invited to a free screening, I still wasn’t big on it. Ghostbusters wasn’t a movie I was going to throw down money on from the get go. I liked the people involved and loved the original, but the trailer showed me the humor and CGI stuff wasn’t gonna work for me, and it was pretty much how I felt when watching it. It was no big deal to me and didn’t upset. Jumanji 2, however, looks like something I would see opening weekend if it wasn’t Christmas, but you can bet your bottom dollar I’m going to be spending less gross dollars than that to see this in theaters after Christmas.

I can go either way with Jumaji 2 being a board game or a video game because I honestly don’t care. These teens we’re following get sucked into a game of survival in the jungle. That’s all they need to do to make a Jumanji movie. Giving them all powers like video game characters and making the threats appear more real is great! It adds to the whole and expands on the original premise, which blockbuster sequels are supposed to do! It’s the same very basic idea of the game but everything else seems completely different and, honestly, like more fun. It might help that the original isn’t as close to my heart as maybe some others, especially since I haven’t seen it in years. Plus, underneath it all, Jack Black plays a popular teen girl, which is just hilarious to me and I want that in my life. It’ll probably be his toughest acting role to date and I feel I can say it will be a lot of fun to watch. Opposed to this movie or not, I would say at least check it out for that.

Jumaji 2: Welcome to the Jungle comes out just in time for Christmas, because what better time to go on an adventure in the jungle where, like the trailer’s theme song describes it, “you’re gonna dieeeee!”?