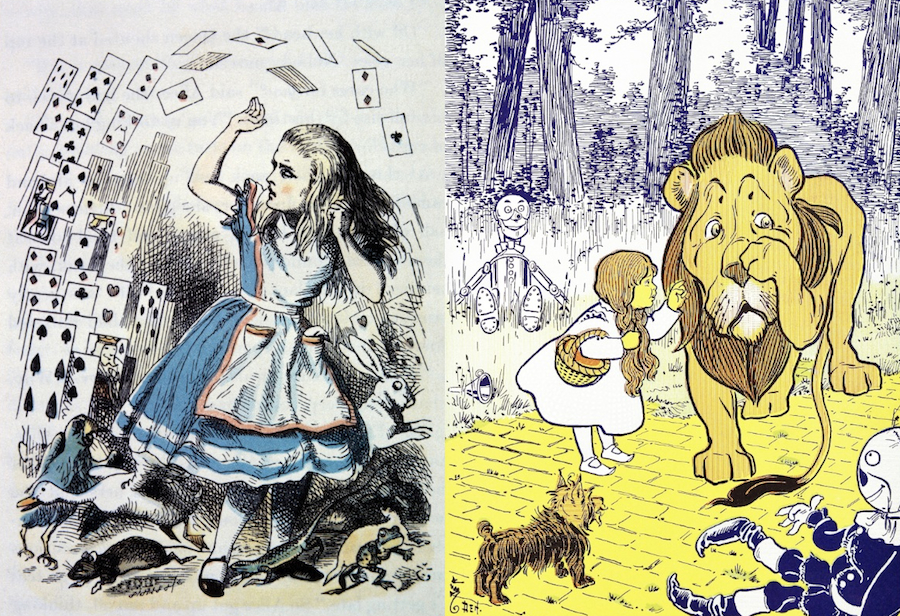 If you have ever wondered why there are so many Robin Hood movies or why they're so many different iterations of Sherlock Holmes, it is because they exist in the beautiful world of Public Domain. This vast wilderness of imagination has plenty of decades-old characters beloved by people of all ages ripe for the picking when it comes to satisfying that remake craving everyone seems to be having these days. That's right, the PD is the place to be when reboot ideas for video games, toy franchises, board games, and fantasy novels aren't on the slate of things to do. Now it seems one streaming giant is looking to jump head-first into this pool of literary greatness and rise to the surface with not one but two notorious leading ladies. One is a heel-clicking, witch-crushing machine, and the other is a psychedelic tea-drinking adventurer known for her inability at being punctual. Netflix is bringing two worlds together for what's poised to be one wild ride of a crossover. So get ready to have your house fly through a tornado then down the rabbit hole because there is a Dorothy & Alice film following their fantastical friendship on its way.

The Cheshire Cat is out of the bag: I’m writing DOROTHY & ALICE for @Netflix, a fantasy adventure epic. I grew up reading these books & this project has been endlessly fun to craft - to reinvent treasured characters and explore the worlds I wanted to inhabit as a kid. pic.twitter.com/oaythAz4ae

Writer Anna Klassen broke the news via her Twitter account talking about how excited she was to be penning the crossover movie. Klassen also stated her affinity for the source material and how this opportunity is a dream come true for someone that enjoyed getting lost in these mystical worlds as a child. Klassen recently garnered some attention when her script for a J.K. Rowling biopic made the 2017 Black List. Now it seems she will be reworking a script written by Justin Mers, acquired back in 2017. The story in that script revolves around Dorothy having terrible nightmares about Oz, and this causes her to get sent to a mental institution specializing in girls who have bad dreams. There she meets up with Alice, and the two embark on great adventures together to not only save the imagination world but the real world as well. This concept sounds pretty intriguing, but Netflix and I, Tonya producer Bryan Unkeless, who is developing the project in collaboration with the streaming service under his Clubhouse Pictures banner, want to go in a different direction. Whether they go with a darker version or possibly even go in the more family-friendly direction remains to be seen. However, one thing that is a breath of fresh air is that the people at Netflix are going outside the box on this one with Klassen. Bringing in some new talent to get an innovative and unique take is a robust way to go. Moreover, given the writer's passion for the characters, and the fact that this is a big break for the former entertainment writer from Bustle and Newsweek, fans are in for something extraordinary. And it could be the first in a long line of projects if this potential franchise starter ends up being successful.