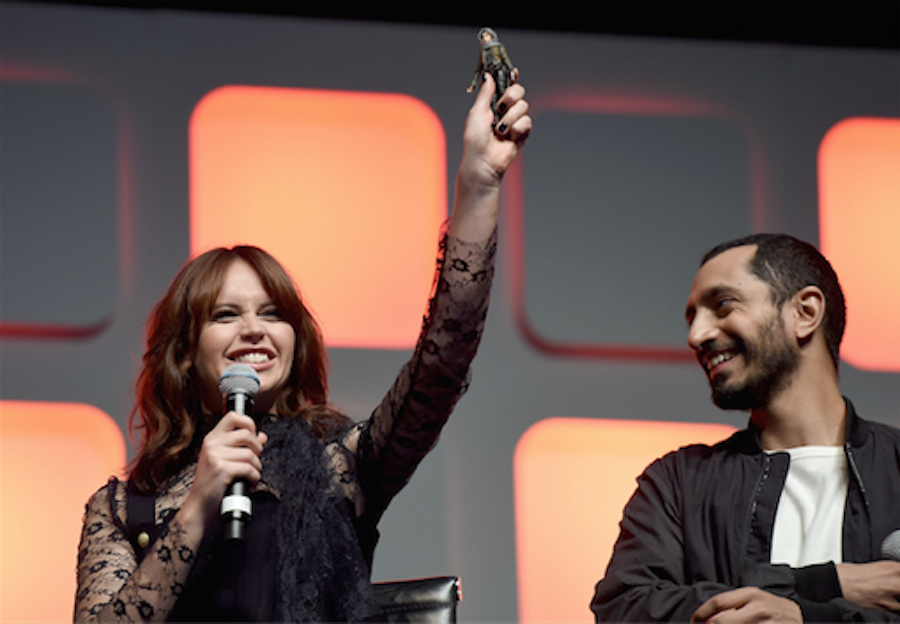 The Force was strong in London over the weekend as the annual Star Wars Celebration Europe event took place and dropped all kinds of hints and goodies about the exciting upcoming Star Wars Universe properties, including December’s Rogue One, next year’s Episode VIII, and the much-anticipated Han Solo spinoff!

For those of you who were, for some reason, unable to make it to England to attend SWCE, here is all you need to know!

The panel for the upcoming prequel was jam-packed, as stars from the movie took the stage, including Ben Mendelsohn in full Director Krennic costume! Other attending castmembers included star Felicity Jones (who got to show off Hasbro’s new Jyn Erso action figure!), Diego Luna, Forest Whitaker, Alan Tudyk, and more, as well as director Gareth Edwards and producer Kathleen Kennedy.

Each actor got to talk a bit about their characters, with varying degrees of specificity. Jones remarked that her character is different from other Star Wars heroes because she’s already fully-realized and knows who she is. Mads Mikkelsen plays her father, Galen Erso, who has “invented something so beautiful, that it might change the world.” Tudyk revealed that his character is a droid called K-2SO and is the BFF of Diego Luna’s character, Cassian, and is also a bit “unsettling”… whatever that means!

They also dropped a new trailer (though it’s more of a reel) featuring all kinds of new footage to geek out over. From the looks of it, it seems like this movie is going to be less “space opera” and more Saving Private Ryan!

It was also confirmed that all of the spinoff films will not feature the iconic opening crawl that is a staple of the main Star Wars films.

Speaking of which… director Rian Johnson confirmed our suspicions that the new movie will pick up exactly where The Force Awakens left off – with Rey first encountering Luke Skywalker on Ahch-To -- unlike all other Star Wars film before, which typically open with a time-jump.

Johnson also revealed that much of the film’s aesthetic was inspired by classics like 12 O’clock High, Bridge of the River Kwai, and Three Outlaw Samurai, so make of that what you will! In addition, Johnson said that this next movie will be very character-driven, getting to the very heart and soul of the heroes and villains alike!

Oh, and not to worry, OT purists – Johnson assured us that Episode VIII will employ as many practical effects as possible!

Carrie Fisher, Mark Hamill, and John Boyega also joined the fun on stage, where Carrie revealed that, in her first meeting with Adam Driver (who plays her erstwhile son, Kylo Ren), she spanked him(!!), and Mark revealed that he was convinced his big entrance in TFA was when Rey Force-stole the lightsaber from Kylo Ren during the forest fight at the end. Whomp-whooomp!

Check out more with Hamill below!

Actor Alden Ehrenreich made his official debut as the new, young Han Solo! Apparently, he was the very first actor that auditioned for the role (out of some 3,000 contenders), and his all-important chemistry readings involved Chewbacca and, of course, Han’s #1 boo, the Millennium Falcon.

Directors Phil Lord and Chris Miller were also on hand, who assured everyone with their undying affection for and understanding of the character (not to mention their existing resume, which includes The Lego Movie) that this spinoff is in good hands!

The trailer for Season 3 of “Star Wars Rebels” debuted at SWCE, and fans of Grand Admiral Thrawn (voiced by Lars Mikkelsen) were stoked to see that he will be joining the series!

Those awaiting TFA to come to EA’s Star Wars Battlefront will have to wait a little longer, as that doesn’t seem to be in the agenda. However, the video game will be featuring Rogue One in future editions. Look out for Rogue One: Scarif sometime this year, and in the meantime, check out the trailer for Star Wars Battlefront: Death Star below!

(Photo via Ben A. Pruchnie/Getty Images for Walt Disney Studios)