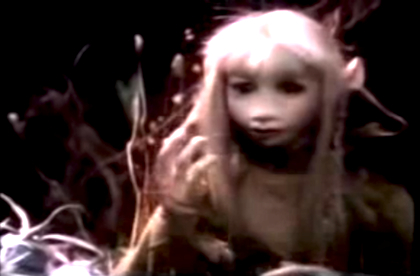 An all-puppet film about warring wizards set in another universe or a distant planet, and they don’t even sing! What madness is this? It’s Jim Henson’s 1982 film The Dark Crystal, and it could be one of the greatest things he’s ever made. Puppets even draw blood in this, and it’s a kid’s movie! Before you leap to your Netflix accounts to watch it, check out the trailer:

As mentioned before, The Dark Crystal takes place in a world where rival wizards have been fighting for some time. The two species of wizards appeared a thousand years ago when the Dark Crystal cracked, a shard of it split it away, and it was thought to be lost forever. On one end of the battle, you have the Skeksis (the bad guys), who are reptilian creatures that rule the planet Thra. At the other end, we have the urRu or Mystics (the good guys), who are hunchbacked creatures that resemble a dog/dinosaur hybrid. But neither of these two species fighting each other are where you will find the main character. Our focus is on the last known Gelfing, a humanoid type creature with pointed ears and a friendly “Care Bear” face, named Jen. Jen is very much a boy despite having a girl’s name, much like a man from “Firefly” named Jayne.

Jen, however, is not a crazy psychopath like Jayne from “Firefly”. Growing up without knowing his family, or anybody else from his species for that matter, Jen was raised by the Mystics. He is told at the beginning of the film that he is special and must go on a quest by an elderly man who has been looking after him for a long time. Yeah, it sounds pretty similar to Star Wars, specifically the relationship between Luke Skywalker and Obi-Wan Kenobi, but that’s pretty much where the Star Wars plot comparisons end. Jen’s journey is to retrieve the missing crystal shard. If he fails to do so by the time the three suns meet, then the Skeksis will rule over Thra forever. Whoa, talk about grown up responsibilities, kid.

After that, I won’t tell you anything else that will happen, because why ruin an adventure for you? I can assure you that the movie isn’t all about mythical beings fighting each other. There’s plenty of adventure, like in a shortened puppet-cast version of Lord of the Rings, and there’s even tender moments, which between puppets means it’s going to get raunchy! (No, there are no raunchy moments; just good and innocent times.)

What I am willing to tell you is that Jim Henson personally puppeteers many of the characters, including Jen. Henson’s co-director, Frank Oz (who, oddly enough, might be best known for puppeteering and voicing Yoda in Star Wars), also puppeteers various characters in The Dark Crystal. Oz maintained a long standing working relationship with the late Henson on Labyrinth and many film and television incarnations of The Muppets.

What really sets this film apart from a lot of the big-budget action flicks you see today is that the world and characters actually look pretty real. Not to say something is better than something else, but Avatar did some similar things with world-building that The Dark Crystal did too. The reason why I will watch The Dark Crystal more times than Avatar has nothing to do with the run time, but the fact that the puppets in The Dark Crystal look like they’re actually there and not computer projections, and that goes for the sets as well. The Dark Crystal puts on display the lost art form of puppet design and puppeteering.

Another reason why you may want to check out The Dark Crystal is that talks of a sequel have been around for years. The latest whispers actually come in the form of a prequel. On July 1 of 2013, The Jim Henson Company put out a “Dark Crystal Author Quest Contest” to write a new Dark Crystal novel. Over the years, there has been much work made in an expanded universe, even a special Marvel comic book. The winner of the contest was a Minnesota man named J.M. (Joseph) Lee for his story “The Ring of Dreams”. Sometime after this event, Lisa Henson released a statement that the prequel film will be heading into production, but she and her late father’s company aren’t sure when it will happen yet. No word either on if Lee will serve as screenwriter.

So that’s it, The Dark Crystal is a wonderful movie to watch at any age. It’s got plenty of violence but also very sweet moments. Plus, I just love puppets and I hope you do too!