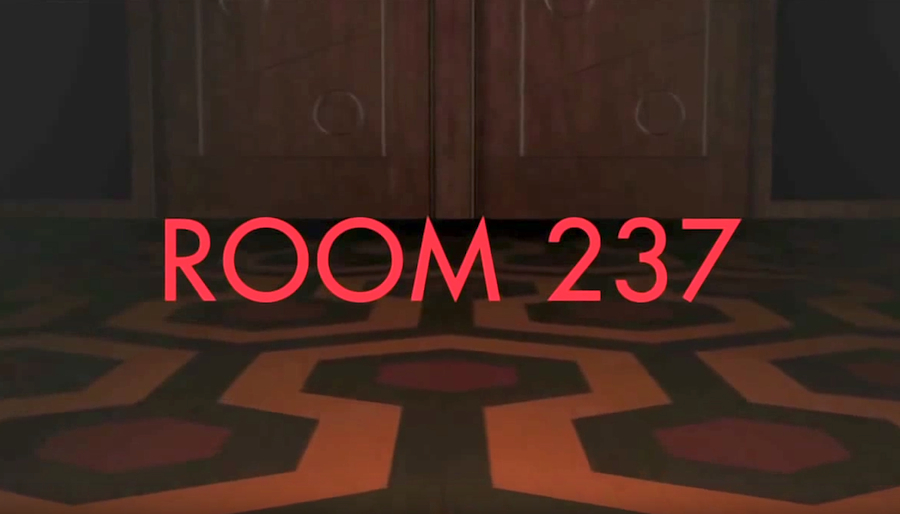 Did you know that legendary director Stanley Kubrick faked the Moon landing? How about his obsession with the Holocaust? Or surely you heard about his interest in the genocide of Native Americans in Western situation? Today we’re going to talk about a movie streaming on Netflix called Room 237, where several randos get on a microphone and talk about mostly bonkers conspiracy theories that are more than likely untrue… all over classic movie footage!

This “documentary” focuses on a lot of Kubrick’s career, his interests, his failed movie ideas, and his family history. For those parts of it, Room 237 is actually a pretty good documentary, but insanity looms over it the whole time, which makes it pretty perfect for Kubrick, if you know about his films. Specifically, though, this documentary focuses on the Kubrick horror classic The Shining and things that some people who sound like they’re on thin ice mentally saw in it.

Throughout the documentary, you will learn things about Kubrick that are factual, as well as some speculations that may be disputed but still sound plausible. Front and center, however, are ridiculous accusations of The Shining containing messages of anti-Semitism, some hard stretches pointing towards an allegory for the historical genocide of Native Americans, sexual repression (which could be true but there’s a part with a stapler that… you just have to watch), how Kubrick may have been involved in shooting the "fake" Moon landing, and, finally, a man interviewed for this who has crept so far down into the rabbit hole of The Shining conspiracies that his brain is causing him to believe that people are following him when he uses payphones (those still exist?) and that he will get audited by the IRS because, of course, he knows too much.

Without having read anything on Room 237 director Rodney Ascher, mainly because I want to keep his motivations behind making this a secret, I have come up with my own questions and theories about this documentary. Does Ascher really believe the people he let rant to him? Was this all a trip into the obsessive psyche of crazed fans of The Shining? I would like to believe the latter, but like many works of art, this feels better left unexplored to me, as I am quite sure Ascher has had to speak about what exactly this melting pot of mental disorders is. But a clear theory outside of The Shining involving a little known and dark Kubrick family event is revealed.

One of Kubrick’s daughters, Vivian Kubrick, recently tweeted out her thoughts on the theory that her father shot a fake video of the 1969 Moon landing for the United States government. Before getting to her answer in the present, it should be noted that Room 237, which was made three to four years before she made these comments, talks a bit about her past and the secrets surrounding it. In the late-'90s Kubrick made his final film called Eyes Wide Shut, with the well-documented Scientologist Tom Cruise.

Eyes Wide Shut is also a film speculated by many people to be Kubrick revealing to the public of a dark underground cult in Hollywood, and possibly others. It gets murky as to what happened (and I probably will begin to sound like one of the folks interviewed in Room 237), but what is actually true is the fact that Vivian and Papa Kubrick had a falling out during the making of this, so much so that they never saw or spoke to one another again for the rest of Kubrick’s life. In recent years, Vivian is said to have reconnected with her family and has appeared in the public more, but there was a weird time where she went away from her family to a different part of the world and is said to have been in some sort of cult or religious organization. She hasn’t really commented on those crazy days, and it’s not clear if Scientology/Cruise had anything to do with it, but she recently told the public this in regards to her father and the moon landing: 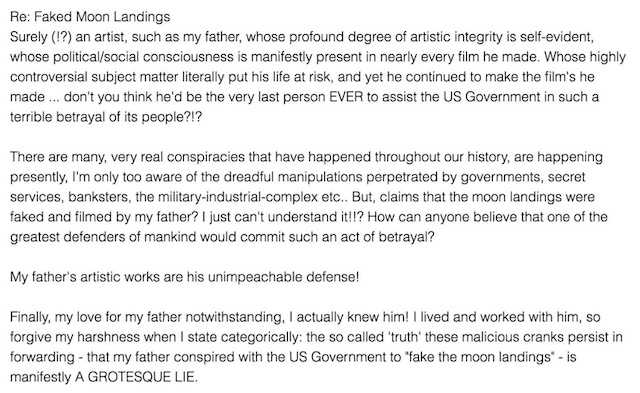 Lastly, the reason we’re all here… Room 237. If you want tips on how to watch, this then I highly recommend watching it with like-minded people. It works at its best with fans of Kubrick and The Shining and who knows, you can maybe even come up with your own conspiracy theories about the making of this documentary!