HIDDEN ON STREAMING: "Magic For Humans" 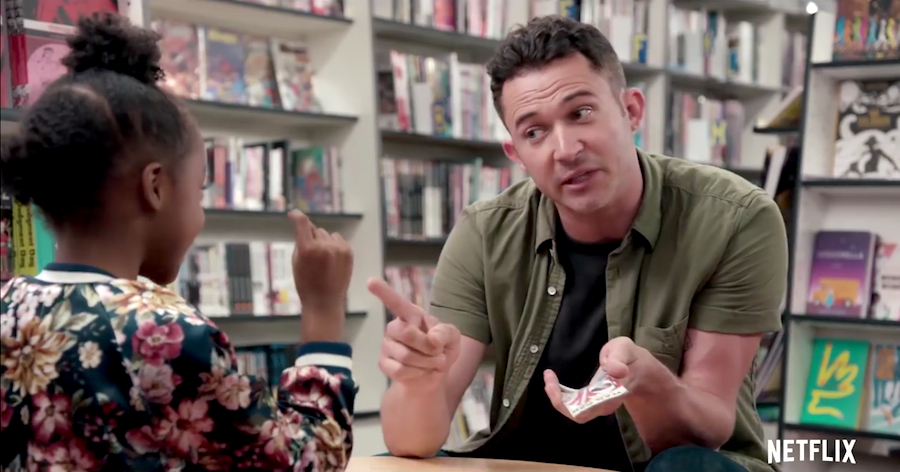 A new Netflix original is following in the footsteps of showmen like Criss Angel and David Blaine. Justin Willman is the magician of the hour, and he hosts the show "Magic For Humans" while performing magic tricks for us the audience and for real people on the street. The major difference between this show and other magic showcases is its lightheartedness. Hillman isn't trying to freak us out; he’s just trying to make us smile. His magic tricks are meant to impress us, of course, and impress us they do. I can’t stop looking for the telltale giveaways of how he does his tricks, which I only catch when he wants them to be caught. Even as he mystifies everybody, and maybe even freaks them out a tiny bit, he’s mostly looking to brighten up someone’s day. His comedic timing means that every trick has a funny side to it. He uses magic tricks in new ways, to comment on different things like conspiracy theories and self control. Hilarious, right? Willman uses these themes, which might not necessarily be funny or make you think of magic, and manages to do both.

Willman has been doing magic his whole life, as we see in home videos from his childhood sprinkled throughout the show. He’s figured out a way to take his magic from a street performance to a story-telling device. Part of the fun of the show is watching people’s reactions to his tricks. You get a sense that our host is doing magic not to make people believers, but to see them smile.

You might have seen a clip from his show where he convinces a man that he’s been turned invisible. In this trick, we get to see how the magic is done, probably because it’s not really magic at all. Our host recruits a whole fake audience of actors, and then an unknowing passerby gets “randomly” chosen to be turned invisible. The audience pretends like they can’t see him, and we get to see how one man reacts to being turned invisible. Two men, actually, because he does the trick twice. The two different reactions from these participants -- one excited, the other freaking out a little -- shows just how different and how funny people can be.

In fact, people’s reactions might be the best part of the show. From someone’s attitude you can see their skepticism or their complete acceptance, but either option ends with someone being shocked, impressed, and probably nervous-laughing. The tricks get bigger and bolder as the show goes on, but the simple sleights-of-hand are what fill in the gaps and make this show more endearing and sweet than others like it. It’s not trying hard to make you a believer, it doesn't care really if you know how the trick is done. The fun is in watching it go down and imagining how you would react to a trick, or if, say, you thought you had been turned invisible. Check out the six episodes now on Netflix!