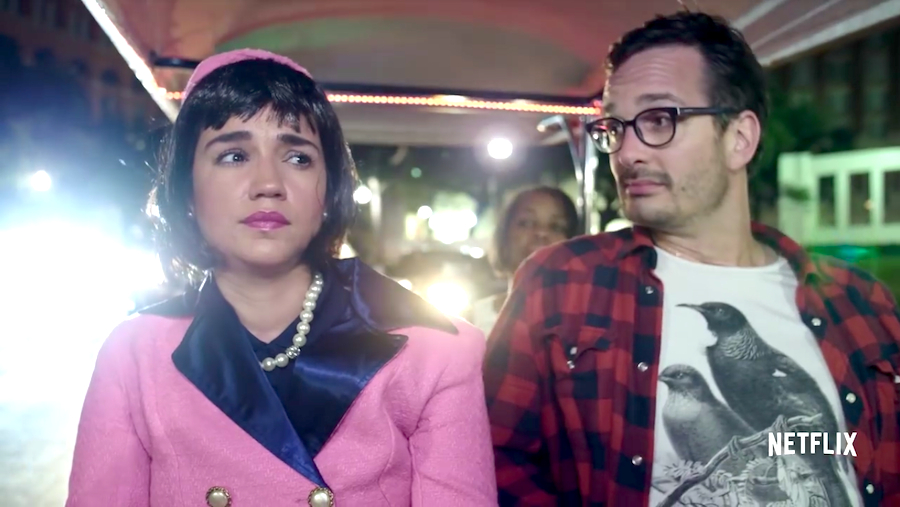 New Zealand journalist David Farrier will take you on a wild misadventure in the new Netflix documentary series “Dark Tourist”, available now to stream. This show is all about the macabre, eerie, and even disturbing aspects of people and places all around the world. Farrier follows the paths that so-called “dark tourists” take in different countries, assuming where they like to go and what they find exciting. The show is quick and determined to separate Farrier from these dark tourists—he’s simply following in their footsteps to try to understand what enjoyment these mysterious unnamed travelers get out of visiting the nastiest of attractions. Part of the fun of the show is watching Farrier react to the weird people and uncomfortable positions he finds himself in. Farrier is the foil that reminds us that what we’re seeing is not “normal”.

If you enjoy the darker aspects of society or are drawn to crime stories and spooky monuments, you should definitely check out this show. However, it does more than just show off some scary spots. It also comments on the exploitative nature of dark tourism. The ultimate takeaway seems to be that, if there’s a profit to be made, nothing is taboo. At times, "Dark Tourist" and our tour guide Farrier seem complicit in this exploitation. For example, when Farrier laughs uncomfortably during a reenactment of a border crossing on the Mexican border with other “tourists”, it reminds us that there are some things that shouldn’t be turned into an adventure for a man from New Zealand with a camera crew. Even if Farrier manages to turn most segments into a lesson in compassion, I can’t help but feel that he sometimes promotes the very thing he’s trying to condemn—exploitation of tragedy for curiosity’s sake. Often, though, he succeeds in revealing how the phenomenon of dark tourism can turn tragedy into entertainment, and human suffering into profit.

In one episode, Ferrier tells his Jeffrey Dahmer-obsessed friend, “We’re all sickos, Natalie, that’s what I think.” "Dark Tourist" reminds us that, as humans, we are all somewhat drawn to the graphic and morbid parts of history, even as we condemn them. We all have an urge to learn more about places and events that are so dark that they are difficult for us to comprehend. In the end, Farrier contests that people need to be shocked with the reality of history so that they don’t forget the past. In fact, there are plenty of lessons to be learned in “Dark Tourist”. Maybe I’m being optimistic, but Farrier seems to learn through the show that some (keyword, some) cultures and cultural practices that at first seemed “dark” to him were simply things he didn't understand. One would think that, by understanding them, he can change his views to ones more accepting and well-rounded. The highlight of the show for me is the access he provides to secretive countries like Turkmenistan and Myanmar. His travels through their oddly-empty capital cities offer insight into places barely understood and rarely seen. If you can make it through all the heaviness, you’ll be rewarded with some lighter moments, like Farrier attending a vampire birthday party. If Farrier somehow makes a second season before all his exposure to radiation gets to him, I’ll be ready to watch more of this dark but informative show.