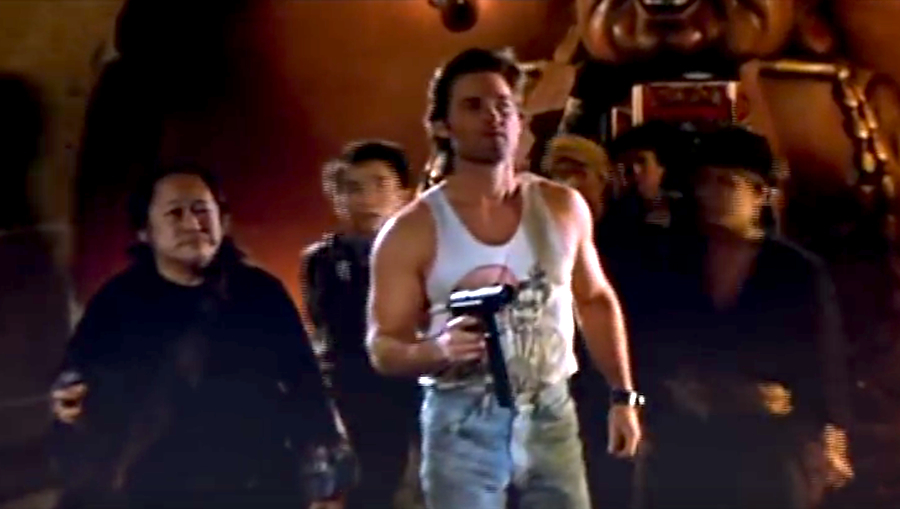 Once in a while, a movie comes along from a very famous director starring very famous actors and does so awful at the box office that it seems like it would be lost forever… until it gets a fan base on cable TV and gets a new life. Today, that flick is Big Trouble in Little China, directed Halloween mastermind James Carpenter and starring uncredited Elvis Presley voice actor from Forrest Gump, Kurt Russell.

What’s this movie about? Well, the title explains it all… sort of. Really, it’s your basic kidnapping story where Russell is an All-American truck driver named Jack Burton who has to team up with his friend Wang to save Wang’s girlfriend after she is kidnapped by Chinatown thugs. We then get into the seedy underbelly of Chinatown where we see that the thugs don’t run much but instead four sorcerers come into the picture and an all-out slaughter at their hands ensues. From then on, we don’t get a full explanation about them. (It’s the '80s. Magic is real. Get over it. Enjoy the movie.)

What makes this movie great is, it begs you NOT to ask questions. It’s a popcorn flick in its purest and most entertaining form. Just a couple of guys wandering around Chinatown, getting into fistfights, and some dude shoots lightening out of his hands at our heroes. That’s the movie. There’s also some cool-looking demons made with some fantastic practical effects, but it’s all about just having a good time and not taking things seriously.

A lot of the delivery in the dialogue is funny, the action is pretty over-the-top, and the whole movie itself is quirky, but that seems to be Carpenter’s style at times when he cares about a project. With Big Trouble in Little China, however, it is said that Carpenter didn’t totally care. He had a feeling that, despite a $20 million dollar budget, the film would flop, so the over-the-top-ness is in full effect, and through not caring, Carpenter made a masterpiece with a massive cult following that still stands today.

Much of the following came through massive reruns on cable television in the early-'90s, which, incidentally, is how I first came across it. Did I understand what I was watching? Most likely not, but I saw Teenage Mutant Ninja Turtle-style action going on and that’s all I needed to get into it. The following with older folks (teens and above), however, was so big that its cultural significance was felt most famously on Sega, when Mortal Kombat was released. Remember the popular lightning sorcerer Raiden? After watching Big Trouble in Little China, you’ll understand where his straw hat and lightning abilities come from, especially since, in Chinese and Japanese cultures, a lightning God is viewed more as a demon than a hero, which the Mortal Kombat creators may not have known.

Lastly, there was news in June 2015 that Dwayne “The Rock” Johnson was looking to do a remake of Big Trouble in Little China with himself in the starring role of Jack Burton and bringing in Carpenter in some capacity. Well, I don’t like that at all. I recently re-watched the movie to make sure it still holds up, and it does. I can say that the movie is great the way it is and doesn’t need a remake... but I’d be down for a sequel!

A sequel could also fit The Rock in this universe as a completely new and original character made just for him. Given Big Trouble in Little China’s popularity, they could even make the sequel today for a pretty good budget of $60 million and easily make a $100 million profit. No news on a sequel or the remake other than Carpenter at one point stating that he has not even met with The Rock to discuss anything.

Be sure to check out Big Trouble in Little China today on Netflix! I hope you enjoy!