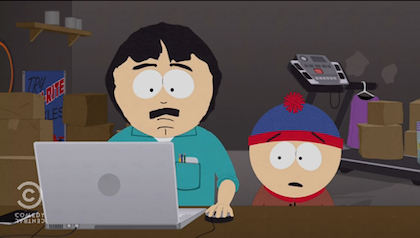 If there’s one thing “South Park” creators Matt Stone and Trey Parker excel at – besides biting social commentary – it’s writing a damn good song. They’ve proved this well enough with their full-length South Park: Bigger, Longer, and Uncut feature film, that doubled as a musical, and also with their ACTUAL stage musical, The Book of Mormon, which has won more Tony Awards than they can carry.

So, should it be any surprise that they’ve also penned a rather decent Lorde-inspired jam? In a recent episode of “South Park”, Stone and Parker poked some good-natured fun at the Grammy-winning New Zealander by declaring that she is actually the alter-ego of Stan’s dad. To that end, we actually get to see Randy Marsh/Lorde composing one of his/her next “hits”, and they got none other than Sia to sing it! (Who knew Sia could do such a great Lorde impression?)

After the show aired, Lorde herself exhibited her good sportsmanship, declaring the episode and the song “really funny” and even repeating the fake song’s refrain:

Since then, the song has seemed to take on a life of its own, to the point that the folks at “South Park” have actually released the full-length version of the jam (entitled “Push [Feeling Good on a Wednesday]”). Take a listen below and tell me that, if you weren’t paying close attention to the lyrics, you wouldn’t easily mistake this for an actual Top 40 pop tune?