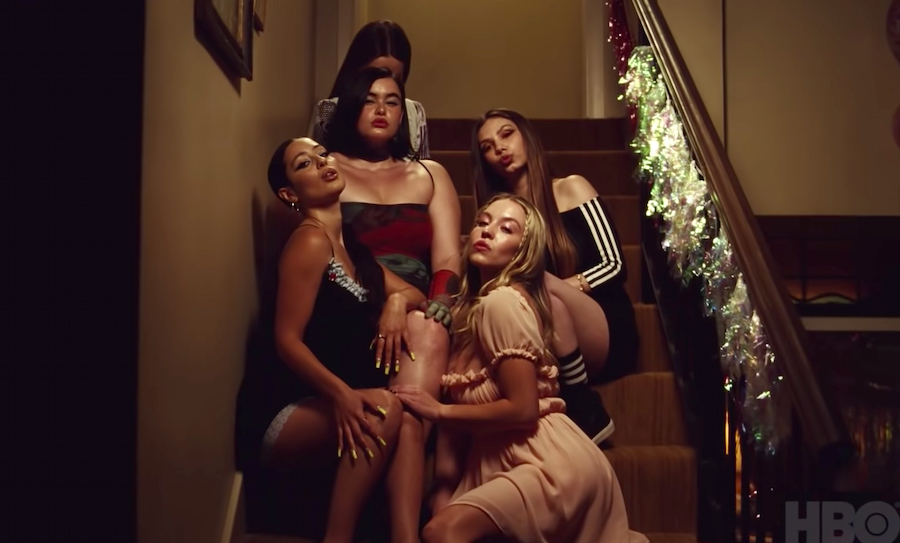 The first episode of "Euphoria" Season 2 dropped on Sunday night (January 9), and you know what that means: Actively obsessing over characters’ outfits? Recreating scenes? Recording our reactions to watching the first episode? Make-up inspirations? Yes, yes, and all yes!

With so much already going down in the first episode -- from the drama and intensity paired with iconic scenes and characters -- you already know users on TikTok are making "Euphoria" trend online. Let’s get to it!

First off: character outfits! TikTok user @itmebry follows a recently popular TikTok trend in this video with dialogue from "SpongeBob SquarePants". Four girls are “walking” into school in regular outfits when someone calls out, “And why aren’t you in uniform?!” They then transition into outfits that are perfect replicas of "Euphoria"’s Cassie, Maddie, Jules, and Rue’s iconic outfits from Season 1 in style. This is definitely one of my favorite videos from this trend!

♬And why arent you in uniform - No context Spongebob

What about recreating scenes? Well, before I show you this one, let me just say: #SpoilerAlert! In another recent TikTok trend, TikTok user @jemeryas.amari follows the “Tell me why I shouldn’t throw this drink in your face” trend, calling to mind the Nate and Fez scene at the end of Episode 1 when Fez hits Nate with the bottle. Yikes!

Of course, many viewers had mixed reactions from all the things that occurred in the first episode of Season 1. Without giving more spoilers away, TikTok user @abriah_serenity tells us how she feels -- or better yet, shows us, because she, just like us, is too stunned to speak!

Finally, makeup inspirations! Perhaps one of my favorite Euphoria trends, many TikTok creatives are pitching in their character-styled makeup looks from Euphoria. TikTok user @karencamargo_ shows us a super gorgeous look from beautiful palettes of shiny colors paired off with rhinestones for her eyes. I love everything about this look!

With all the videos created on TikTok just in the last day, I can’t even imagine what users will post for the rest of the season! For now, let’s just anticipate and cross our fingers that next week comes sooner!!!