Ellen Degeneres Teases the Oscars, With A Little Help From Some Friends 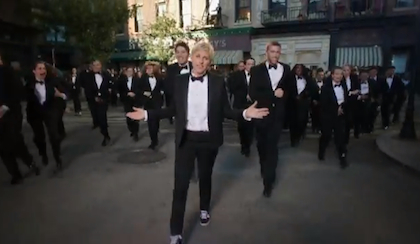 Ahhhhh, it's getting closer!

With the announcements of both the SAG Awards and Golden Globe Awards nominees in recent weeks, we are skidding headlong toward the apex of Award Season -- the Oscars!

Now the anticipation really kicks into gear, because the first promo for the ceremony has been released by the AMPAS! Set to "The Walker" byFitz & The Tantrums, the one-minute clip features Oscars host Ellen Degeneres throwing on her best tux and doing her best impromptu dance down what appears to be the backlot at Universal Studios. She picked up a few friends along the way, exploding into a mass dance routine in the middle of the (fake) street!

This year's Oscar race is set to be a doozy, with whole scores of magnificent films being released seemingly within the last few months. Judging by the Golden Globes and other associations handing out awards lately, the frontrunners seem to be 12 Years a Slave andAmerican Hustle. You don't get more diverse than that, eh?

The Oscar nominees will be announced on January 14, and the statuettes will be handed out on March 2!