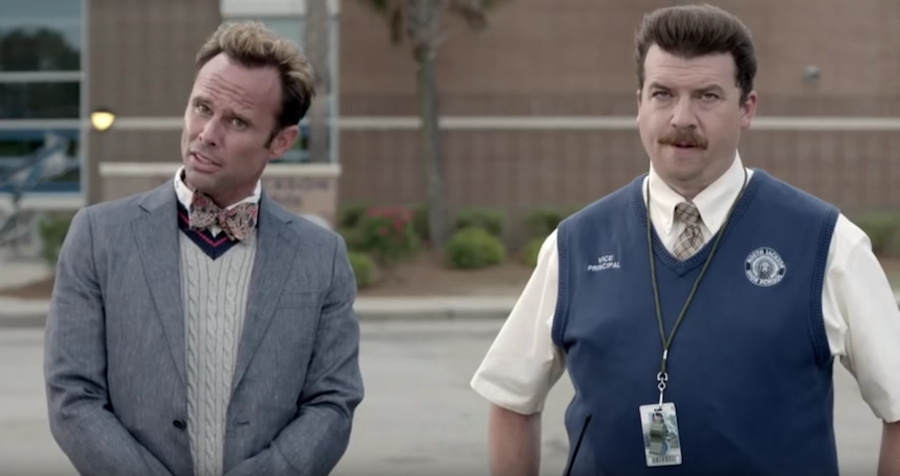 The start of the show drops us in with McBride as vice principal in charge of discipline, Neal Gamby, and his rival vice principal of curriculum, Lee Russell (Walton Goggins). Both are gunning for the newly open position of principal of the high school where they work. Both Gamby and Russell are pretty terrible people it would seem, but Gamby definitely takes the cake. He’s very much an alpha-male with a casually racist and politically incorrect streak, much like that of Kenny Powers from “East, Bound and Down”.

The plot thickens for Gamby when an outside hire is named the new principal. It makes his blood boil and he reacts childish towards the new principal, Dr. Belinda Brown (Kimberly Hebert Gregory). The episode mainly follows Gamby as he already makes some cringe-worthy choices and threatens innocent students in his pursuit to take down Dr. Brown. The problem is, like with Kenny Powers, Gamby lacks a lot of smarts in his schemes. He believes that people will do his bidding just because he forcefully asks them and makes threats, but most people around him do not respect him enough to take his threats seriously.

But the main thing that separates Kenny Powers from Neal Gamby is the same thing that unites them -- their need to be top dog. In “East Bound and Down”, Kenny Powers is at first a substitute gym teacher after ruining his pro-baseball career but wants nothing to do with that job. Instead, Kenny is all about getting back into the major leagues (at least in the first season). Gamby, on the other hand, is all about running the school, which makes one think he may actually care about education. At the end of the day, these conflicting interests unite the two different characters. No matter what his interests are in a given season, Kenny Powers is in pursuit of some seat of power, and what exactly is Gamby trying to get by sitting in his own office in the big principal’s throne chair? Yup.

Much like “East, Bound and Down” did every season, the entire two-season run of “Vice Principals” will have an over-arching journey and goal for its characters. I could be the only one who thinks this, but I do believe that each season of “East, Bound and Down” plays out like a movie with a clear beginning, middle, and end. It’s not like it’s something we’ve never seen before (look at almost every British show ever), but since we only have one other show with McBride and Hill to go off, it’s safe to say this is kind of their thing. Come next summer, “Vice Principals” is expected to have a clear and satisfying ending.

I will not spoil another thing for you, but I will say that, what future episodes hold is only up to the imagination. This episode dove very deep into McBride’s character of Neal Gamby, but make no mistake -- Goggins’s character Lee Russell looks to be a major part of this show, if not just as much as McBride. Maybe next episode we’ll see it from Russell’s point of view, and maybe we won't ever. “East, Bound and Down”, aside from a few opening scenes, was all about Kenny Powers’s story told through Kenny Powers’s eyes, but something about this feels like some episodes will be Russell’s POV.

No matter what I’m telling you, the fact is that this show is fun, dark, and hysterical. It’s a good watch, and if you’re still in school (you actually are probably are too young to be watching anything on HBO, so go to bed!), it’ll make you wonder what’s really going on behind the scenes of your school, and just how cutthroat the faculty is to get ahead. So, enjoy “Vice Principals” as you get ready to go back to school!