[email protected] RECAP: Everything We Learned About The Upcoming 'Bill & Ted' Sequel From Their Panel! 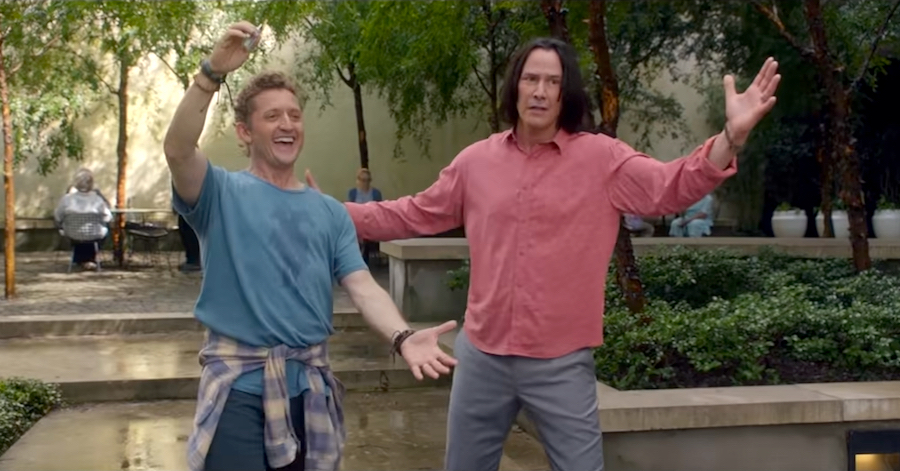 This past weekend, the San Diego Convention Center was empty and desolate. On a weekend that would have normally hosted thousands of attendees prowling various star-studded panels to learn about the newest movies, graphic novels, TV series, books, and more, the San Diego Convention Center was reduced to a slew of deserted, echoing auditoriums and conference rooms. Despite what these empty halls may have indicated, Comic-Con partied on with hundreds of panels being hosted via the internet.

One particularly excellent panel dove into the classic cultural phenomenon of the late-80s, Bill & Ted's Excellent Adventure. And, of course, what would a Bill & Ted panel be without Bill & Ted? That’s right, [email protected] “attendees” got to see the original actors, Keanu Reeves and Alex Winter, discuss the upcoming long-awaited sequel, Bill & Ted Face the Music, in a special livestream. Joining them on the panel were co-starsSamara Weaving and Brigette Lundy-Paine, who portray Bill and Ted’s daughters in the new movie. Additional panel guests included writers Ed Solomon and Chris Matheson, directorDean Parisot, and actor William Sadler.

During the panel, Alex Winter, who plays Bill, recalled the dinner proposition that jumpstarted the long journey of creating the latest Bill & Ted sequel. As it turns out, Bill & Ted Face the Music was never exactly a part of the plan. “None of us had really thought about embarking on a journey of trying to make a third,” he said, but when Matheson and Solomon approached Reeves and Winter about it roughly 10 years ago, the seed was planted. Although it took some time to realize the film, it’s definitely one that’s worth the wait.

The remainder of the panel was filled with heartfelt and sincere moments as the cast and crew recalled their favorite moments from production. For Bill Sadler, who plays Death, his “favorite” moment was also a little bit painful. Despite having sprained his wrist on set while playing hopscotch for the first scene of the film, he recalls that first moment of that scene when he was reunited with Keanu and Alex on-screen. “It was like we had never left off,” he stated.

And that sentiment rang true all across the cast and crew. Samara Weaving, who plays Bill’s daughter Theo, recalls the fit of laughter that came with watching Keanu and Alex perform as their slacker metal band, Wyld Stallyns. She and Brigette, who plays Ted's daughter Billie, talked about studying their on-screen dad's mannerisms and speech patterns to be able to convincingly play their daughters while still crafting personalities of their own. Whereas Bill & Ted are the lovable dim-witted goofballs, their daughters are geeky geniuses.

“There’s no other place I can laugh like this,” Keanu attested. And when the film premieres, all of this on-set laughter and joy is of course guaranteed to transcend the screen and into the hearts of the audience, just as it did in the original movies.

Luckily, the wait for the movie is almost over. Bill & Ted Face the Music is set to be released on September 1, both in theaters (if they’re open) and On Demand. In the meantime, just remember to be excellent and wear a mask, so that we can party on again soon!