Coachella X Fortnite: The Collab We Didn't Know We Needed! 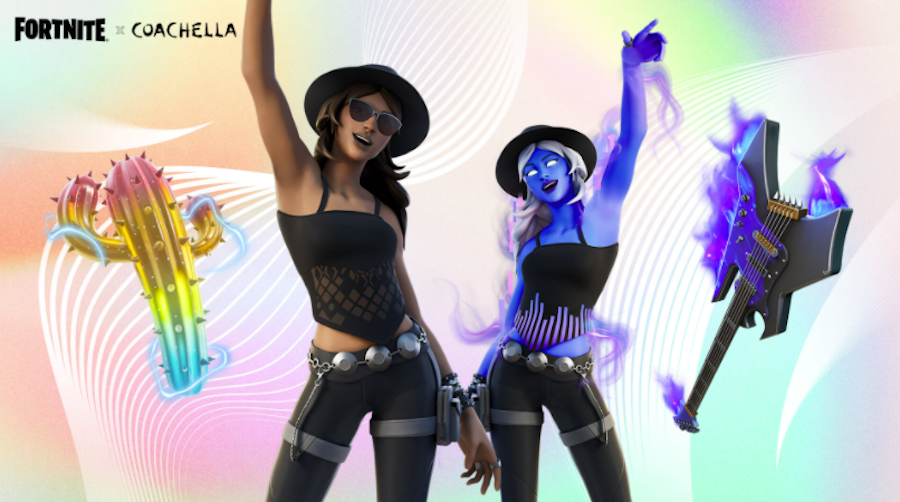 The gaming world is merging with the eccentric fashion world of Coachella! Just yesterday (April 14), Coachella announced a collaboration with the smash-hit video game Fortnite. The music festival announced that they are partnering with developer Epic Games to release Coachella-themed skins and in-game features for its first foray into gaming.

These days, Coachella is equally known for its performances as it is for the outfits attendees wear — so both should be coming to Fortnite. Coachella will release two series of skins to coincide with the first and second weekends of the festival, beginning April 14 and April 22. The outfits, inspired by the Coachella style, react to music playing in the game. The first group of items went on sale in the Fortnite shop at 8pm ET on April 14.

Additionally, Coachella will also do a takeover of the in-game Icon Radio, and players will be able to listen and bump to music by over 30 artists from this year’s festival lineup while in Fortnite vehicles, starting now through May 16.

Coachella takes over Icon Radio! Hop in to hear a fresh collection of songs from your favorite Coachella artists. pic.twitter.com/ma8qTFXfkS

Even if this is Coachella’s first time coming to the game, as we know, Fortnite has a long, long record of doing music collaborations. The game knows how to add a little something for the gaming community. Fortnite has focused more on music and live events in the last few years: Marshmello and Ariana Grande have performed, and artists have been part of musical events built in the game’s creative mode. Epic even built a studio for in-game concerts, saying the Fortnite stage should be considered a tour stop.

According to the Epic Games website, the first “Rocking at Coachella” bundle includes two skins called "Wilder" and "Lyric". The outfits also come with matching accessories in the Finfin Back Bling, Neon Biter Pickaxe, and Finfin Flair Wrap, which react to live music. Exciting!

For those looking to show off their style, especially the music-reactive bits, Fortnite is going to hold a photo contest for player screenshots shared online with the hashtag #Fortography on Twitter, or through the post flair on the r/FortNiteBR subreddit. The Fortnite team says it will share its favorites in a blog post on April 29.

But just to make this clear, this does not mean that Coachella will be live in the game; this is focusing on players dressing like they’re going to Coachella while playing the battle royal games. Apparently, we are calling it the “Coachellaverse”. How snazzy!

Dust off your gaming gear, Fortnite is back with more cool collaborations! How will you style your character for this Coachellaverse madness?