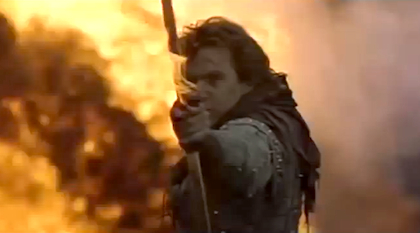 Okay, I’m abandoning the usual introductions and going straight after the elephant in the room. Yes, his accent could have been better. But one can hardly say that it ruins the film, especially since the accent in question miraculously disappears around 10 minutes or so in. If I sound somewhat defensive, I can assure you there is good reason, as Robin Hood: Prince of Thieves was a film that captured my imagination and held on to it for a good portion of my childhood. It was an exciting, funny, scary, and adventurous movie that made me feel kind of grown up because all of the adults that I knew seemed to really like it as well. Of course, people change, and over the years, as my cinematic palate began to become more developed, many of the films that I adored as a child began to look a little differently when viewed without the rose-colored lenses of nostalgia. Luckily, though, there are still some gems here and there that have managed to stand the test of time, and Robin Hood: Prince of Thieves just happens to be one of them.

As you can see from the trailer, this version of the legendary English folk hero is not entirely different from other past adaptations. Robin is a wealthy English lord who has returned home to England after spending years fighting in The Crusades. Upon is his return, Robin finds that his father has been killed and his title and lands stripped from him by the evil Sheriff of Nottingham. Robin retreats into Sherwood Forrest where he and a band of merry outlaws set about robbing the rich in order to alleviate the sorrows of the poor. We’ve got arrows, maidens in distress, epic swordplay, and a drunk Friar that we can all truly be proud of. With all of these elements assembled properly, along with a daringly new look and feel to top them off, this movie must certainly bask in the warm glow of adulation from audiences and critics alike.

Well, with a gross of $165,000,000, you can see that I was right about audiences digging it. Critics, on the other hand, were not quite as ecstatic, and the film currently holds a 50% rating on rottentomatoes.com. And while I certainly have nothing but respect for these fine critics, I can’t help but feel like they’re a little off in their hatred for this film. If you scroll through the reviews, you will see a common chain of complaints throughout most of them. The most common of the gripes being that the movie doesn’t know what it wants to be, and that Costner is not very good in the role, or, more specifically, he does not look like he has invested any thought or energy into the part. I’ll start with the latter complaint first. Yes, indeed, Costner’s version of Robin Hood is certainly a departure from earlier incarnations, as there is a bit more steel and heartache underneath his impish exterior. This is a man who has just come home from war. He was imprisoned for 5 years and also witnessed the savage murder of his best friend. And then, to top it all off, he arrives home to find his father brutally murdered and all of his property stolen. So, if there are moments in the movie where Robin acts a bit more serious or pensive than we’re used to seeing, then I’m willing to forgive it. You’re also seeing a leader of men having to actually face the challenges and the hard choices one has to make when they assume that role.

That being said, I will admit that maybe Costner was not the perfect choice for the role, but physically, he does the role justice and his energy more than makes up for any oddities in his performance that folks may care to point out. You see, Robin Hood himself is a perfect example of what the filmmakers were trying to pull off. They wanted to take the feeling of a classic swashbuckling epic and ground it with history and realism. Robin has been affected by the terrible events in his life, but the youthful exuberance and mischievous nature that has defined Robin Hood so well in the past is still alive within him. So, for those that wonder why Robin seems to occasionally suffer from mood swings, just consider that he is a man in the midst of tragedy that is still trying to maintain his sanity and sense of self.

In regards to the complaints about the movie not knowing what it is trying to do, I have to wonder if anybody was actually paying attention to the movie. The filmmakers attempted to take the classic Robin Hood story beyond the cut-and-dry “rob from the rich to give to the poor” storyline, and I, for one, think they succeeded. This is a film with consequences. You don’t just stand up and decide to lead people in a fight against tyranny. There are lives and many other things to consider, including whether or not the fight itself is being fought for personal gain or an actual desire to help those in need. Robin Hood and his merry band have several success in their fight against the Sheriff throughout the film, but for every victory, the good guys must also suffer horrible repercussions. This element of the film speaks of sacrifice and the question of how far should one go before they end up destroying the very things they’re trying to protect. These are powerful themes that show the filmmakers were anything but clueless about what they wanted for their film.

There is, however, one criticism of the film that I do sort of agree with. The tone of the movie is a little unbalanced from time to time. Again, I understand that they are trying to combine classic adventure with a darker tone and a more tactile world, but there are times when those ideas don’t quite blend together as well as they should. I love the film’s climax, but even I have to admit that there are moments of comedy that seem a trifle out of place. Plus, there is a scene where Morgan Freeman’s character rouses the villagers to come to Robin Hood’s aid, but ultimately they really contribute nothing to the cause. It’s a great speech that really works more as a device to show Freeman’s true belief in what Robin Hood is trying to accomplish, as opposed to changing up the actual conflict itself. The final scenes are fraught with tension and wonderful action, but it does fail in some sense to achieve a good balance when they attempt to get a little tongue and cheek.

Robin Hood: Prince of Thieves is an exciting and incredibly fun adventure that is layered with ideas of hope, honor, and tolerance. The filmmakers definitely had a vision, and, for the most part, I think it’s realized quite nicely in the end results. There may be a few bumps in the road here and there, but none so big that they diminish the film’s impact or my affection for it in any way.