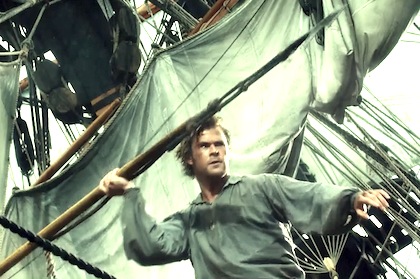 “In August of 1819 an expedition began...” If you don’t know what the expedition is, let me fill you in on what In the Heart of the Sea LOOKS like it’s about… Moby Dick.

That’s right, Chris Hemsworth (a living God to many Thor fans and ladies) is re-teaming up with director and former “Happy Days” geek Ron Howard to take down the famous bull sperm whale in Howard’s latest film, In the Heart of the Sea. Take a look at the trailer:

This film will stray from Herman Melville’s classic novel Moby Dick, though, because it isn’t actually based on it. In the Heart of the Sea is instead based on the events that inspired Melville's novel, so there’s no Captain Ahab here. Instead, the captain is Captain George Pollard Jr., played by actor and comedian Benjamin Walker (he played Honest Abe in Abraham Lincoln: Vampire Hunter). Hemsworth’s role is that of the first mate, Owen Chase.

Chase served as first mate on the ship The Essex and wrote about his experiences with the whale which Moby Dick is based on in a memoir entitled Narrative of the Most Extraordinary and Distressing Shipwreck of the Whale-Ship Essex. Chase lived until he was 71, but just because he lived through this frightening ordeal with the whale (or "the demon", as the crew referred to it) doesn’t mean that it wasn’t a rough time. At one point, Chase and some other surviving crew members were marooned somewhere around South America. Times were rough as they just sort of drifted around aimlessly without many rations, so naturally people started to resort to eating their the dead to survive, Chase included.

Whether or not cannibalism will be depicted in this film, I have no idea, but a guy can dream, right?  But seriously, people eating other people aside here, it’s safe to say that things are going to get hectic for Hemsworth and crew. I mean, did you see that giant whale terrorizing their ship?? And how about those epic screams from Hemsworth that we couldn’t hear, overlaid with tension building dramatic music? That’s how you know things are going to get crazy real quick!

In the Heart of the Sea isn’t due to be released until March 15, 2015, which you may think is a while from now, and you’re absolutely right about that. Until then, enjoy this clip of Hemsworth in our own YH Studio!