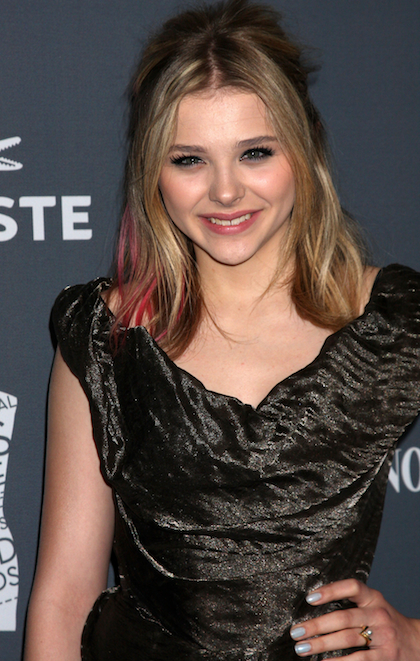 Spooky-awesome! SPAWESOME!
MGM announced today that freakishly talented actress and good friend of YH, Chloe Moretz, has been tapped to take on the lead role in an upcoming remake of Stephen King’s classic horror flick, Carrie!
Total disclosure: I am, like many, not the biggest fan of remaking classic films, and the original Carrie happens to be one of my favorites of all time. But when done right, a remake can not only stand firmly on its own but can be a respectable compliment to its original. Case in point, last year’s Fright Night, which took an 80s flick that has a special place in my heart and made it into something completely new without losing the impact and appeal of the original. Casting certainly doesn’t hurt, and that’s why I am very intrigued to hear of Ms. Moretz getting to don the pig’s blood!
For those who haven’t seen the 1976 Brian De Palma classic… uhh, go out and do that right now. No, really. I’ll wait.
OR just watch the video below to see the climatic scene from the original. Watch how De Palma builds the suspense and his use of split screen to maximize the carnage that ensues when those beyotches cross Carrie one time too many:
This is what you have to look forward to in the remake, but with Chloe doing the mind-f***ing. Not sure how De Palma’s efforts could possibly be improved upon though…
That challenge will be taken on by Kimberly Pierce, who directed Hilary Swank to Oscar glory in Boys Don’t Cry. Sissy Spacek got an Oscar nom for her performance in Carrie, so it’s not out of the question that, if Chloe pulls this off, she could find herself on Oscar’s good side too… Just sayin!
The only possible point of contention might be whether or not we would actually buy Chloe as a tortured, bullied-to-the-brink-of-homicide teenager. Anyone who has read the original book (i.e.: me) knows that Carrie actually looked more like Melissa McCarthy in Bridesmaids than Chloe Moretz. We know Chloe can do creepy – Let Me In was a perfect indicator of that. But her character in that movie was also supposed to be alluring. Carrie is a straight-up hot mess. We know Chloe has the acting chops to pull it off, but will she (and the make-up crew) be able to make us believe that she’s an ugly duckling and a social pariah? I look forward to finding out!
What do you guys think of this casting news? Yay or nay?
(Image via Nikki Nelson/WENN)
- Katie Marzullo, YH Staff Editor
[email protected]