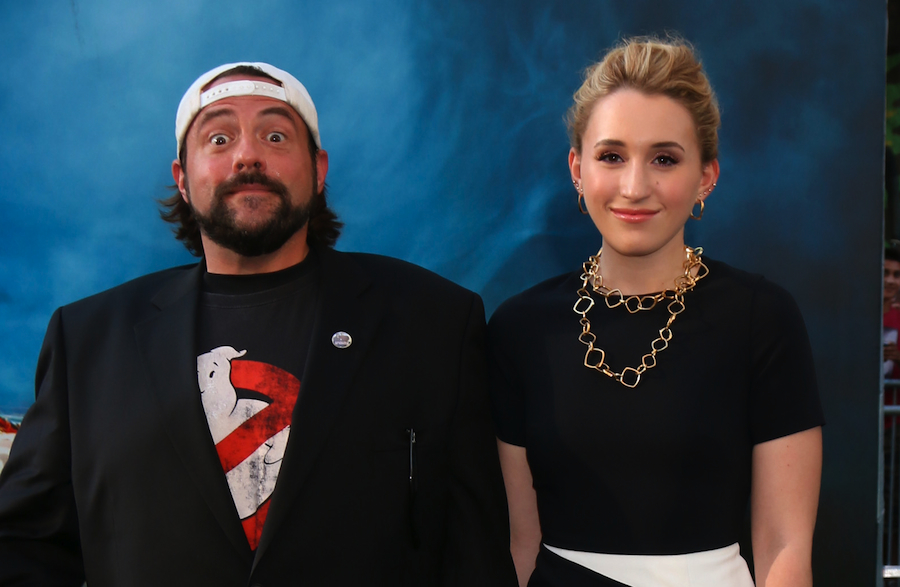 During the chaos of Comic-Con, I had a moment to relax and chat with director extraordinaire Kevin Smith and his daughter (and up-and-coming actress) Harley Quinn Smithregarding their new film, Yoga Hosers. Considered a follow-up to Tusk, Yoga Hosers follows Colleen and Colleen (Smith and Lily-Rose Depp, both reprising their roles from Tusk), two Canadian teenagers who love yoga but despise their after-school job at the convenience store Eh-2-Zed. One night, while on their phones, they learn that ancient “brazis” (nazis made out of bratwurst) lurk beneath their store -- and, worst of all, threaten their invite to a Grade 12 party. With the help of Guy Lapointe (Johnny Depp) and their knowledge of yoga, the girls take on the evil forces and prove that girls can kick just as much butt as the boys!

During our chat, the Smiths filled me in on what it’s like to work with each other, who Colleen would cosplay as, and what to say when you’re in Canada:

YH: You two are working together again on Yoga Hosers. What is it like to work with each other?

KS: For me, it’s phenomenal. I have done this job much longer than she has, so for her, everything is new and fun. But for me, it’s old and I’ve done this a few times. It’s not that you don’t appreciate it; it’s just you’ve been through it. When she’s thrown into the mix, suddenly it’s all new again and it’s interesting in a way that it hasn’t been since I first started doing this 22 years ago. You get to do the journey again with someone who hasn’t gone through it. I have useful information that I can pass off to someone in the family, someone in the blood, who likes this world. I thought she was going to be in music, but here she is in film. I don’t know, maybe it’s because I’m helping my daughter achieve her dreams, or it’s like, "Hey! She’s interested in this. What a hoot that I can make TV and film with her." For me, it makes it fun again.

HQS: I think it allowed us to get to know each other in a way that we haven’t really before, because we obviously have a father/daughter relationship, but then we got to connect on another level and share an appreciation and love for art that we haven’t been able to before. We listen to the same music and watch the same shows, but this was a whole new level.

KS: It’s also one thing (for her) to say, “Oh I know what he does, he makes movies,” but it’s a whole another thing to say, “Oh I know whatwe do. We make movies.” Most of her life (of course), the relationship has been parent/kid -- on a set, you’re just artists together. One is a director, and one is an actor, but you’re still just making pretend together. That’s a different vibe than, “Hey, make sure you make your bed.” Suddenly, the same things I’ve enjoyed doing most of my life with Jason Mewes or Alan Rickman, I get to enjoy with her. It’s not this abstract for her anymore. We get to make movies together. That makes it that much more special for me.

YH: The film, Yoga Hosers, does have a rather Scott Pilgrim feel to it with the incorporation of social media and comic text. Did either of you pull any inspiration from that, or from any specific comics?

KS: No, my inspiration for it was Strange Brew, about Bob & Doug McKenzie [Dave Thomas and Rick Moranis] from the '80s. This movie, for me, is like GirlsStrange Brew. But the inclusion of social media was crucial. How could you make a story about two teenage girls in this day and age that didn’t involve cell phones? That was also a big part of their characters in Tusk, the movie we spun out of. We saw them at the convenience store, where they were constantly on their phones. This was an extension of that. When I wanted to make Yoga Hosers, I thought about what we knew about these characters -- they hate Americans, and they live in their phones. There have been so many movies and TV shows now where, when someone texts, you get to see it on the screen. I hadn’t actually done that particular trope as a writer yet, where someone is texting, and so this seemed like the opportune moment to do that. We started to include the graphics and the hashtags for their "Instacam" page as a take on Instagram. I love [Scott Pilgrim director] Edgar [Wright], but no. I remember when the trailer went up, a lot of people said, “Oh this looks like Scott Pilgrim,” but I hadn’t thought of that.

YH: Harley, if your character Colleen M were to come to Comic-Con, who do you think she would cosplay as?

HQS: That’s a really good question. I’ve always related her to the Powerpuff Girl Bubbles. I think that she’s kind of similar to her. They’re both not the quickest or smartest of their bunch, but underneath, they’re both super sweet, and Colleen really loves the other Colleen, and Bubbles loves the other two Powerpuffs. So I think if there is a way to cosplay as Bubbles without being extremely creepy with the big eyes, I think she would cosplay as her.

YH: Harley, you are getting to work with Lily-Rose Depp, a good friend of yours. What is it like to work with one of your best friends?

HQS: It’s a dream come true. You never think you’re going to get to work with some of the people you love the most, so it was definitely an extremely comfortable introduction to a very chaotic world of filming. Having it be both of our first experiences in film, it was really nice to go into it together and have each other for support because we were both in the same exact boat. We will always have done our first movie together, so that will always be something special.

YH: Harley, you are named after one of the most iconic Batmancharacters. Do you have a favorite Harley Quinn, out of all the different iterations of her?

YH: Since the film is set in Canada, can you teach us a few Canadianisms?

KS: We lean kind of heavily on the cartoony “aboot” that Americans hear when Canadians speak. The “eh” (for those who are too young to remember) that came directly from Strange Brew. A specific Canadian stereotype is to end every statement with a question, as though it is asked, such as “How you doin, eh?” If you ever hear the “eh” in real life, it instantly identifies you as a Canadian. It’s definitely a cartoony portrait of Canada. It’s not like the film is Canada today. I don’t even know any Canadian teenagers that use “eh”.

HQS: Do you know any Canadian teenagers?

KS: That’s a good point. I almost know none. I have to rectify that. Because the American teens I know… 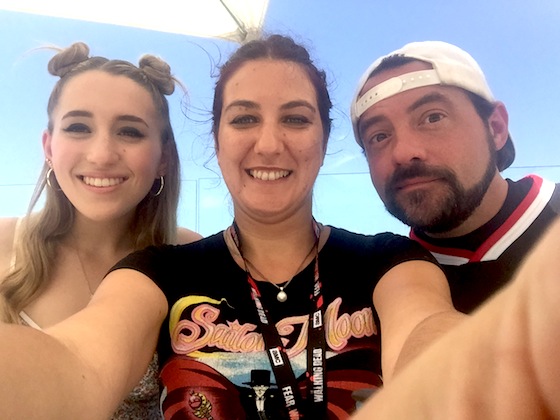