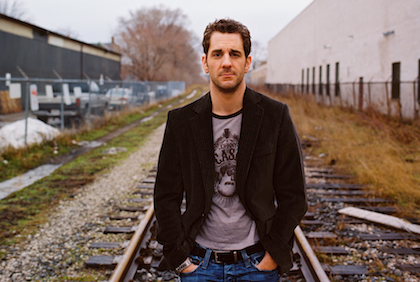 Aaron Abrams stars as Brian Zeller in NBC's “Hannibal”, a behavioral scientist who uses his medical degree to determine the cause of death in victims. “Hannibal” itself, which premieres tonight at 10pm, is based off of the characters made famous in films like Silence of the Lambs and Red Dragon and follows the famed killer Hannibal Lecter before he was caught and imprisoned for his gruesome crimes. Hugh Dancy, Laurence Fishburne, Mads Mikkelsen, Caroline Dhavernas, Lara Jean Chorostecki, Hettienne Park, and Scott Thompson also star.

In addition to being an actor, Abrams is also a talented writer. He recently wrote, starred in, and co-executive produced The CW’s “L.A. Complex”, and he wrote and starred in Young People F***ing, one of the highest grossing Canadian films of all time. Although he’s known for being cast in rather villainous roles, Abrams is about as polar opposite of his slimy characters as you can imagine. Personable and extremely witty, Abrams has a rather quirky sense of humor that makes him all the more delightful.

Abrams gave me the low-down on “Hannibal”, where he got the idea for “L.A. Complex”, and where he gets his ideas for his tweets (hint: it involves cereal):

YH: Tell us a bit about your new show, "Hannibal", and your character Brian Zeller.

AA: "Hannibal" is about a criminal profiler named Will Graham, played by Hugh Dancy, who has an amazing ability to catch serial killers. However, he's mentally and emotionally unstable, so the FBI enlists the help of a psychiatrist named Hannibal Lecter... who... well, I don't want to give it away, but he has some secrets... which may or may not be that he's the most brilliant serial killers ever and loves to eat people. Spoiler alert.

I play Zeller, who's in the FBI unit along with Will. I'm a bit of a medical genius, so I can be arrogant and I often butt heads with Hugh Dancy's character and even with Laurence Fishburne’s character, who runs the unit. I don't know if you've ever tried to butt heads with a powerhouse like Laurence Fishburne but... man, it requires some serious courage. There would be some takes where his character would yell at me, and I would have to fight the urge to run out of the room and hide under the covers.

YH: How is this "Hannibal" different from the films Silence of the Lambs and Hannibal?

AA: What makes the show so interesting is that it takes place before the movies, so Hannibal isn't locked up yet. We get to see Hannibal Lecter hosting dinner parties and practicing psychology... while he's, ya know... eating people. I think it adds a whole new kind of tension. Because unlike the films, the audience is the only one who knows what Hannibal is and what he's capable of. So, every moment another character with him is suspenseful... Hannibal could be just talking about recipes or something, but you're watching and thinking "Wait, is he planning on killing somebody and cook them with that recipe? Oh no, who's he going to kill next?!" Because Hannibal is a free man and not locked in an asylum somewhere, it allows for the show to be totally unpredictable and scary.

YH: In addition to being an actor, you are also a writer. Do you have a preference between the two, and if so, why?

AA: Acting is visceral, social, and emotional. For me, writing is rewarding, but it's often cerebral, lonely, and grueling. I've put it like this: acting is like painting, it’s like exploring all the different colors. Writing is like working on a Rubik’s cube, trying to get all the colors to line up. Unless you're like Will Smith from that movie, working on a Rubik's cube is going to take a long time and give you a brain cramp after a while. It's not the most fun way to spend your weekend.

YH: Where did the idea for "L.A. Complex" come from?

AA: I think the idea of having a rundown motel in L.A. came out of it just being the perfect place to springboard into the kind of stories we wanted to tell. Shows like "Entourage" showed the shiny, glitzy side of L.A., but we were more interested in the dirtiness of it, kind of like modern-day moral fables, where Hollywood wasn't so much a magical place where stars are born... but more a "horrible monster eating the souls and dreams of bright-eyed young people." I mean, that's like a slight exaggeration I guess, but the idea of "Hollywood" was certainly the villain of that show. And what better way to show the reality of Hollywood than to have all these perfect-looking, beautiful 20-year-olds stuck living on filthy mattresses on the floor of a fleabag motel?

YH: You tend to play a lot of villains. Do you have more fun playing the bad guy over the good guy? (I know that I would!)

AA: It's super fun to be jerky. I love being good guys too, you get to kiss the girl or you get to be the funny sidekick... but being a bad guy is more freeing, there are less rules. Good guys have to be redeemable, likable, and sympathetic. Bad guys don’t have to do any of that if they don't want. It's like playing Nintendo with cheats on. And now that I've played a bunch of jerks in a row, it’s doubly fun to find ways to make them all different. I'm constantly discovering new ways to be unlikable. As I hear myself say that, I get how that's totally a weird thing to have be part of a job. But, yeah. It's super fun.

YH: Your controversial film, Young People F***ing, is one of the highest grossing Canadian films of all time. Can you tell us a bit about what it was like to make this film, and how you feel about making such a successful and unique film?

AA: It was a bit of a hurricane. We got the money, shot it, and premiered at the Toronto International Film Festival in less than 10 months, which is crazy. Things don't usually happen that fast. Then people reacted the way they did... it was all very surprising. It's weird when strangers are coming up and referring to you as "the guy from that f*** movie", but y’know. I'll take it. Hopefully my parents are proud.

As far as its "uniqueness", I think that’s something you're particularly focused on with your first feature. You want to show you can bring something new. At the time, romantic comedies always ended with the first kiss and sex comedies were like these fun silly romps. There was no romantic comedy that was also very adult. So we tried to push that envelope and see how adult and how dirty we could make something that was still romantic. In fact, I kind of think all that dirtiness is what helps make it romantic... but what do I know. I made a movie with a swear in the title.

YH: I really enjoy reading your tweets. Do you plan them out the way that some comedians/actors do (it's been said that some will tweet only their best joke once a day), or are they just your musings throughout the day? Either way, they're hilarious!

AA: Wow, I wish I had an intricate process that I could answer with, like "I sit cross legged on the floor and listen to the Dirty Dancing soundtrack on repeat until a tweet appears in mind’s eye," or something, but really I'll just be eating a bowl of cereal and then think something dumb about farts and pound it out on my iPhone. Is that a fair answer? I dunno. What does Rob Delaney say?

YH: Can you give us a little sneak peek on what will happen on "Hannibal" this season?

AA: It will have to be the sneakiest of peeks, because it's one of those things that just has so many twists and turns that if I say anything, it will spoil the awesomeness. I will say that it’s unlike anything that’s on TV, both visually and tone-wise. It’s a gorgeous-looking show, rich with color and style, but it’s also insanely creepy and suspenseful. It's less a killer-with-a-hockey-mask-leaping-out-of-the-closet-with-an-axe and more a devil-in-an-elegant-suit-he's-slowly-walking-toward-you-and-you-try-to-wake-up-from-the-nightmare-before-he-gets-to-you... but you can't. It’s some real edge-of-your-seat stuff. I can't wait for it to give the world nightmares.