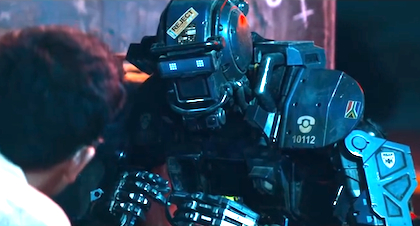 I’m over here worried about Skynet taking over when maybe it's the robots we should have been worrying about...

The new robot film, Chappie, is a story set in a world where A.I. robots are used by the police force to help protect and serve. In this world, a new sentient robot, developed by the creator of the A.I. robots, must learn how to live and fight those who have set out to destroy him.

The film is directed by Neill Blomkamp, the director of District 9,Elysium, and the new installment of the Aliens franchise -- it remains to be seen if he will be continuing the story or possibly even rebooting the franchise, so we will let you all know when details about that arise. But for now, check out the trailer for his film, Chappie.

Thoughts? Hugh Jackman, I am not digging that hair. Yes, that is Dev Patel from Slumdog Millionaire. Did it look a bit familiar though? If not, let me help y’all out.

Just from watching the trailer, we see similar scenes in both films, as well as a similar body and amour structure of Chappie himself. The real question, though, is how similar the remake will be to the plot.

One thing is for sure, Blomkamp has a very distinct directing style. Check out this clip from the movie:

Remind you of the surroundings of District 9 and crazy action and fighting sequences from Elysium?

What I’m interested in is the social commentary that Blomkamp usually works into his films. Ideas of xenophobia or political warfare come to mind. Or, from the looks of this clip, violence and crime are topics up for debate.

Or maybe the question we should ask is, “Is this where we are headed? Will robots become a larger presence in our society?” I don’t know about you all, but I saw I,Robot. And should I mention Terminator again? I’m very interested to see where Blomkamp takes this opportunity to touch upon robots and their possible role in society.

For more information and behind the scenes on Chappie, check out the official website!