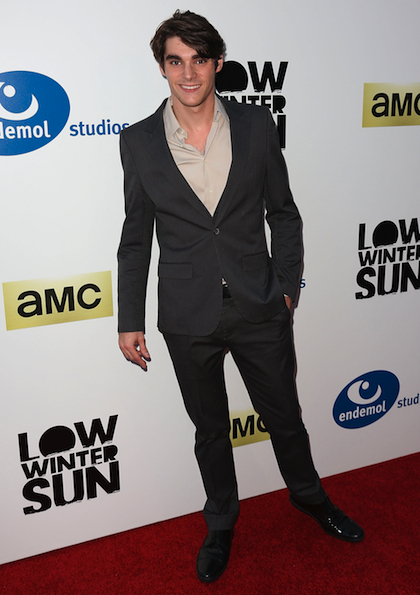 R.J Mitte plays Walter White Jr. (AKA Flynn) on the Emmy-winning show, “Breaking Bad”. On the show, his character is portrayed as a teenager who has cerebral palsy (Mr. Mitte himself also has cerebral palsy, although a much milder form than Flynn’s), loves fast cars, breakfast, and has remained one of the only innocent characters on the show.

In addition to starring on “Breaking Bad”, Mr. Mitte recently starred in the supernatural thriller House of Last Things and appeared as himself in the documentary chronicling the ever-changing portrayals of disabilities in film, CinemAbility. For the past six years, he has worked with many organizations to help raise awareness about equality and diversity, as well as help join the fight against bullying.

This is the  second time I’ve gotten to chat with Mr. Mitte, and once again, it was great fun. He told me about the final eight episodes of “Breaking Bad”, how to get a dapper sense of style, and why he doesn’t mind chatting about breakfast:

YH: Can we get a hint of what’s going to happen in the grand finale of “Breaking Bad”?

RM: The first episode is the mellowest, but it’s not very mellow. The writers did such an amazing job. This last season was a blast. I think that what they have created is amazing. The fans are really going to love it. There might be a few explosions.

YH: Were you surprised by the final script?

RM: Yes and no. I was surprised by the final script, but it was an inevitable ending. The way it came about was really good. And how it ends, how it comes together, is an amazing ending to an amazing series.

YH: Has Flynn ended up where you thought he would when you first started filming the show?

RM: It surprised me a little bit. I think the main thing about the characters on our show is that you want them to grow and change into something completely different by the end of all the seasons. Even if it’s not the direction you want the character to go in, it’s a very valid decision. In real life, you don’t always get what you want. There are a lot of obstacles. Each of the characters have to go through those obstacles. It’s really amazing how it all comes together.

YH: You recently starred in the film House of Last Things, which aired at the Paris Film Festival. What was that experience like?

RM: House of Last Things was filmed in Portland. We went to Paris to show it at the film festival. I love Paris. It’s so beautiful there. It should be coming out this year. It’s being shown around at film festivals in Germany, South America, really all over. I did film a short in Paris. House of Last Things was fun to shoot. It’s a supernatural thriller. The director, Michael Bartlett, was amazing. It was really a creative story. I’m excited to see it released. We filmed it a while back. We have great people in it, Lindsey Haun and Blake Berris, they are the stars and they are amazing. We became very good friends and still are today.

YH: Over the years, you have developed quite a dapper sense of style. Got any tips for our readers on how to look dapper?

YH: When you, the cast, and crew were not filming, what did you like to do in New Mexico?

RM: There’s so much stuff to do in New Mexico. There’s great food. There’s hiking, exploring. We didn’t really have a lot of free time. There’s Nob Hill, Uptown, the gym. New Mexico is a great place for training because of the altitude. I know that a lot of people go to train there because of the altitude. It’s 6,000 feet above sea level. I went fly fishing about four hours north of Albuquerque. It was so much fun. There’s so much to do. It’s nice, we’re all gonna miss it. I know that everyone on the show is going to miss it.

YH: You were also part of the documentary CinemAbility. Can you tell us a bit about that?

RM: They just had the premiere. It goes through a whole list of things. It’s really great. The director and creator, Jenni Gold, she brought in the collective of her countless years. She did such an amazing job. It’s such an inspiring and telling movie. They are also doing the New York and D.C. premiere. It was really good. We’re not quite sure when it’s going to be released yet -- hopefully soon! -- but people can definitely check out information about it. There are videos online of it. It’s such a great movie that is so inspiring to people with disabilities.

RM: I just shot a music video for a friend of mine who’s in the band Hollywood Undead. Luckily I don’t sing in it. [laughs] It’s fun. I’m going from there and seeing what’s next. I will be shooting a film in Paris,“Breaking Bad” is coming out, I’m still shooting a documentary on a missing person’s case... It’s going really good, we’re nearly finished. We have three or four interviews left and then we’re done with everything. We have a couple of companies that are interested in it, which is exciting. We’re going to see what happens next.

YH: How do you feel “Breaking Bad” has changed your life?

YH: Do you ever get tired of people asking you about breakfast?

RM: Yes, but it’s all good. [laughs] That’s kind of the character, and people can relate to me, so I don’t mind it. I don’t really ever eat breakfast though, it’s funny. I really just eat breakfast on the show. When I do have breakfast, I eat bacon. I’m definitely a big bacon person! You can never go wrong with bacon.