Bill Hader is one BFG 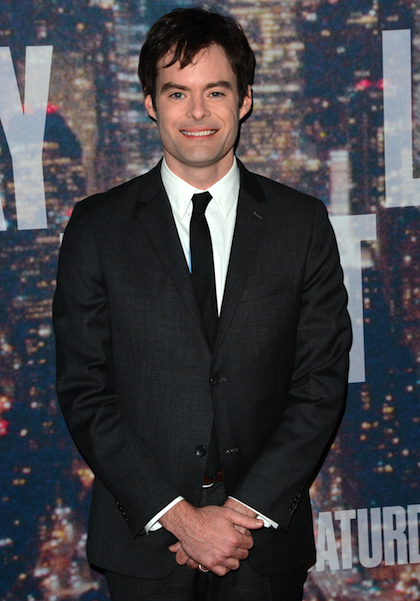 Bill Hader is known for many things, from his different voices and cartoonish nature, to his ability to contort his body comically and just being one hell of an actor. The man has got all the ingredients to play a big, friendly giant.

Hader recently signed on to play a giant in the upcoming Steven Spielberg film adaptation of the Roald Dahl story The BFG, which stands for (you guessed it) “Big Friendly Giant”. (Dahl was ahead of his time knowing we would refer to everything by acronyms, like Charlie and the Chocolate Factory was originally titled as CatCF. It really flows off your tongue.) The BFG follows the story of a young girl named Sophie (most likely named after Dahl’s granddaughter of the same name), a friendly big-eared giant, and (oddly enough) the Queen of England as they team up to take down a bunch of evil giants who are hell-bent on eating people. It’s just what giants do.

Among the giants are the Fleshlumpeater, the Bonecruncher, the Manhugger, the Childchewer, the Meatdripper, the Gizzardgulper, the Maidmasher, the Bloodbottler, and, to shake things up, the Butcher Boy. It has not been announced which of these giants Hader will play, but the odds are in his favor that he will grinding bones to make his bread since Mark Rylance has already signed on to play the BFG himself. It’s cool, but Hader seems like a nice guy in real life, though, so it isn’t a far stretch that he could’ve been the BFG. But, hey, with all of these flesh-starved giants with really scary names around, somebody has got to fill those roles, and there is nobody better in Hollywood today than Hader to play one of them.

So, which one will Hader play? Just going off the names, I would say the Fleshlumpeater. (Yes, that is one word.) Something about Bill Hader as a giant just has me thinking that he would eat the flesh lumps off of people. Also, Giant Hader seems like he would have a very specific set of taste buds.

BTW, this isn’t the first time that The BFG has been adapted to film either. On Christmas of 1989, an animated film version was released in the U.K. on their Disney Channel affiliate. We have the trailer for you to check out below if you would like to get an idea of what to expect from the Spielberg version:

(If you dug this, then there are links everywhere that will let you watch it for free on YouTube. Enjoy!)

That’s pretty much it, folks. Whether Hader is playing the BFG or any number of the evil giants ready to eat people, he will be a perfect giant. He’s a tall and lanky dude and, with my small stature, he looks like a giant to me already and, yes, it’s intimidating. E.T. screenwriter Melissa Mathison has already adapted The BFG for the screen, so stay tuned!