After 26 Seasons, Sideshow Bob to Finally Get His Revenge on Bart Simpson 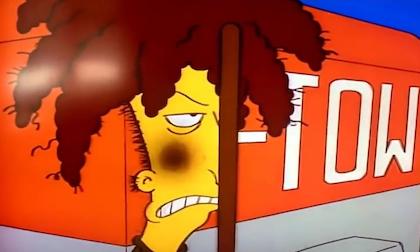 Known for serving palm tree hair and his hatred of rakes, Sideshow Bob is one of the greatest villains“ The Simpsons” has ever known. Voiced by Kelsey Grammer, Sideshow Bob was first introduced as the silent sidekick of Krusty the Clown. After years of being abused by his boss, Sideshow Bob framed Krusty for murder and created a much more intellectual version of his show. And he would have gotten away with it too, if it hadn't been for that meddlesome Bart Simpson, who (with the help of Lisa, natch) figured out Sideshow Bob’s master plan. Ever since then, Sideshow Bob has attempted to kill Bart in a variety of ways and, after 26 seasons, has yet to succeed...

In this take on the classic film noir, Bart receives a series of threatening letters, all of which have been penned in blood. He is certain that the letters are from Sideshow Bob, who charms his way out of jail by explaining to the parole board that his tattoo that reads “Die Bart Die” is actually German for “The Bart The”. The Simpsons run into Sideshow Bob at a movie theater and, for their own protection, are put into the witness protection program and relocated to Cape Feare. Sideshow Bob tracks them down and manages to kidnap Bart, but instead of just killing him, he fulfills Bart’s request to sing the entire H.M.S. Pinafore. Bart’s clever stalling tactic gives the rest of his family enough time to contact the police, who then arrest Bob.

Why this is one of the best: Sideshow Bob sings the entire H.M.S. Pinafore, and it’s fantastic. This also introduced fans to Sideshow Bob’s other greatest foe: rakes.

This episode proves just how deep Sideshow Bob's vengeance toward Bart goes -- He ends up marrying Bart's Aunt Selma. Selma decides to take Sideshow Bob up as a prison pen pal, and he decides to marry her. The pair hit a few snags (ex: Sideshow Bob does not understand her love for "MacGuyver") but begin their lives as one happily enough... until Bart figures out that Sideshow Bob plans to blow up his aunt! After attempting to explain this to Homer multiple times, Bart turns to his mother, and, once again, Sideshow Bob is foiled.

Why this is one of the best: I rather enjoy all of Sideshow Bob’s reasons as to why he hates "McGuyver".

This is the one time where the evil plan wasn’t actually Sideshow Bob’s fault -- it was his brother’s! In this great episode, it’s revealed that Sideshow Bob has a brother, Cecil (David Hyde Pierce, who also played Kelsey Grammer's brother on "Frasier", hence the episode title), who actually wanted to be Krusty’s sidekick. Sideshow Bob came along to Cecil’s audition and ended up getting the part instead -- a fact that Cecil has never forgotten. We meet Cecil as he agrees to hire Sideshow Bob (who is now reformed and has been released from prison) to overlook the construction of the Springfield Dam. Naturally, Bart and Lisa believe that Sideshow Bob is up to something, and they follow him around relentlessly, going so far as to ruin his only chance with Bart’s teacher, Edna Krappabel. Bart and Lisa do eventually find thousands of dollars that have been embezzeled, but it turns out that the embezzler isn’t Sideshow Bob but Cecil, who is planning to blow up the dam. In an ironic twist, Sideshow Bob ends up saving Bart’s life -- only to be wrongly put in jail with his brother.

Why this is one of the best: There are so many great moments. Just to name a a couple: Cecil’s failed audition is hilarious, and marks the beginning of Sideshow Bob’s abuse at the hands of Krusty; Sideshow Bob’s interactions with the construction workers (all of whom are, in typical “Simpsons” fashion, idiots).

Sideshow Bob steals an H-Bomb and ransoms an air show.

Sideshow Bob rigs an election and becomes the mayor, only to build a Matlock Expressway directly above the Simpsons' house. This episode introduces us to the Republican Party of Springfield, which consists entirely of Sideshow Bob, Mr. Burns, and Dracula. I particularly enjoyed his campaign ad:

How do YOU think Sideshow Bob will finally dispatch Bart Simpson this season?