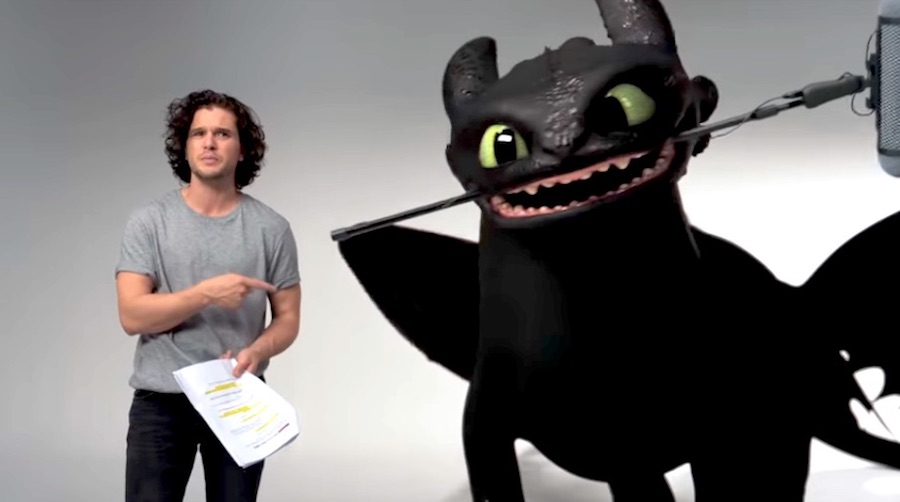 The King In The North has little time for jokes and humor, but contrary to what you might believe, Kit Harington, is one funny guy. Ahead of the release of the third chapter of the How to Train Your Dragon series, Harington took part in a new promo depicting his never-before-seen audition tape for his role of Eret, Son of Eret. However, Harington was lucky enough to read lines opposite the film’s biggest star, Toothless. Though, watching the entire audition tape, Harington would probably admit that he wasn’t so lucky.

Much admired for his ability to swing a sword and partake in dramatic dialogues, it’s always a nice surprise to see Harington show off his rather impressive comedic abilities. He always has fun doing goofy skits on late shows, such as his portrayal of the moody Jon Snow attending a quaint dinner party with Seth Myers:

And who could forget another one of Harington’s audition tapes, when he showed off his performative range trying out for a handful of "Game of Thrones" characters, including Cersei, Ygritte, Hodor, and more. Jon Snow really knows how to put on a show! Maybe he does know something after all…

However, few roles have given Harington enough freedom than that of Eret from the Dragons series. He’s strong, a bit obnoxious, and turns out to have a heart of gold, and despite not being present in any of the final chapters’ promotions, he’s still one of the biggest reasons why fans are excited for the film’s release!

How to Train Your Dragon: The Hidden World will hit theaters February 22, 2019.

In the meanwhile, here’s a video of Harington singing a spoof of the song "Wild Thing" (appropriately renamed "Wildling") to his wife and former GoT bae Rose Leslie. Those two will forever melt our hearts.