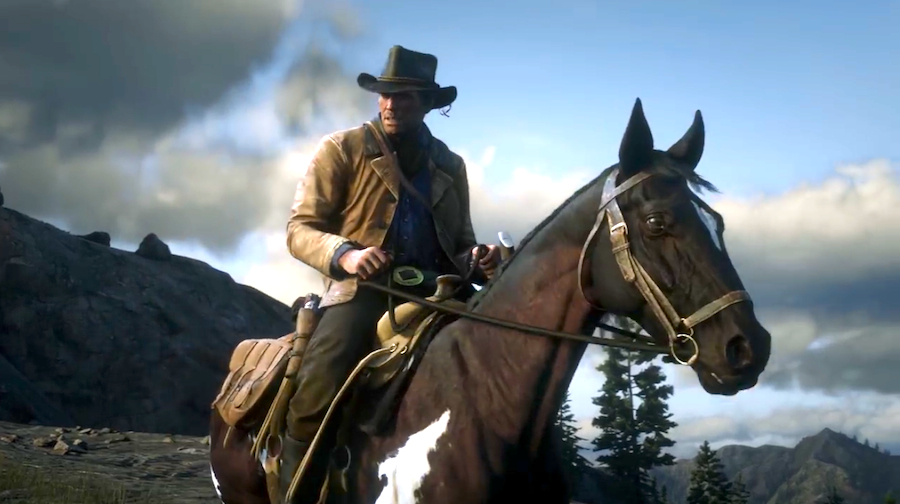 The last time I played a story-mode video game, I was 9 and it was theHarry Potter and the Chamber of Secrets on myPlaystation 1. In an effort to get me to like “girlier” stuff (spoiler alert: it didn’t work) and encourage me to make some actual friends, my mom took away my PS1 and I never got to really play again. While this could turn into a moral story about accepting your child’s personality and defying gender rules (my mom learned both of those lessons in later years), it is really a story of me giving my video game skills another chance by playing the newly released Red Dead Redemption 2.

For those who don’t know what that is, RDR2 is a prequel to Rockstar’s Red Dead Redemption, a Western-themed action-adventure game which came out in 2010. Think of it as Grand Theft Auto but in in the wild west. It also happens to hold the title of the single largest opening weekend in entertainment history with over $750 million revenue. As impressive as these facts are, they would have flown completely over my head if it weren’t for my roommates, Jake and Andrew, who I will talk about freely since they will most likely never read this. (Unless you guys are reading this now, in which case, hi! Sorry about your horse.)

Anyway, the game is open-world, which means that even though there is a story you can follow, you can wander around the game doing what you please. In this case, since you are an outlaw, it seems that the thing to do in your spare time is just to go rob banks, kill people, and get drunk (will go there in a sec) as the main character, Arthur Morgan, who is a lieutenant in a fictitious gang called Van der Linde.

The first of my roommates to fall captive to the RDR2 spell was Jake. He bought the game as soon as it came out and had been deep in the game play for about 2 straight days when I asked him to teach me how to play it. After diving into the RDR2 universe for almost a week, I came out with the following lessons:

Lesson 1: It’s hard to play if you are not already a player

First of all, I want to say sorry to all the badass gamer girls I will be doing a disservice to in this piece, because it turns out I grew up to be a disaster of a gamer.  As I sat down to learn the game, Jake thought it’d be good if I started by learning how to ride the horse and shoot a gun. The problem is, since things usually move pretty fast and you need to press several buttons in a specific pattern, I would often get mixed up or not be quick enough and end up getting killed.

“It’s easy,” Jake would say. “You just have to press L1 to choose your weapon, L2 to aim, and R2 to shoot.” The problem is that, when you don’t know the buttons by heart, it is a tough progression to manage. Whenever I encountered a battle, Jake would try to direct me by telling me which buttons to press (“L1, L2, no, not R1, L1! Now R2! You are pressing R1 again!”). However, because of my lack of practice, that meant I had to look at the controller and actively search for each button whenever I had to do something. I was able to memorize the locations of each command after a while, but it is definitely a challenging learning process if you are not familiar with the controllers.

Lesson 2: Horses are a big deal

By the third day of playing, Jake was the only one that had actually bought the game. He stayed up late doing missions and looking for cooler horses while Andrew and I would join him to play throughout the day. To be honest, one of the things I enjoyed the most about the game were the horses. While Andrew and Jake saw them as more of a way to upgrade their playing experience, I basically felt like I was playing a larger version of Nintendogs and spent most of my playing time just brushing and patting the horses.

One morning, we woke up to find that Jake had unlocked a special horse that only appears deep in the mountains. A beautiful white Arabian horse, it was the fastest horse he had had so far and had spent most of the morning bonding with him (which means the horse will be faster because his loyalty increases, or something of the sort).

In the afternoon, Andrew and I took turns playing the game. A woman, who seemed to be Arthur’s ex, asked for help finding her little brother. Against Andrew’s wishes to just go to the bar and get Arthur drunk, we went on the quest to find this kid who had joined a cult. After completing that mission, I left for a moment only to come back to Andrew and Jake having a discussion. Apparently, Andrew had inadvertently gotten the beautiful Arabian horse killed. When your horse dies in the game (which can happen if it gets shot, falls off a cliff, or basically anything else that would kill a horse in real life), it doesn’t just re-appear like your character does; it is gone for good. The argument ended in Jake taking his PS4 to his room and Andrew buying his own game.

Lesson 3:  But really, though, don’t mess with the horses

The first thing Andrew set out to do with his newly bought game (after getting Arthur drunk a couple of times, of course) was go look for the Arabian horse. After no less than 45 minutes of looking, fighting some wolves, and even falling off a small cliff, we finally found it. Catching it was also a difficult task, as it was faster than our current horse and would run away even after it had been lassoed, but we finally managed to do so. I requested to do all the petting and brushing and basically all the sweet bonding stuff with the horse, and we then went back to the stable. Andrew decided to name the horse Iceberg Slim.

After an hour or so of playing, it was clear why this horse was so special. It was way faster than any other of the other horses and looked so posh. We then set out to do a minor mission where we had to rob a gas tank or something. It was not too difficult of a task, but while we were leaving, a carriage of horses ran us over and we died. When we revived, we whistled for Iceberg Slim, only to find a small brown horse coming towards us. Iceberg Slim had died when the carriage ran us over. I felt like my Tamagotchi had died. Andrew found some sympathy for Jake as he set out to the mountains to try to find another Arabian horse. “Man, this sucks,” he said. “I miss my horse.” #RIPIcebergSlim

Lesson 4: Anarchy rules and the possibilities are endless

There is no denying that one of the most enjoyable parts of playing this game is being able to explore the map and do crazy things. I have read about some people that have actually ridden their horse far enough that they actually got to a place similar to Mexico! In addition to that, the ways in which this game lets you do activities that don’t have much to do with the main story or missions are countless. For instance, you can go to a bar and get so drunk that the screen gets blurry and your character has no real coordination -- he will even pass out if you give him too much. Similarly, you can change the appearance of your guy by shaving his beard (it will grow if you don’t) and feeding him well (he can actually get fatter of slimmer depending on how much you feed him). You can also find rare animals if you go to certain places, and you can have a side-gig as a hunter by selling animal pelts and meat. You can also fish, play with dogs, and rob a train. The list goes on and on, but rest assured, you are always going to find some form of entertainment outside from the already delightful story and missions.

Lesson 5: Every action has a reaction

You might be an outlaw, but that doesn't mean you get to get away with it. Everything you do in the game will have a consequence. If you are nice to people and help them, they might pay you back later in the game by doing something nice for you in return, or even giving you some sort of reward like a new gun or some money. However, if you do something bad, people in the game are good at holding grudges. One of the most recurring examples of this is committing a crime where there is a witness. Usually, they will report you and you will now have a bounty over your head that increases with every crime you commit, which is why you can’t leave any witnesses.

My first time learning how to play, Jake was teaching me how to loot a carriage. I had to shoot the driver to rob the carriage, but because I was so slow, as I was approaching the carriage, another rider went by and saw the scene of the crime. I had to kill him too, but by the time I did that, two other riders had come around! I went after them and 3 more riders appeared! I ended up handing the controller to Jake and we ended up having to kill roughly 15 people and feeling like 2 serial killers who had gone off the rails.

I have also read stories of people shooting a dog and people in the village holding a grudge for the rest of the game (I don’t judge them, I would too). In any case, it adds a sense of excitement and it definitely makes you think twice about your next move.

After a week or so, we all had to accept the fact that we had lives outside of this game. We went back to our unfinished Netflix series and our usual activities while still playing sporadically (more them than me, I must admit). However, it felt great to be able to be so invested in an interactive game again. It made me feel as if I was reading my favorite book while also being able to pause it and explore around myself. Which is why, right now, you can find me with a Harry Potter book on my hand scrolling through eBay’s listings of PS1s...