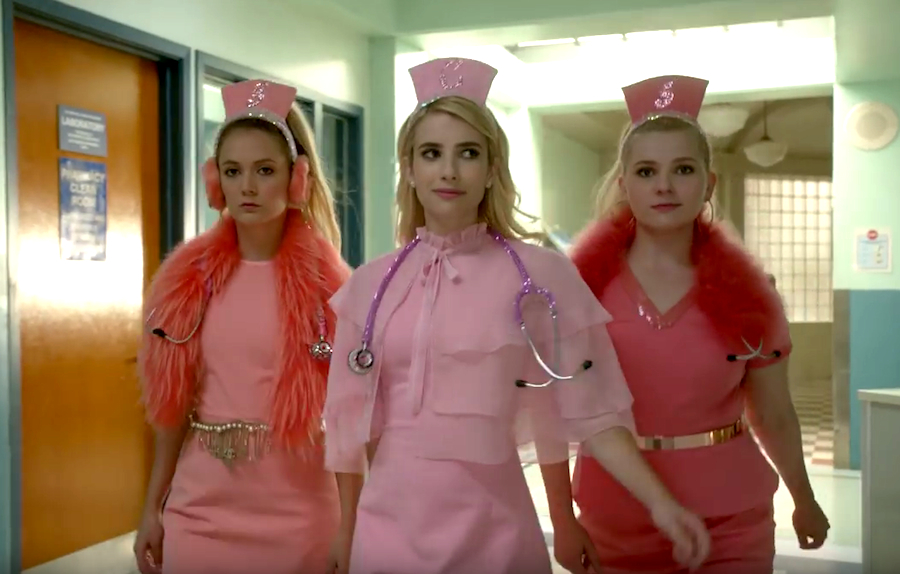 “Scream Queens” is back, and I couldn’t be more ready! The delightfully campy horror-comedy on FOX was created by the man behind some of the most memorable shows of our time, Ryan Murphy (“Glee”, “American Horror Story”). If you can conjure up an image of a “Glee” and “American Horror Story” hybrid, you essentially have this show. If you can’t imagine such a show, here is a trailer for the first season that gives you a taste of the silly spookiness.

Now that the scary campfest is back for another round of comedic murder (that’s not something you get to say everyday), we want to count down the 3 things we are most excited about for the new season!

Having a modern icon on the show is a true treat, especially since Jamie Lee was the star of my personal all-time favorite horror flick, Halloween. As Cathy Munsch, the former dean of Wallace University, Jamie Lee brings a sophisticated sass to the show, which helps balance out some of the cruder humor that the Chanels always provide. Horror has a history in her family as well, with her mom, Janet Leigh, playing the victim in the legendary shower scene in Alfred Hitchcock’s Psycho. In one Season 1 episode, Jamie Lee even recreated that very scene to pay homage to her mom but added her own feminist twist.

2. New Setting
The show’s second season has transitioned the characters away from college and into the medical world as they all begin working in a hospital, which will no doubt lead to many new scenarios for the Chanels and company, especially since hospitals are so ripe with horror-filled possibilities. Additionally, since “American Horror Story” Season 2 also took place in a hospital — well, an asylum — I’m wondering if there is any potential for references to the “Scream Queens” sister series. There probably won’t be, but a boy can dream. At least we get to see the Chanels rock their ridiculously glitzy nurse outfits.
3. Fresh Faces
Okay, this might be the most exciting part -- John Stamos and Taylor Lautner are joining the cast. Uncle Jesse and Jacob from Twilight is the weird crossover we never knew we needed, but it appears that the two will be spicing up the ward with their respective sex appeal, which is nice for those viewers who just watch the show for eye-candy.
All in all, the new season of “Scream Queens” looks like it could be just as good as the last, if not better. The new cast members are exciting enough as it is, and that teamed with a new setting and the return of the show’s standout star are all the right ingredients for a strong season.
Watch the recently released first look below!
Season 2 of "Scream Queens" premieres on September 20 on Fox. In the meantime, check out our chat with some of the Season 1 stars at last year's Comic-Con, below!
(Screenshot via YouTube)
- Mike Dolzer, YH Contributing Writer